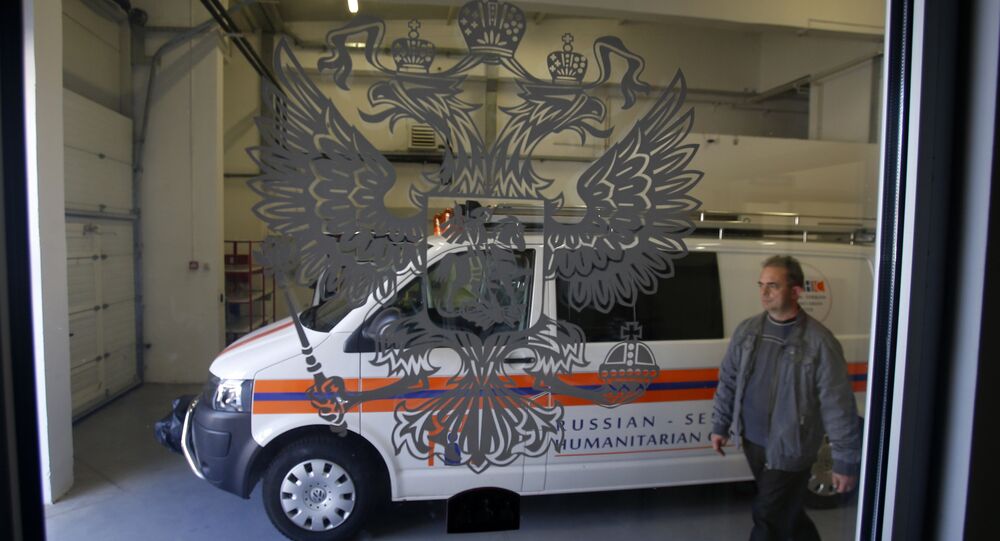 Commenting on the recent remark of the US Deputy Assistant Secretary of State that Washington is "concerned" about the Russian Humanitarian Center in Serbia and the potential special status of its staff, Serbian parliamentarian Milovan Drecun told Sputnik about the real reason behind this claim.

© Photo : Pixabay
Sowing Panic: 'Few People in Serbia Want Stabilization, American-Style'
On June 14, US Deputy Assistant Secretary of State for European and Eurasian Affairs, Hoyt Brian Yee expressed "concern" about a Russian-Serbian disaster relief center in Nis, which is located close to Serbia's border with Kosovo, while addressing the Subcommittee on Europe and Regional Security Cooperation of the US Senate Committee on Foreign Relations.

Yee then said the US was concerned about the Nis center “not so much for what it is now, but what it might become if it receives what Russia has been asking from Serbia, which is some kind of special status, a protected diplomatic status or immunity."

“If [Serbia] allows Russia to create some kind of a special center for espionage or other nefarious activities, it will lose control over part of its territory," Yee warned.

Sputnik Serbia discussed the issue with Milovan Drecun, a MP in the Serbian parliament, the head of the parliamentary commission for Kosovo and Metohija.

© AP Photo / Steven Senne
No Apology: Biden Visit Proves Serbia a US Vassal State
The US Ambassador to Serbia, Kyle Scott, also shares this "concern" over a possible setup of the so-called "spy center", even though he has never been to this base, Milovan Drecun told Sputnik.

"I've been to this center and was very impressed with the way it functions and the equipment it uses. The US should better search for spies in other places, for example, in western companies operating in Nis. It has been repeatedly said recently that there are CIA agents working in some companies under a mask of ordinary employees. It is understandable that every leading state has its own spies, however in this particular case, the claims are aimed to fully eradicate Russia's presence in Serbia," he explained.

The Serbian politician said that he recently asked Sonja Biserko, the founder and president of the Helsinki Committee for Human Rights in Serbia and Jelena Milic, the director of the Centre for Euro-Atlantic Studies in Serbia (CEAS), both known for their Russophobic stance, whether they have any idea how many hundreds of lives were saved by the employees if this humanitarian center and how many times it responded to the requests of the Slovenian government.

"We need a number of such centers in our region, not just one. It is just that some people prefer speculating and concealing facts because it is more beneficial. In the countries of the former Eastern bloc, public officials keep claiming that Russians are attacking them, interfering into their internal affairs and democratic processes…But keep quiet and consider it normal when it is done by Western countries.  There is no justice in the world. This principle has been imposed by the West and anyone who is trying to fight against it, will be bashed and defamed," Milovan Drecun said.

© REUTERS / Rick Wilking
Trump Campaign Denies Candidate Apologized to Serbia for US Bombing
The US' claims, the parliamentarian said, is a way to pressure the Serbian president and the Serbian government to close down this center. However NATO has every intention to set up a similar center somewhere in Vojvodina, an autonomous province in the northern Serbia. Let them do it.

"I think that the people working in the Serbian-Russian center should get a special status. If we have granted extremely special privileges to NATO employees operating in Serbia under the SOFA (Status of Forces Agreement), why should not we grant it to the people working in the Serbian-Russian center, who came here not with arms but to rescue the lives of our people?" Drecun questioned.

He further added that he regards all the developments around the Serbian-Russian center as political pressure within the geopolitical standoff between Russia and the US in the Balkans.

"There are structures in the US, which think that they should talk to Russia only by having it in the crosshairs. They want to eliminate Russia's presence wherever possible, eliminate its influence, threaten its interests, encircle it and finally neutralize it. Then split it up as a state and further hand over its natural resources to western companies," he told Sputnik.

© AP Photo / Dimitri Messinis
Better Late Than Never: Serbia's Idea to Sue NATO for 1999 Bombings 'Viable' - Lawyer
These people don't want to retreat once they had been able to move over the "iron curtain", expand NATO towards Russia's borders and provoke a new Cold War not just between the US and Russia, but dragging the EU, and first of all Germany into it, to make the process maximum lengthy, the parliamentarian said.

Milovan Drecun explained that these structures have been encircling Russia with military infrastructure while citing the so-called "Russian threat." They are carrying out a hybrid war and when Moscow responds, they accuse it of the so-called "aggression."

Certainly, they won't backtrack, the politician said, in a situation when they think that they have already set up a ring around Russia. Military and intelligence structures of the US will try to maintain such tense relations with Moscow, and it is easier to do through pressuring President Trump and calling him a "Putin's man."

Then Trump, he said, won't be able to do any positive step towards Russia. The rapprochement between Moscow and Washington would mean for them the removal from their final aim.

However, Milovan Drecun said, it still remains to be seen whether President Trump is able to withstand such pressure.

A rapprochement between Russia and the US will be beneficial to the mankind, while the continuation of the standoff  in the mould of the Cold War could lead to serious global problems, he concluded.