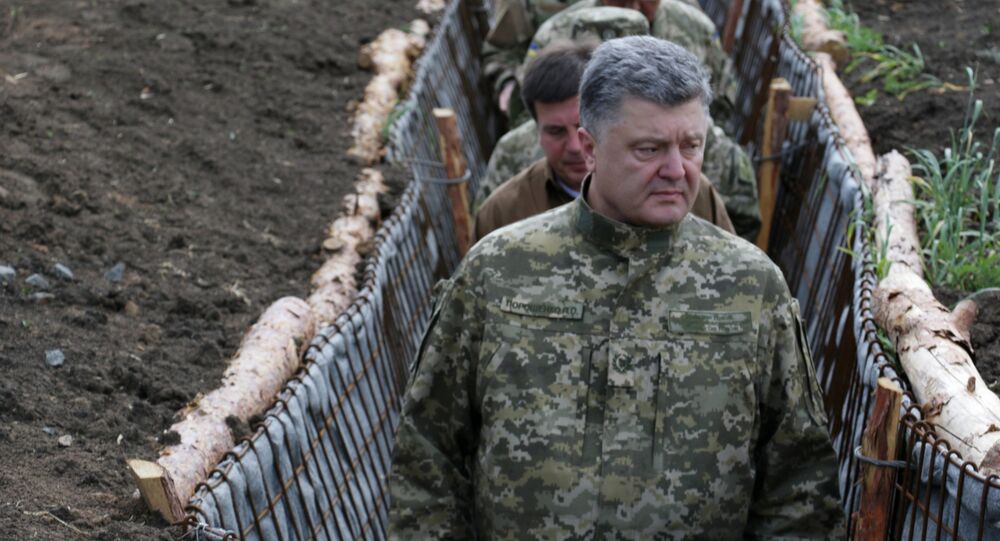 The Ukrainian government is changing its strategy on the war-torn eastern region of Donbass. According to the Russian daily newspaper Kommersant, Kiev is working on a law that presumes ending the "antiterrorism operation" in the region and conducting the "peaceful re-integration" of Donbass.

© Flickr / Heinrich-Böll-Stiftung
Donbass Settlement Plan to Be Reconsidered In Accordance With Minsk Deal
Last week, President Petro Poroshenko said that a bill on re-integrating Donbass territories would be passed in the near future. According to the president, the document contains a "package of measures needed for the implementation of [Donbass] re-integration."

A source in the Ukrainian parliament told Kommersant that the bill could be submitted to the Rada this week, while Poroshenko will be in Washington on a visit on June 19-20.

According to Kommersant, the re-integration plan was promoted by those in the Ukrainian establishment who want to keep Donbass as part of Ukraine.

"In addition, the bill presumes facilitating pension payments in the self-proclaimed republic, establishing trade between 'certain regions' and Kiev-controlled territories and easing restrictions on the weight of cargo crossing the demarcation line," according to the report.

© Sputnik / John Trast
Ukraine Drafting Legislation to Restore State Sovereignty Over Donbass
Finally, Kiev plans to end its three-year long "antiterrorism operation" in Donbass and replace it with a martial rule in the front-line areas in Donetsk and Lugansk. According to the source, a final decision has not yet been made on what areas will be affected by the measure.

"By all appearance, among them will be Mariupol, Kramatorsk, Slavyansk, Avdiivka and Mariinka, each of them controlled by Kiev," the source told Kommersant.

The source added that Kiev government sees no contradiction between martial law in Donbass and the Minsk agreements.

"A martial law doesn’t mean that Kiev is leaning towards the military option to resolve the Donbass crisis. The point is that currently those areas are controlled by the Security Service of Ukraine. But if the measure is adopted control over them will be passed to the military," the source said.

© Sputnik
Ukraine's Poroshenko Begins US Working Visit
Sources close to the matter told Kommersant that a surge in Kiev’s interest for Donbass was driven by foreign policy factors. After his meeting with Poroshenko, US President Donald Trump is expected to meet Russian President Vladimir Putin at the G20 summit in Hamburg in July. Taking this into account, the Ukrainian government wants to demonstrate that Kiev is interested in resolving the Donbass crisis as soon as possible.

At the same time, former Ukrainian Foreign Minister Leonid Kozhara told Kommersant that "it is not about making real attempts to peacefully re-integrate Donbass, but just imitating them."

Meanwhile, the authorities of the self-proclaimed Donbass republics have already rejected the reported plan on Donbass re-integration.

In an interview with RT, DPR’s envoy to the Minsk talks Denis Pushilin said that the implementation of such measures would require bilateral confidence between Kiev and the self-proclaimed republic, but currently there is none.

"After three years of war, no one will believe what Kiev is saying. This is why this option is out of consideration," Pushilin said.

He added that Kiev’s plan contradicts the Minsk agreements which are the only possible measure to resolve the conflict in Donbass.

© Sputnik / Valeriy Melnikov
No Need to Go Beyond Minsk Agreements in Resolving Donbass Conflict - Karasin
In an interview with Radio Sputnik, political analyst Alexander Asafov said that the reported plan is nothing new and aimed at improving Poroshenko’s image ahead of his visit to the US.

"Such an initiative was proposed long ago. Now, it’s been placed in the spotlight ahead of Poroshenko’s visit to the US. There is no final version of that document. It is only in discussion, but no one has seen it. This rhetoric is aimed at portraying Poroshenko as a politician who wants to resolve the conflict peacefully," Asafov said.

He suggested that if approved the plan will "untie Kiev’s hands" and Kiev will use benefits and concessions for Donbass residents for its own interests.
Moreover, the analyst noted that the initiative is also sending a political message.

"In fact, the plan doesn’t contain any real measures to improve the situation in Donbass. This is imitation. Moreover, there is also a political context. First, Poroshenko wants to be considered as a politician who takes care about people. Second, ahead of the Ukrainian presidential election, he wants to impose a martial law to prevent a large number of disloyal electorate from voting," Asafov said.