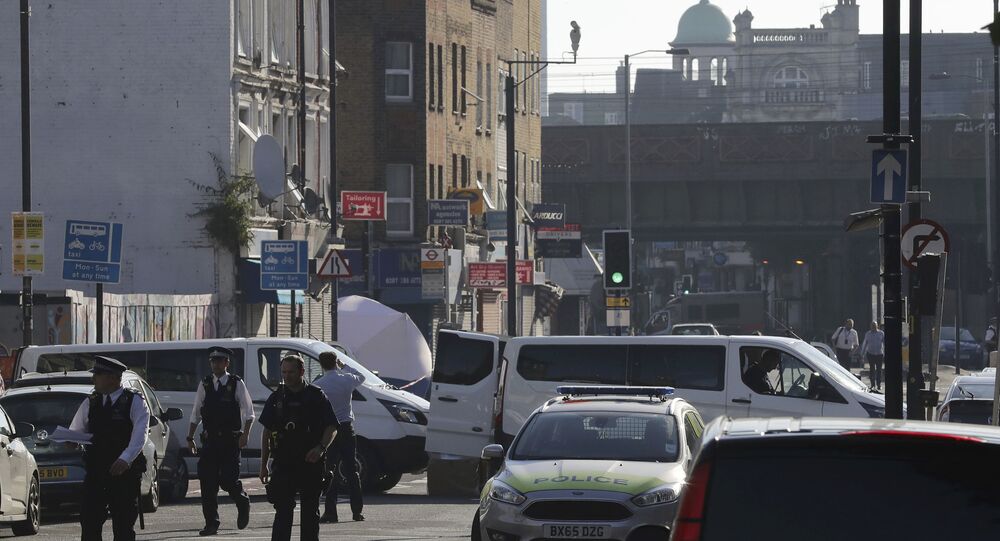 The attack in London’s Finsbury Park is of terrorist nature, UK Prime Minister Theresa May said Monday, condemning it.

© AFP 2020 / Tolga AKMEN
Boris Johnson After Finsbury Incident: 'We Will Never Allow Hate to Divide Us'
MOSCOW (Sputnik) – Earlier in the day, the Metropolitan Police said they were called due to reports of a van collision involving pedestrians near a mosque in Seven Sisters Road, located near the Finsbury Park station. At least one person was killed and 10 more were injured, with eight of them hospitalized in the ramming incident.

"This morning woke to news of another terrorist attack on the streets of our capital city, the second this month and every bit as sickening as those which have come before. It was an attack that once again targeted the ordinary and the innocent going about their daily lives, this time, British Muslims as they left a mosque having broken their fast and prayed together at this sacred time of year. Today, we come together as we have done before to condemn this act and to state once again that hatred and evil of this kind will never succeed," May told reporters.

The Metropolitan Police believe that the perpetrator of the attack near London’s Finsbury Park mosque was acting alone, May added.

"The early assessment is that the attacker acted alone," May said in a statement.

Moreover, extra UK police resources have been deployed to reassure communities following an attack near Finsbury Park mosque and police will assess security needs in mosques.

"Extra police resources have already been deployed to reassure communities and police will continue to assess security needs of mosques and provide any additional resources needed, especially during this final week before Eid al-Fitr, a particularly important time for the Muslim community," May told reporters in a statement.

According to the prime minister, The United Kingdom will review its counterterrorism strategy and establish a commission to counter extremism, including Islamophobia.

"As I said here two weeks ago, there has been far too much tolerance of extremism in our country for many years, and that means extremism of any kind, including Islamophobia … It is why we will be reviewing our counterterrorism strategy and ensuring that police and security services have the powers they need. And it is why we will establish a new commission to counter extremism as a statutory body to hate fight hatred and extremism in the same way we fought racism," May said in a statement to journalists.