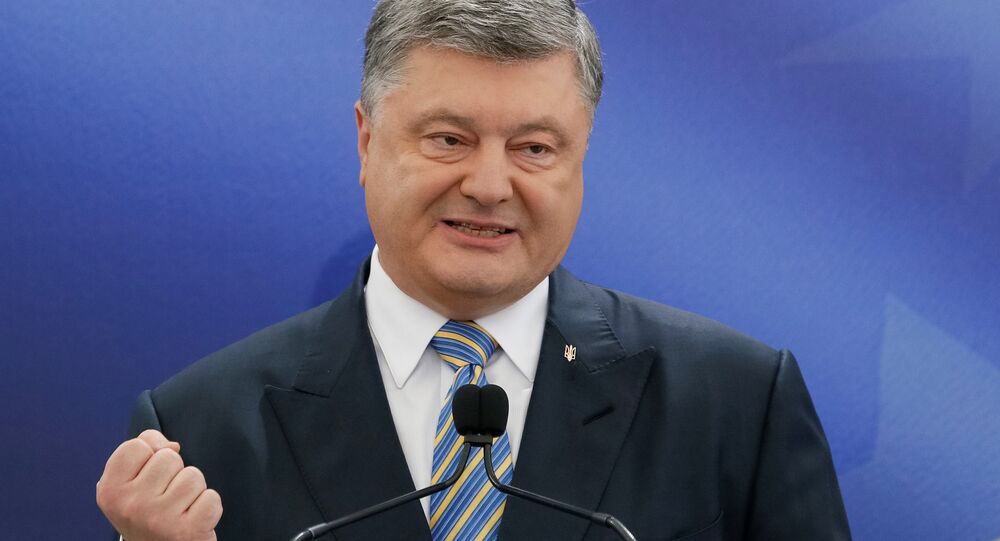 Next week Ukrainian President Petro Poroshenko will be meeting with his US counterpart Donald Trump, and the Ukrainian parliament will be discussing a bill on wrapping up Kiev’s “antiterrorist operation” in Donbass and moving to a new phase of the armed conflict there.

On June 14, Ukrainian MP Andriy Teteruk warned that Kiev planned to ramp up its military operation in Donbass.

Almost simultaneously, US Secretary of State Rex Tillerson said that Washington no longer wanted to be “handcuffed” to the Minsk accords and that there could be other ways to settle the conflict, Alexander Khrolenko wrote for RIA Novosti.

© Sputnik / John Trast
Ukraine Drafting Legislation to Restore State Sovereignty Over Donbass
Meanwhile, President Poroshenko called to fully adapt Ukraine’s military medicine to NATO standards, and the head of the National Security and Defense Council, Oleksandr Turchynov underscored the need to authorize the head of state to use the full scope of the country’s armed forces and other units against the “hybrid aggression by Russia.”

Meanwhile, the United Nations has voiced concern about a possible military escalation in Donbass.

Heading to Washington for instructions

Ukraine’s Foreign Minister Pavlo Klymkin said that during their upcoming meeting Presidents Poroshenko and Trump will discuss ways to bring pressure to bear on Russia to implement the Minsk accords and grant international access to “occupied Crimea.”

Klymkin earlier hinted that he could have added some military aspects to his discussions with President Trump of economic sanctions against Russia.

If true, this is at odds with Washington’s decision to slash US financial assistance to Kiev.

Washington originally planned to line up over $570 million but ultimately scaled the sum down to just $177 million and Rex Tillerson said that Kiev and Moscow have a chance to settle the crisis outside the framework of the Minsk accords.

Alarmed by Washington’s conciliatory tone, Petro Poroshenko rushed to say that ending Kiev’s “antiterrorist operation” in Donbass without allowing its military to adequately respond to “an aggression” would leave Ukraine “defenseless.”

He also said that he had instructed his government to work out a draft law on bringing Donbass back under Kiev’s control.

Parubiy from the Pentagon

Adding credence to rumors about Ukrainian officials engaged in closed-door talks about possible supplies of US lethal weapons to Kiev, Ukrainian parliamentary speaker Andriy Parubiy said in a televised interview that the issue remained on the table and that possible deliveries of US lethal weapons to Kiev “have a technical and symbolic significance for closer cooperation between Ukraine and the United States.”

On Friday, Zoryan Shkiryak, an advisor to Ukrainian Interior Minister Arsen Avakov, said that Kiev was all set to “liberate” the parts of Donbass not yet under its control.

© AP Photo / Evgeniy Maloletka
Kiev Builds Up Military Contingent in Donbass - Russian Envoy
In April, Avakov said that the Ukrainian armed forces should be ready to “win back” Donbass, and in May Kiev ordered a number of T-80 tanks into the conflict zone.

A road to peace

Russia, meanwhile, insists that peace in Donbass is impossible without the participation of the self-proclaimed Donetsk and Lugansk People’s Republics, and that the sides should stick to the provisions of the Minsk 2 accords.

Moscow also believes that it is up to Kiev and no one else to end the conflict and many reasonable people in the West fully share this opinion.

The situation in Donbass has escalated over the past few days, in particular near the town of Avdiivka in the Donetsk region, where clashes between

Kiev forces and the troops of the Donetsk People’s Republic have intensified. The conflicting parties have both accused each other of initiating the violence.

The Donbass conflict erupted in April 2014 as a local counter-reaction to the West-sponsored Maidan coup in Kiev that had toppled legitimate President Viktor Yanukovych in February.

© Sputnik / Gennady Dubovoy
Eight Donetsk Republic Soldiers Killed in Donbass Over Past Week
In February 2015, Kiev forces and Donbass independence supporters signed a peace agreement in the Belarusian capital of Minsk. The deal stipulates a full ceasefire, weapons withdrawal from the line of contact in Donbass, as well as constitutional reforms that would give a special status to the Donetsk and Lugansk People’s Republics.