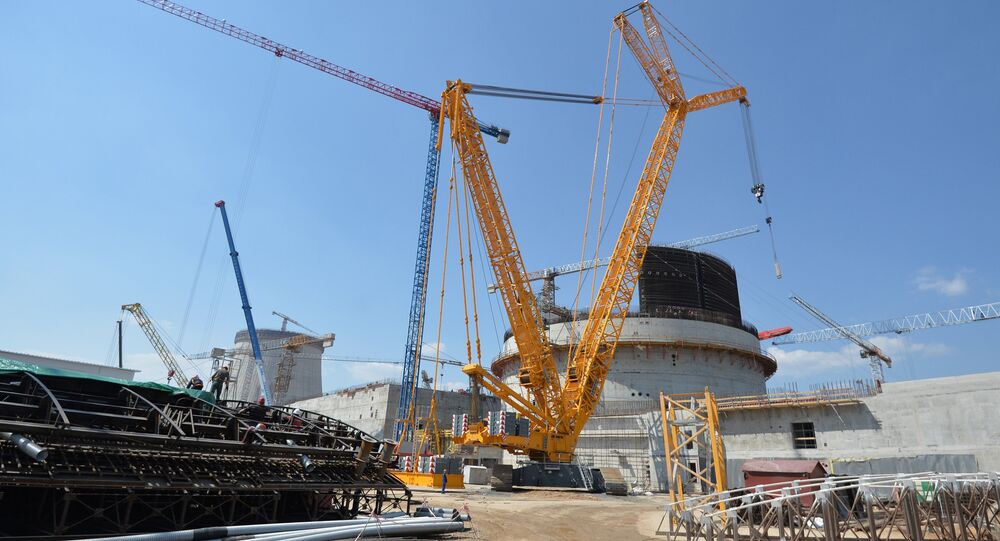 © Sputnik / Viktor Tolochko
Minsk to Report to EC After Stress Tests at Belarusian NPP – Energy Ministry
MINSK (Sputnik) —Lithuanian Environment Minister Kestutis Navickas demanded Belarus Friday to stop its construction of the Belarusian nuclear power plant (NPP) and start the project anew over claims that the criteria for choosing the area for the plant to be built were neither clear nor transparent.

From the very beginning, Lithuanian authorities have opposed the construction of the NPP, which is located just 50 kilometers (31 miles) east of the country's capital of Vilnius. Belarus has, however, insisted that the facility complied with the highest safety standards.

"[They] should start over the project," the minister told the tut.by news portal when answering a question about measures the Belarusian side should take to resolve Lithuania's concerns.

The official explained that the criteria for choosing the Astravyets District of Belarus' northwestern Grodno region were unclear, adding that not only Lithuania, but also the European Union and Implementation Committee of Espoo Convention were not satisfied with the project. Navickas added that Lithuania wanted to make this project economically unattractive.

On June 2, Belarusian Foreign Minister Vladimir Makei told Sputnik that Lithuania's actions were motivated by economic reasons rather than security-related ones. The foreign minister argued that after the construction project for the Lithuanian Visaginas NPP was prevented due to its economic situation, Belarus turned into Lithuania's competitor in terms of producing power.

On Thursday, Lithuanian parliament declared that the Belarusian NPP posed a threat to national security as the project is not transparent and the security requirements and ecological standards are not met. The same announcement was made by the Lithuanian government on June 7.

The station is being built with help from Russia, and its first unit is due to start operating in late 2019. The NPP will be comprised of two power units, which will have a total energy capacity of up to 2,400 MW. The NPP will produce electricity mainly for export to European countries.