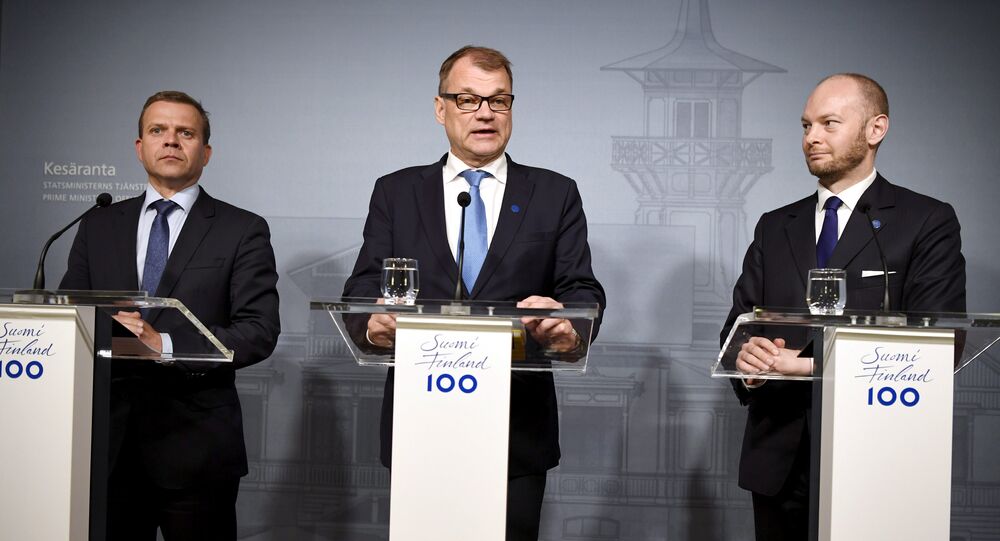 In recent days, the Finnish government has been teetering on the edge of disaster following the change of leadership in the Finns Party, which made further cooperation within the ruling coalition impossible. However, a surprising last-minute split in the far-right party rescued the incumbent government from imminent dissolution.

© REUTERS / LEHTIKUVA/Jussi Nukari
Stalwart Finns Phalanx Sinks Government Coalition Over Immigration Issues
Instead of the government's termination, it was the Finns Party's parliamentary group that collapsed, after a gang of 20-odd MPs eager to cling to their government posts broke away from their parent party and formed a new group which is calling itself New Alternative, Finnish national broadcaster Yle reported.

Contrary to the Finns' party's firm belief that further cooperation was impossible, the dissenters swore allegiance to the Sipilä government and pledged to be ready to continue under the same program, whereupon they were allowed to keep their posts by Prime Minister Juha Sipilä.

According to New Alternative leader Simon Elo, the move was not only a reaction to anti-immigration hardliner Jussi Halla-aho's rise to power, but a response to general changes the party has undergone. Elo also remarked that the decision to break off from the Finns party had been "surprisingly easy." Former Finns chair Timo Soini joined New Alternative as a rank-and-file member and lamented that the Finns Party was no longer the same, despite previously saying that defecting to another party was unthinkable.

© REUTERS / Markku Ulander/Lehtikuva
Deceased Finnish President Supported USSR's Demise 'in the Name of Culture'
"Hero of the day" Halla-aho admitted that he had envisaged a few MPs leaving, but had not expected such a massive exodus, stressing that the departees hadn't informed of their plans in advance. According to Halla-aho, the departure from the parliamentary group is tantamount to breaking away from the party as such.

"If this is their idea of respecting the outcome of a democratic election, then I beg to differ," Jussi Halla-aho concluded drily.

In addition to essentially stopping the Finns' ambition to become the country's leading opposition force, New Alternative rejuvenated the ruling coalition between the Center Party and the National Coalition Party, while effectively dashing the hopes of the Swedish People's Party and the Christian Democrats of entering the government.

© CC0
Finns Fume Over Abduction, Forced Marriage, Gender Mutilation of Migrants
The Finns' newly-elected leader Jussi Halla-aho has previously given rise to many a controversy. A staunch opponent of unbridled immigration and a fervent critic of Islam, Halla-aho was previously convicted of hate speech for disparaging comments about Muslims and Somalis. Recently, he hailed Hungary's practice of keeping refugees in closed camps as a model example for Europe.

The election of hardline Euro-skeptic and openly anti-immigration Halla-aho is largely seen as an ideological comeback for the right-wing Finns Party, which has been losing momentum after a brief flash of popularity. With the party's perennial leader Timo Soini resigning amid mounting accusations of populism from the most uncompromising Finns voters, Halla-aho, who openly pledged to lead Finland out of EU and the Eurozone, was seen as a back-to-the-roots maneuver. However, the recent schism makes Finland's formerly second-largest party's perspectives all the vaguer.

Can We Fixit? Finns Party Hopes to Lure Fleeing Voters With Eurozone Withdrawal