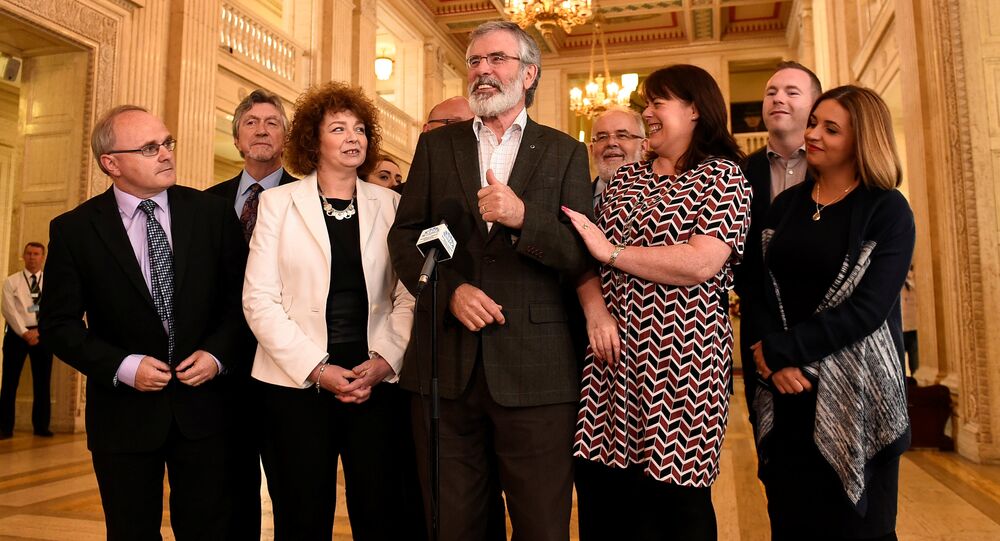 Talks to broker a deal to form an executive government in Northern Ireland - which has been in paralysis since January - have begun again, June 12, amid a growing row over UK Prime Minister Theresa May's impending deal with unionists to gain power in the London parliament.

The Northern Ireland Executive is the devolved government in the province, which was set up under the Northern Ireland peace process. It has to be made up by a coalition of political parties — the two largest of which are the nationalist Sinn Fein and the Democratic Unionist Party (DUP), the former wanting reunification with Ireland and the latter wanting Northern Ireland to remain part of the United Kingdom.

The party winning most seats nominates the Fist Minister and the second nominates the deputy First Minister. Following the 2016 election, the DUP gained most and put in its leader Arlene Foster as FM and Sinn Fein nominated Martin McGuinness as deputy.

It has run successfully — if under some strain because of historical tensions between the two parties — until the resignation of McGuinness, January 9, 2017, over a row between the two parties over a botched green energy scheme originally overseen by Foster, which was supposed to incentivize people to switch to renewable, but which ended in farce when the scheme paid out more than the cost of the fuel, leaving taxpayers with a bill of up to US$486 million.

Once McGuinness resigned, Foster was forced out of office and the Executive collapsed, leading to an election, March 2, in which the DUP lost its long term majority. Neither party could agree on forming a new Executive and a deadline for agreement to be reached passed, which legally meant another election had to be called or 'direct rule' be imposed from London.

Direct rule is not favored by the British government, as it would resurrect old hostilities and threaten to tear apart the delicately held Northern Ireland peace agreement.

However, the result of the UK general election, June 8, has thrown everything into chaos, as UK Prime Minister May is seeking to support in Westminster of the 10 DUP members in that parliament. As London and Dublin are seeking to act as honest brokers in trying to break the impasse over the Northern Ireland executive, May's intervention with the DUP has thrown the whole process into political turmoil.

Watch the PM's statement outside No10 when she announced she would be forming a government following the general election. pic.twitter.com/hX9bjniMQq

​Talks resume, June 12, with little hope of a successful outcome, with Ireland's prime minister-elect Leo Varadkar, saying he is set to warn May over the importance of impartiality in power-sharing talks.

​"Our role as guarantors, here in Dublin and London, is to act as co-guarantors and not to be close to any particular party in the north, whether it's nationalist and republican or unionist. That's certainly something I'd emphasise in any contacts that I have with Prime Minister May," he said.