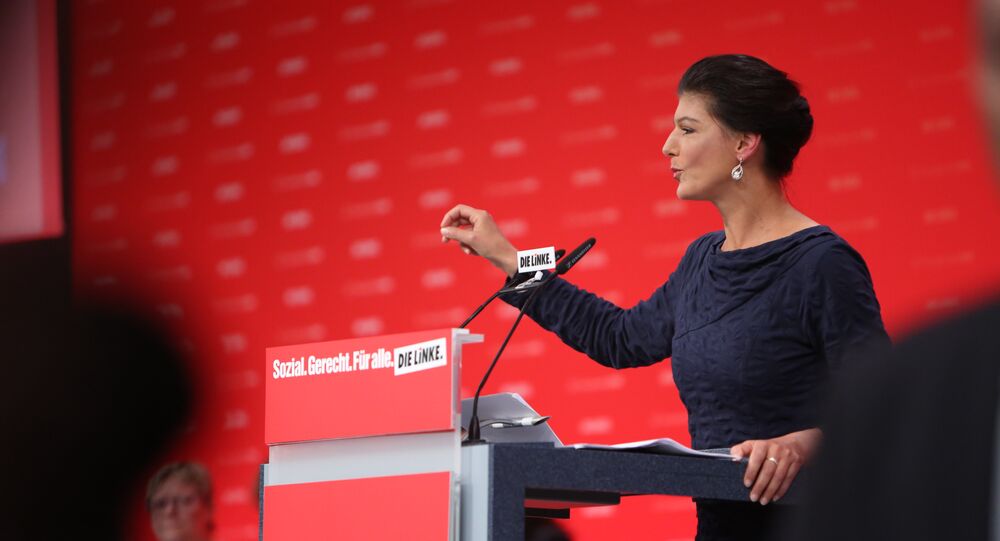 Germany's Die Linke party, which held its party conference in Hannover last weekend, is seeking to pursue a policy of "good neighborliness" and improve relations with Russia, the party's leader in the Bundestag Sahra Wagenknecht told Sputnik.

© Flickr / thierry ehrmann
Germany Arrests Suspected 'Daesh Correspondent' of Syrian Origin
The leftist Die Linke is the third-largest party in the German Bundestag, with 64 seats. On Friday, the party began its three-day conference in Hannover, where party members debated its manifesto ahead of federal elections to be held on September 24.

On the sidelines of the conference, Sahra Wagenknecht, co-leader of Die Linke in the Bundestag, told Sputnik Deutschland that one of the party's foreign policy ambitions is to improve relations with Russia.

"We want to improve the relationship with Russia, we want a new approach in the tradition of détente politics, a policy of good neighborliness. This means taking mutual interests seriously and mutually accepting legitimate interests. Europe and Russia have a history that can't be erased, and Russia has always been the victim of raids and wars, not least, and worst of all, by Germany in the Second World War," Wagenknecht said.

"That is why I can well understand that many people feel threatened when they see German soldiers on the Russian border again. We do not want that, we want peace in Europe and peace is only possible with Russia and not against Russia."

Wagenknecht said her party rejects the unsubstantiated allegations made in the US that Russia influenced the result of last year's presidential election, to the detriment of Democratic candidate Hillary Clinton.

Rather, Clinton's failure to be elected President was a result of her shortcomings as a candidate from the establishment, at a time when voters are keen for something different.

"This debate is going on in all seriousness and it is really curious. I really have to say: Whoever ascribes to Russia the power to essentially decide who will lead the American nation and who will become President, is completely crazy."

"Of course, there is no substance [to the allegations]. I think there has to be a serious discussion about why someone like Donald Trump was able to be elected. That is also where we are regarding social issues and social problems, there is an absence of perspective. Above all, the election in the USA was an anti-election. The people there did not want any 'more of the same,' they did not want Hillary Clinton. This is the truth and everything else is really ridiculous," Wagenknecht said.

© REUTERS / Hannibal Hanschke
Blame Game: German Left Party Attacks SPD for Election Shambles in Saarland
In her speech to the party conference, Wagenknecht called on the German left to provide an alternative to establishment politics and emulate the recent success of the UK's Labour Party, which succeeded in last week's general election with a socialist agenda.

Against expectations, Labour Party leader Jeremy Corbyn increased his party's share of the vote by 9.6 per cent and gained an extra 30 seats in parliament.

"Die Linke would immediately elect a German Jeremy Corbyn as Chancellor; It is not, unfortunately, in our power to make Martin Schulz into a Jeremy Corbyn," Wagenknecht told the conference.

In conversation with Sputnik, the party co-chair said that Corbyn had won by taking "classical Social-Democratic positions" such as renationalization of privatized public services and utilities as well as investment in education and healthcare.

"He was vilified as somebody who wants to return to the past. This is a reproach which we hear in Germany again and again: If someone wants to restore the welfare state, then one is supposedly backward. But Corbyn was not bothered at all by all the insults and defamations. He was treated very badly, also by the media, but he pulled through, he said clearly, 'this is what I want.' He also had credibility, which is probably the most decisive. It is not just about the promises which are made to voters but also about whether or not to believe him."

© REUTERS / Francois Lenoir
Merkel Flying High as 'Schulz Effect' Fails to Deliver for Ex-EU Chief
"Martin Schulz doesn't have any of that. He doesn't have any credibility or [political] demands. Everything is to force a continuation of the grand coalition. So, you don't win elections, but one is also out of the game when it comes to making a new coalition with left-wing participation. This is absurd, because we don't want to continue the recent policy," Wagenknecht said.

The politician said that her party would consider entering into coalition only if it could find a suitable partner.

"Sure, we want to govern if we have an absolute majority. If we have partners with the same goals, we want to govern. But we do not want to go into a government in which, in the end, we have to do the opposite of what we have promised the voters. There are enough of those kinds of parties, which have no credibility, which can't be trusted by their voters.  We won't be like that," Wagenknecht declared.