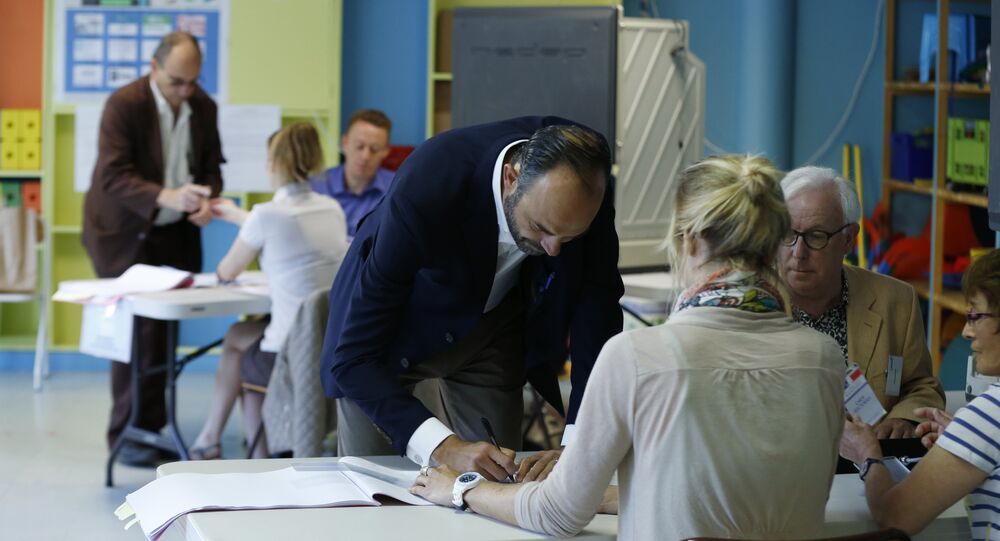 Voter Turnout in 1st Round of French Legislative Vote Reaches 19.24%

French Interior Ministry announced that the voter turnout in the first round of the French legislative elections reached almost 20% at 10:00 GMT.

© REUTERS / Stephane Mahe
French Presidential Nominee Melenchon Votes in First Round of Elections
PARIS (Sputnik) — Voter turnout in the first round of the French legislative elections stood at 19.24 percent at 12:00 p.m. local time (10:00 GMT), slightly lower than during the legislative elections in 2012, the Interior Ministry said on Sunday.

The highest level of voter turnout could be seen in central and southern parts of France, with 37.86 percent voting by noon in the Creuse department, 29.46 percent — in Gers and 28.88 percent in the Correze department. The lowest turnout has been registered in the country's capital region with 10.50 percent in the Seine-Saint-Denis department, 11.68 percent in Paris and 13.33 percent in Yvelines.

© AFP 2020 / Jacques DEMARTHON
Over 40% of French Undecided on Candidate to Vote for During 1st Round of Elections - Poll
The voter turnout at the same time during the first round of presidential elections on April 23 stood at 28.54 percent.

Friday's Ipsos/Sopra Steria poll showed that the alliance of Macron's La Republique En Marche party (LREM) and The Democratic Movement (MoDem) could get between 397 and 427 out of 577 parliamentary seats. The main opposition in the face of The Republicans party and its allies can get 95-115 seats. The National Front party can receive from five to 15 seats in the parliament.