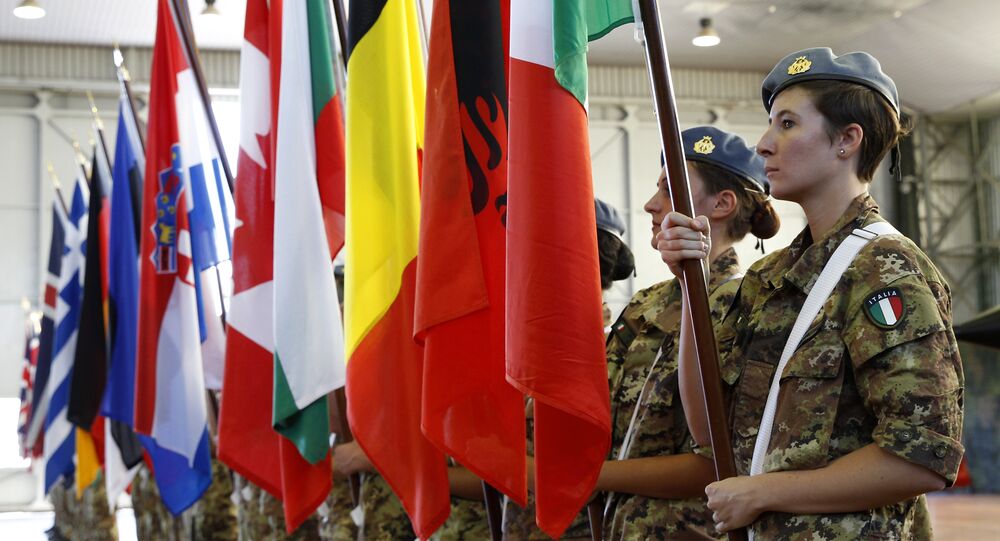 This year Italy will once again ramp up its military outlays to meet NATO’s requirement agreed upon in 2006 that members spend at least two percent of their GDP on defense.

In an interview with Sputnik, Enrico Piovesana, a defense expert and the co-founder of the Observatory of Italian Defense Spending (Osservatorio Delle Spese Militari Italiane), said that the 2006 requirement is not legally binding and will hardly be met any time soon as the majority of European members of the alliance fall short of the 2 percent mark.

“Italy is spending 1.4 percent, Germany — 1.2 percent and Spain, Holland and Canada — 1 percent each. The US demand [that its NATO partners spend more on defense] is counterproductive. Greek contributions exceed 2 percent, but we are well aware of the sorry state the country’s economy is now in. Italy, for example, is spending almost 12 billion euros (60 percent of its defense budget) on its bloated military personnel. We have more officers than we have ordinary soldiers,” Enrico Piovesana told Sputnik Italy.

© AP Photo / Virginia Mayo
Secret Italian-American Pact Still Dictates Italy's Role in NATO After 60 Years
He added that Italy was spending 28 percent of its defense budget to buy military hardware, which is more than any other EU country (20 percent), and even the US (25 percent) do.

“We are buying too much arms, including F-35 fighters. We have already spent 5.4 billion euros on new warships and are now shelling out 5 billion to buy 800 new tanks,” Piovesana said.

He added that it was being done to make foreign arms manufacturers, like Lockheed Martin and BAE Systems, happy.  “Spending billions on tanks and planes that are so easy to hack into is just ridiculous! It’s like buying a posh villa and saving on a good door. From a strategic standpoint this is absurd,” he fumed.

“Unfortunately, Italy always goes where NATO tells it. There is no political force were able to stand up to Brussels. The problem is not Italy, whose government wants to ease the anti-Russian sanctions. The problem is NATO, which is aggressively moving towards the Russian borders,” Enrico Piovesana stated.

He also said that while Italy advocates closer trade and other economic ties with Russia, it is still sending its troops to the Baltics to “contain Russia,” just as NATO says it should.

All recent opinion polls show that the majority of Italians want the country to spend less on defense.

© AFP 2021 / MAHMUD TURKIA
NATO's Bidding Puts Italy on a Collision Course With Russia
“Then everyone starts talking about security and the terrorist threat. As a result, many people fail to understand that spending more on arms, overseas military operations and wars only encourages the terrorists,” Enrico Piovesana concluded.

"I'm a big fan of NATO, but they have to pay up," Trump said during a presidential debate in October, 2016.

Just five members of the alliance – Estonia, Greece, Poland, the UK and US – currently meet the stipulation.