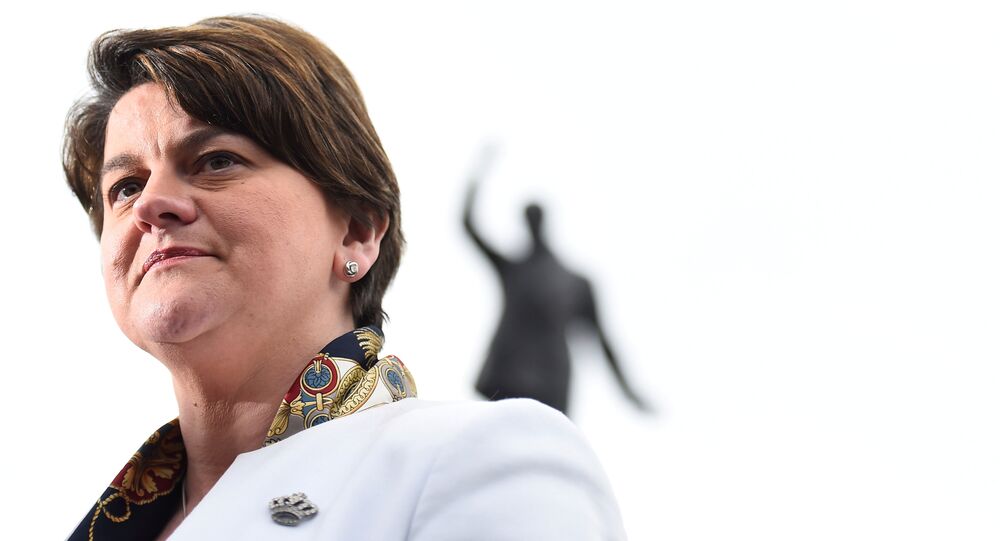 The Kingmakers: Democrat Unionists Have Given Tories Keys to Power

Theresa May has fallen short of the 326 seats required for a majority in Parliament, but she has agreed a deal with the Democrat Unionist Party (DUP) which will allow her to continue in power.

The DUP have 10 MPs, having won two more seats in Northern Ireland.

If you're still frantically searching for the DUP- here's what we can tell you about their policies: pic.twitter.com/IDvLpKdhsw

​On Friday, June 9, their leader, Arlene Foster, agreed to support the Conservatives without a formal coalition deal.

Theresa May said the Conservatives and the DUP would work together to "provide certainty" and keep the country "safe and secure".

She said the Tories and the DUP had "enjoyed a strong relationship over many years".

But who are they and what would they want as their price for keeping May in power?

The Democrat Unionist Party was formed in 1971 by rabble rouser Ian Paisley senior, who died in 2014. For decades politics in Northern Ireland had been dominated by the Ulster Unionist Party (UUP), a traditional, conservative force which represented the Protestant majority and had a close relationship with the Conservative Party.

The Tories never fielded candidates in Northern Ireland and the UUP were seen as their sister party, just as the Catholic SDLP was close to Britain's Labour Party.

Professor Adrian Guelke, from Queens University in Belfast, said: "Once upon a time the UUP were part of what was the Conservative and Unionist Party and they were tied together until the Sunningdale Agreement in 1973."

The UUP leader David Trimble and his SDLP counterpart John Hume jointly won the Nobel Peace Prize in 1998 for their role in supporting the Good Friday Agreement, which brought to an end "The Troubles."

But the UUP found its support slipping among the Protestant community as the DUP offered a more hardline approach to Sinn Fein.

"The DUP outflanked the UUP by taking a very hardline stance. Trimble signed the Good Friday Agreement and the DUP originally opposed it and attacked Trimble as a 'traitor' who made concessions to the IRA and failing to bring about the decommissioning of IRA weapons," he told Sputnik.

Despite his violent rhetoric against what he frequently referred to as "Sinn Fein/IRA" Paisley senior underwent a remarkable conversion. He formed a working relationship with Sinn Fein's Martin McGuinness — who died in March — and they were able to work together with Paisley as First Minister and McGuinness as Deputy First Minister.

They were often seen laughing and joking together and were even dubbed "the chuckle brothers" by journalists.

Paisley stepped down in 2008 due to his age and faltering health and handed over to Peter Robinson, whose image was tarnished by a bizarre scandal involving his wife Iris, who obtained £50,000 (US$64,000) from two property developers and lent it to her young lover to start a business.

In January 2016, Arlene Foster replaced Robinson as DUP leader but her relationship with McGuinness was never warm and it ran into trouble when it became clear that a Renewable Heat Incentive scheme, which was her idea, had cost the taxpayers of Northern Ireland £490 million (US$623 million).

Here is the DUP's #GE2017 manifesto on Brexit pic.twitter.com/g6QVgRKs0a

​Sinn Fein forced fresh elections but the DUP continued to prosper and refused to oust Foster as leader. Now she is effectively the "kingmaker" with reports that Theresa May is to go to Buckingham Palace on Friday to ask the Queen if she can form a government, propped up by the DUP. But it would be naive to think the DUP will not make demands on May.

Their manifesto includes support for a third runway at Heathrow — which would allow people in Northern Ireland to transfer to international flights more easily — and makes it clear they want the winter fuel allowance and the triple lock for pensioners to be protected from cuts.

​Although they are firmly in favor of Brexit, the DUP has also made it clear they do not support the introduction of a "hard border" between Northern Ireland and the Irish Republic.

Foster said on Friday (June 9) she would be having further talks with May to "explore how it may be possible to bring stability to this nation at this time of great challenge."

"There was talk of hung parliaments in 2015 and the DUP have been looking forward to holding the balance of power," Professor Guelke said.

Tories attacked Corbyn for links to Sinn Fein now they want to form coalition with the sectarian and bigoted DUP.

​But he said if the British prime minister is relying on the DUP to prop up her government, it potentially causes a problem for the peace process in Northern Ireland.

The British and Irish governments are supposed to act as "external conflict managers," but if the DUP are part of the government in Westminster then London will automatically be seen as "biased" by Sinn Fein, Professor Guelke told Sputnik.

Ironically, on Monday (June 11) the DUP and Sinn Fein are supposed to begin negotiations on forming a new Northern Ireland Executive.

"Sinn Fein are demanding Arlene Foster step aside in order to make progress but the DUP won't do anything at the behest of Sinn Fein. I suspect they now they have Sinn Fein over a barrel because they will have the support of London now," Professor Guelke said.