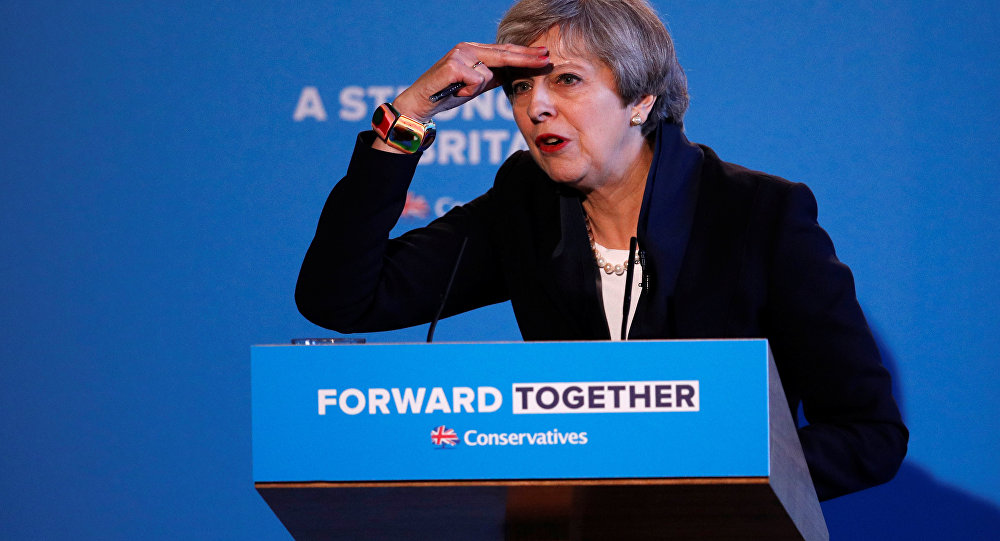 As the last votes are counted in the UK general election, UK Prime Minister Theresa May is looking to have made the wrong call in holding a snap election in an effort to give herself a personal mandate to go into the Brexit negotiations with Brussels with a greater majority in parliament, which she has failed to deliver.

In a night of great drama, which saw Labour leader Jeremy Corbyn keep his seat with an increased majority and the defeat of former Liberal Democrat leader Nick Clegg, Theresa May held her seat with a slight drop, as she saw her overall majority in parliament fall, despite hoping for a landslide victory.

© REUTERS / Steve Parsons
Theresa May, Theresa Might, Theresa Won't: UK PM Looks to Lose Sure Bet
May called the election after inheriting a working majority of just 17 when former Conservative Prime Minister David Cameron resigned after the referendum, June 23, 2016, which resulted in Britain voting to leave the European Union.

She wanted to gain a personal mandate to go into the Brexit negotiations with Brussels, with a larger majority in the House of Commons, so that she could strike a deal with the EU which — as she said in her speech after triggering Article 50 of the Treaty of Lisbon — would give her "a mandate to lead Britain".

​As the night of counting unfolded, June 9, it became clear that May's bid for a larger majority was looking shaky. Having refused to go head-to-head with other political leaders in TV debates, she looked increasingly isolated.

© REUTERS / Francois Lenoir
UK's Conservatives to 'Backstab,' Replace May if Election Loss Confirmed
She originally ruled out a snap election, but changed her mind — a fact that began to sow the seeds in people's minds that she was not the "strong and stable" leader she portrayed herself a being at the start of the campaign.

Now, she finds herself still Prime Minister — at the moment — with no overall majority and facing the prospect of having to form a minority government and going into the Brexit negotiations with nothing like the ringing endorsement she wanted, which does not bode well for her chances with Brussels.

Moreover, with the final result yet to be declared, commentators are talking of another election in the autumn, which will throw the whole Brexit process into disarray, which will mena bad news for London, as well as bad news from the EU.