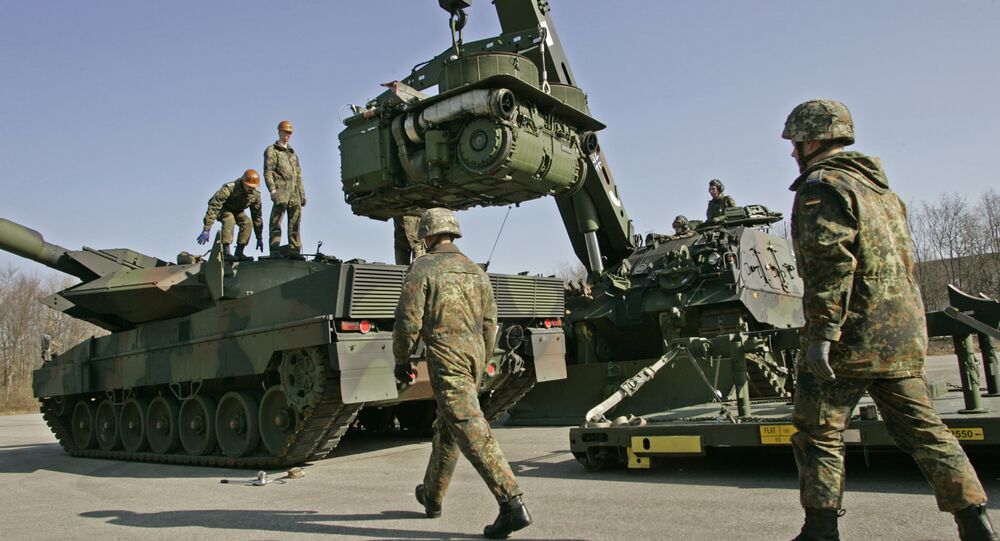 The EU has unveiled an unprecedented plan for common defense spending to help Europe stand alone as a global military power. Sputnik Radio discussed the issue with Federico Petroni, Contributing Editor at Limes Magazine and Co-founder of the iMerica website, who explained why the US and UK won't favor the idea.

© Sputnik / Anna Volkova
Europe Needs Joint Defense Strategy to Confront Terrorism - EU Lawmaker
"The proposal by Brussels for a 5.5-billion-euro a year fund follows a Franco-German led bid to focus on security and defense to provide a new sense of purpose after the Brexit vote last year shook Europe," AFP reported on Wednesday.

"It's not about substituting neither the alliance nor the United States, but it's a matter of focusing on what we can do more for our own purposes, our own interests," she said.

The new EU fund will consist of two parts: the first will help member states finance defense research into fields such as electronics, encrypted software, robotics and drones.

A draft unveiled at the end of 2016 envisaged a research program with an annual budget of around 500 million euros after 2020.

The fund's second portion will pool resources for big-ticket hardware purchases such as tanks, helicopters and drones.

© AFP 2020 / FREDERICK FLORIN
Europe Has 'Neither Desire Nor Money for Its Defense Schengen'
This part would reach a budget of five billion euros a year once fully operational, with the commission arguing that member states waste 25 to 100 billion EU-wide when going alone.

There is a big question remaining over how the EU budget will pay for the new defense plans. The bloc will soon face an estimated 10-billion euro hole with the exit of net contributor Britain.

European nations also need to meet Trump's demand that all NATO nations meet their commitment of spending 2 percent of GDP on defense.
But France and Germany, the EU's powerhouses, have asked the commission to seize on Brexit as an opportunity for further defense cooperation given that Britain has always opposed closer EU defense ties.

EU leaders are also expected to discuss defense issues at a summit in late June. Although the funding plans will only be implemented after Brexit, the British prime minister is entitled to take part in the June discussions.

Sputnik Radio discussed the issue with Federico Petroni, Contributing Editor at Limes Magazine and Co-founder of the iMerica website.

"The common plan on defense spending is one of the first examples of how the German-led two-speed Europe, or multi-speed Europe will look like. Defense and monetary issues are going to be the key pillars on which such a Europe will rely. The drivers of this initiative by the EU are quite clear: Brexit and the reduced British footprint on the European security, Trump's criticism towards NATO and Russia's assertiveness in Eastern Europe," he told Sputnik.

What is not commonly understood, he further said, is that the EU’s ambitions in the defense area rely on Berlin's desire to consolidate an exclusive sphere of influence inside the continent and among like-minded countries. In fact, Germany is trying to project itself as an anchor army of Europe, he said. It is doing so by strengthening ties in the military sphere with the armies of the Netherlands, Romania, the Czech Republic, Lithuania, Norway and other like-minded countries.

Commenting on who will accept and who will reject the project, Federico Petroni suggested that it will resonate well in the countries which have major defense industries, such as Germany, France and Italy. It will also be warmly greeted by Spain and the Netherlands. It will also resonate well in the countries which are normally allied with Berlin, like Finland. These countries are also taking the lead in some important defense positions inside the EU, such as hybrid-warfare structures.

However this initiative won't resonate well in the so-called Anglosphere: principally the US and the UK, he said.

© Flickr / Rock Cohen
European Army: If Trump's Plan for NATO Works Out Who Will Pay for Europe's Defense?
He further explained that it looks like a paradox: on the one hand, Washington demands NATO countries, many of which are part of the EU, spend two percent of their GDP on defense. But the two percent limit will hardly protect Europe. It is rather an effort of the US and the other Anglosphere countries to restrain a hammering Europe and to remind them who the landlords of the continent really are, namely the Anglo-Americans, he said.

"The US will also intervene to avoid any attempt by Germany to consolidate an exclusive sphere of influence inside Europe. In fact, this is what the American geopolitics is all about: avoiding the birth of a regional hegemonic power inside the continent. That is what the World War I and World War II and the Cold War were fought for. And this is what the current tension in Eastern Europe is all about," Federico Petroni concluded.