Speaker of the Serbian unicameral parliament Maja Gojkovic on Monday thanked Russia for not recognizing independence of Kosovo and expressed certainty that Moscow will support Belgrade in the issue of preventing Pristina from joining UNESCO.

BELGRADE (Sputnik) — Speaker of Russian lower chamber of parliament Vyacheslav Volodin arrived in Belgrade for a visit earlier on Monday and met with Gojkovic to take part in a meeting of the cooperation commission between the Duma and the Skupstina.

"We have discussed the potential new claims of Kosovo to join international organizations, such as UNESCO, and what an important issue it is for maintaining the cultural heritage of Serbia and Serbian people, as well as for the world cultural heritage. Of course, we have come to an agreement that Russia, as in the previous voting, will support the Republic of Serbia," Gojkovic said, adding that she has also thanked Russia for its support of territorial integrity and sovereignty of Serbia, as well as for the "consistent and principal" policy of not recognizing independence of Kosovo. 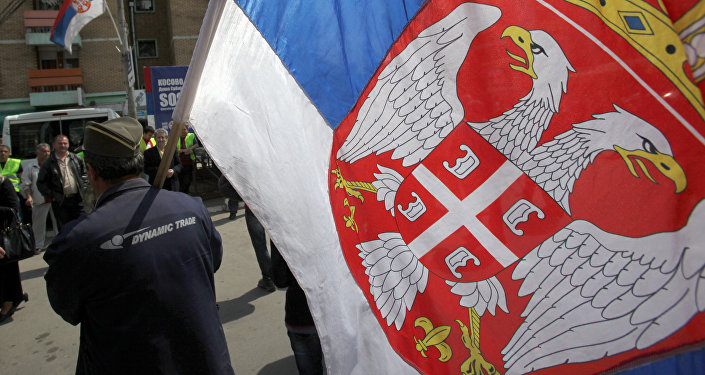 © AP Photo / Darko Vojinovic
Albanians Seek to 'Demonstrate That Serbs Have No Place in Kosovo'
In November 2015, Kosovo’s application to join UNESCO has been rejected during the UNESCO General Conference in Paris. The application was supported by 92 countries, with a necessary minimum of 95, and 50 countries voted against, with 29 countries abstaining. The Russian Foreign Ministry stated that Kosovo could not be considered a state with legal personality and therefore has no right to apply for membership in such international organizations as UNESCO.

An armed conflict broke out between Kosovo Liberation Army of Albanian independence supporters and Yugoslavia, with the militias seeking independence of the region of Kosovo and Metohija. NATO intervened in the conflict in 1999 without an approval from the UN Security Council, carrying out airstrikes against Yugoslavia.

A former Yugoslavian region mainly populated with Albanians, Kosovo unilaterally proclaimed independence from Serbia in 2008 and is recognized by over 100 UN member states. Serbia, alongside Russia, China, Israel, Iran, Spain, Greece and some other countries, does not recognize Kosovo’s independence.