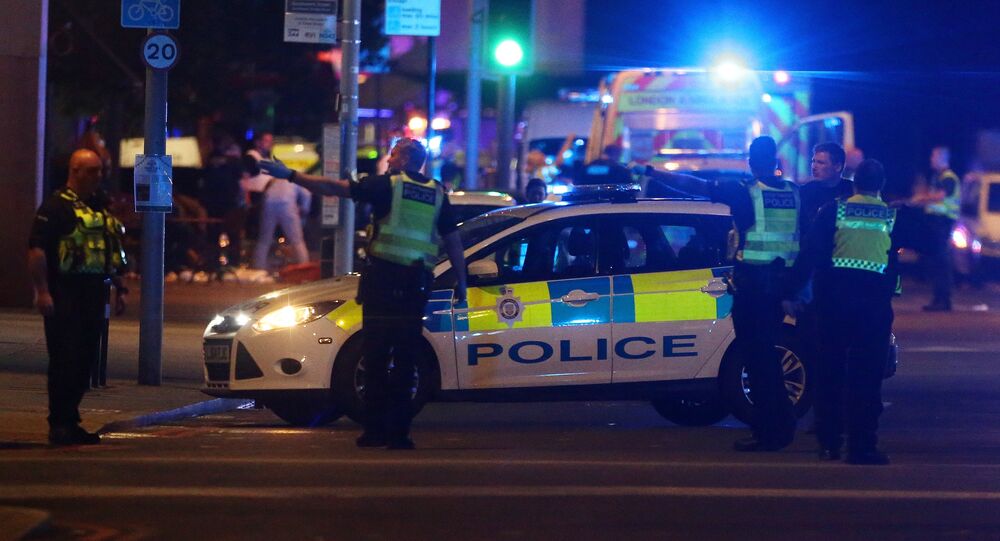 Most election campaigning in Britain has been suspended following the terrorist attacks in London - the second such attack since UK Prime Minister Theresa May called a snap election, due June 8, in an unprecedented move in recent history.

Three terror attacks in three months have hit Britain, with two of them occurring since the snap general election was called, bringing a halt to most national campaigning for the second time — an unprecedented situation in recent political history.

© AP Photo / Owen Humphreys/PA
Manchester Police Chief Says Abedi Known to Police Only for Minor Crimes
Campaigning was first halted following the terror attack at Manchester Arena, when a lone suicide bomber detonated his explosive vest at the end of a concert by Ariana Grande. Twenty-three people died and 116 were injured in the attack, which was carried out by 22 year-old Salman Ramadan Abedi.

All election campaigning was stopped for two days after the attack as politicians condemned terrorist in unity, with no party seeking to make political capital out of the atrocity.

Now, all campaigning has once again been suspended, following the attack on London Bridge and the nearby Borough Market, with just four days to go until voting begins. It is an unprecedented situation which is likely to have an effect on the polling result.

Theresa May called the snap election — which was not due until 2020 — in order to gain a greater mandate to go into the Brexit negotiations with Brussels. She took over as prime minister following the resignation of David Cameron, who failed to win support for Britain to remain within the European Union.

© REUTERS / Peter Nicholls
Former UK PM David Cameron Resigns as MP: 'I Don't Want to Be a Distraction'
However, she was not elected by the whole population and inherited a small working majority of just 17 in the House of Commons. She was able to call the election after winning a two thirds majority to overrule the Fixed Term Parliament Act, because a majority of Labour MPs wanted to hold an election, lose it and then be able to remover their leader Jeremy Corbyn, who does not have the support of most of his own MPs.

However, since the election was called, Theresa May's lead in the opinion polls has slipped for a 24-point lead to single figures, with the latest poll showing Labour with a three percent lead, before turnout is taken into account.

Traditionally, the incumbent prime minister gains in a time of national emergency. Margaret Thatcher benefited from the 'Falklands effect', after Argentina invaded the British Overseas Territory in the South Atlantic in 1982.

With the current opinion polls showing Theresa May's Conservative Party neck-and-neck with Jeremy Corbyn's Labour Party, the threat of terror in the UK is rising to the top of the political agenda.  Although election campaigning will be suspended until June 5 — Theresa May will be sure to show "strong and stable" leadership in the light of the latest terror attack. "Strong and Stable" is the motto of her election campaign.

Putin to May: London Attacks are 'Shocking in Cruelty and Cynicism'