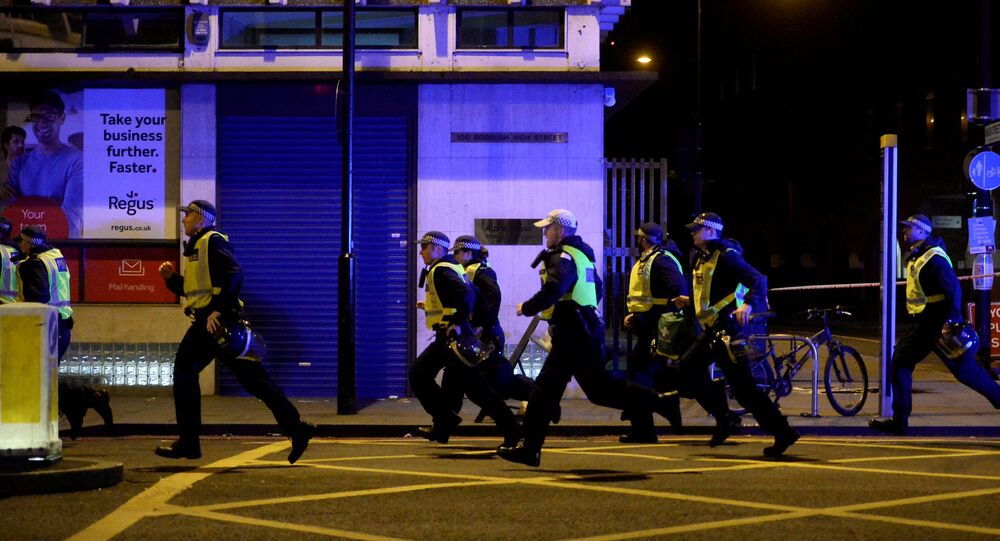 On Saturday, at 10:08 p.m. local time (21:08 GMT), a vehicle struck pedestrians on London Bridge. The vehicle with three suspects continued to drive to the Borough Market, after which the suspects left the vehicle and carried out a stabbing attack at the market. The attackers were confronted by the police and shot dead within minutes.

LONDON (Sputnik) — According to the local authorities, at least six people were killed and 48 more injured.

"Following updates from police and security officials, I can confirm that the terrible incident in London is being treated as a potential act of terrorism," UK Prime Minister Theresa May said in statement issued on Sunday.

On Sunday night, May returned to her residency on Downing Street to hold a meeting with the representatives if the UK's security agencies and discuss the situation in London. Later in the day, May is expected to hold an urgent meeting with the member of the government.

"We don't yet know the full details, but this was a deliberate and cowardly attack on innocent Londoners and visitors to our city enjoying their Saturday night. I condemn it in strongest possible terms. There is no justification whatsoever for such barbaric acts," London Mayor Sadiq Khan said in a statement, earlier in the day.

The incident in London becomes a third in the chain of terror attacks, which have hit the United Kingdom recently.

© AP Photo / Yui Mok
Death Toll in London Terror Attacks Rises to Six, Three Suspects Shot Dead
On March 22, an attacker identified as Khalid Masood, drove his car into pedestrians on the Westminster Bridge in the city’s center. He then left the car, armed with a knife, and attempted to enter the Parliament building. The attack left five people dead, including the attacker, and at least 50 people injured.