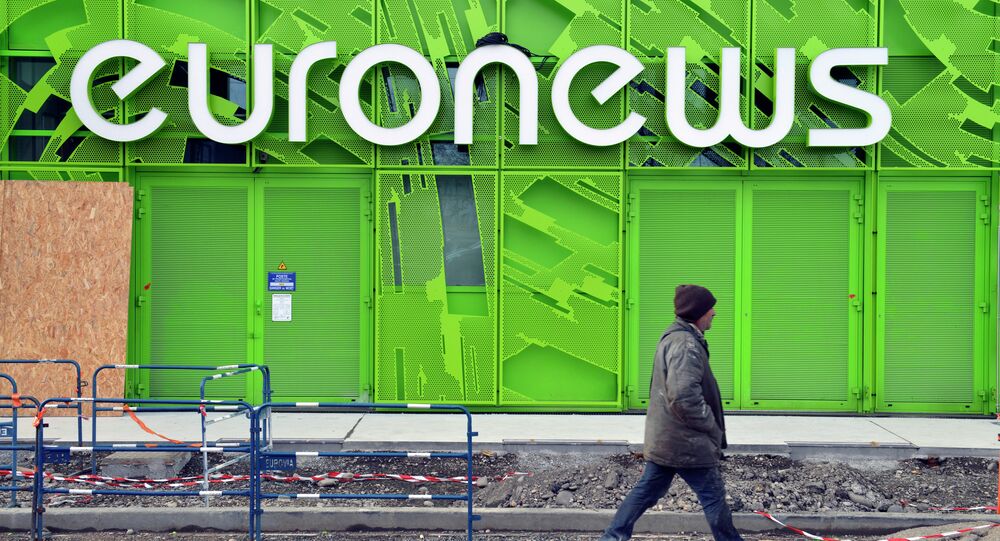 Euronews Might Become Less Objective After Selling 25% Stake to NBC

The objectivity of the Euronews news channel might be at risk, representative of the VGTRK-Company in the Euronews Supervisory Board Pyotr Fedorov told Sputnik on Thursday.

© AFP 2021 / PHILIPPE DESMAZES
Euronews Cautions Journalist for Mistake in Story on Crimean Tatars
MOSCOW (Sputnik) — The objectivity of the Euronews news channel might be at risk, following the purchase of its 25-percent stake by the NBC News, representative of the All-Russia State Television and Radio Broadcasting Company (VGTRK) in the Euronews Supervisory Board Pyotr Fedorov told Sputnik on Thursday.

The reports about the deal between the NBC and Euronews emerged on Wednesday. According to the official statement of the Euronews, the company would operate under brand dubbed EuronewsNBC, while its Chief Executive Michael Peters pointed out that the cooperation of the two companies would contribute to providing objective information to the people around the world.

Fedorov stressed that by sealing the deal the Euronews abandoned its original idea of presenting its own vision of the world events.

"And we did not expect any increase in impartiality and objectivity, including regarding Russia-related topics. We proceeded from the fact that receiving a 25-percent stake and daily control over editorial policy, as now only NBC might appoint an editor-in-chief, head of the newsroom under the agreement with the Euronews head, we did not expect any improvement in the quality of broadcasting," Fedorov said.

The VGTRK representative in the Euronews Supervisory Board said that he voted against the deal, though did not try to block it as the Euronews had been experiencing financial problems and really needed a new shareholder.

"Euronews had a very difficult economic situation… During all the meetings linked to the NBC Universal stake in Euronews, I as a representative of the VGTRK, voted against the merger. We are against this merger, but we do not block it, as we know the financial situation of the Euronews," Fedorov said, adding that the Euronews financial problems were triggered by the fact that only Russia and Switzerland were making the regular license payments to the budget.

© Sputnik / Yori Lashov
Tenfold Blooper: Euronews Admits Error in Story on Crimean Tatars Following Moscow's Remarks
He added that some organizational changes would take place after the deal, in particular, there would be held in 12 different language versions of the channel, which might have different programs, while previously there was a single version, translated into different languages.

According to Fedorov, there were several reasons which pushed the NBC to buy a stake in the Euronews. First of all, it was interested in the European market, and the deal helped the NBC Universal in becoming truly global channel. Euronews itself sought to create a "flagship channel" but it was unable to do it itself, so the idea to search for a partner arose.

Fedorov highlighted that the NBC interest was also triggered by that fact that the Euronews had a rather big Russian-speaking audience, amounting to some 300 million people, both Russian citizens and those who understand the Russian language, for instance, in the Baltic states, Germany and the Commonwealth of Independent States (CIS).

Speaking about the main stakeholder of the Euronews Naguib Sawiris, who owned 53 percent of the channel before the deal, and holds 51 percent now, Fedorov said that for him the deal with the NBC opened new opportunities, therefore, he was in favor of the deal.

Fedorov did not rule out that some public broadcasters-shareholders of the Euronews would want to sell their stakes.

"It is possible that the shares will be sold because some of the Euronews shareholders are thinking to leave," Fedorov said, adding that the Turkish shareholders, in particular, were dissatisfied with Euronews coverage of events happening in Turkey.

He stressed that the VGTRK, the share of which dropped from 7.17 percent to 2.29 percent, had its "hands free to take any decision."

Lights Out, Cameras Off: Authorities Boot Euronews out of Ukraine