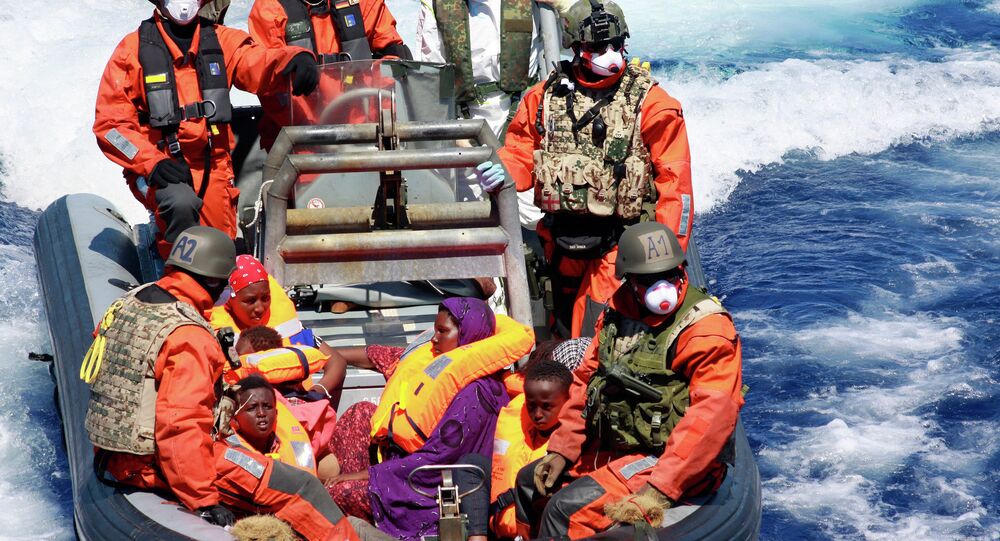 Refugee agencies have said the beaches of Libya have become dominated by people traffickers who are making huge sums out of dispatching tens of thousands of migrants across the Mediterranean because the EU has closed off other less perilous routes.

© AP Photo / Mohamed Ben Khalifa
EU Commissioners Clash With Malta Over Planned Libya Migrant Deal
Medecins du Monde blames the EU for the closure of the EU's borders, which it says has forced more migrants to be taken advantage of by the people traffickers — especially in lawless Libya. The situations has worsened because the West Balkan route has been largely closed off and Turkey is being encouraged by the EU to close its border.

As of May 30, more than 70,000 migrants arrived in Greece and Italy via the Mediterranean, with 1,729 believed dead or missing. A total of 362, 753 crossed the Mediterranean in 2016, according to the UN refugee agency UNHCR. Close to 9,500 migrants and refugees rescued over the past week and disembarked in various Italian ports.

"We need to think about new policies, it is not true that there is no alternative. We have to stop these deaths at sea. Many NGOs provide humanitarian surveillance of the sea and others were created specifically for that purpose, because states do not respect their legal obligations. We cannot remain unmoved by these deaths," Carlos Artundo, a spokesman for Medecins du Monde, told the news agency EFE.

A total of 50 bodies were disembarked over the past few days in the Italian ports of Crotone, Palermo and Catania following an undetermined number of incidents, in which dozens of others are feared dead or missing at sea, according to UNHCR.

"All refugees long for the chance to go home" — @UN interview with our Chief Spokesperson @MelissarFleming https://t.co/X5NpcNFpzm

​Some 33 people lost their lives in a particularly deadly shipwreck, including 13 women and 7 children, with dozens others feared missing. The incident happened early morning May 24. As rescue operations started, refugees and migrants panicked and the boat took on water. The three-level wooden embarkation had left Libya the night before, with 700 to 900 passengers on board, including 300 persons crammed in the hold.

A dinghy carrying 126 people, mostly from Nigeria, Ghana, Sudan and Cameroon, left Sabratha, Libya, late morning on Wednesday May 23. After a few hours, it deflated and people fell into water. An Egyptian fishing boat came to rescue them, but 82 people went dead or missing, according to UNHCR.

​"We have received deeply worrying reports of incidents at sea during crossings. Survivors disembarked in Salerno last Saturday told our staff that their boat was approached by criminals who stole their belongings and took their engine off, shooting in the air on several occasions. Luckily, nobody was wounded in the incident, " UNHCR said in a statement.

"Several refugees and migrants landed on Lampedusa over the week-end had gunshot wounds. One man told our staff that he was shot in the leg by members of Libyan militias who also stole his belongings. Another man was shot in the arm and tortured by a trafficker to extract money from him. Many survivors also reported having witnessed friends being fired at or killed while in Libya," the agency said.