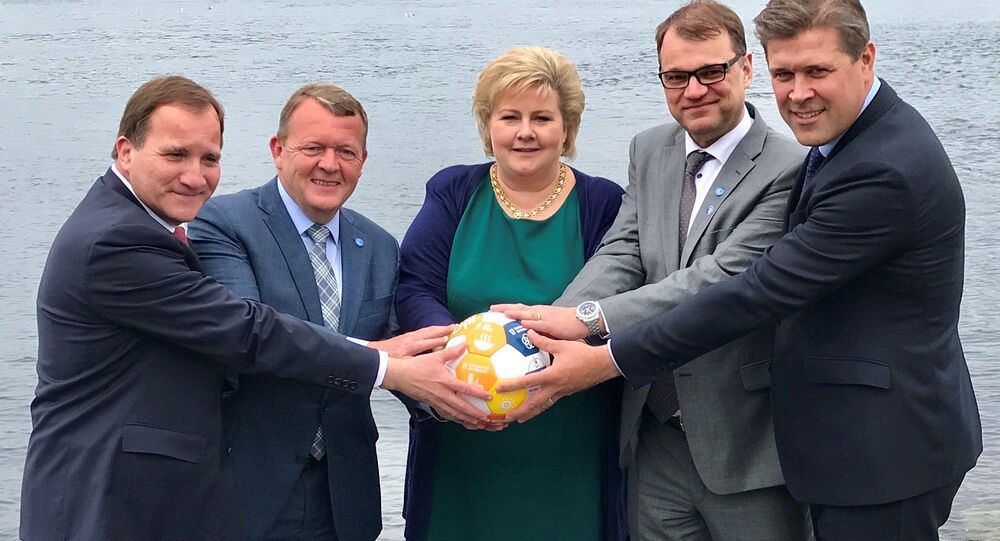 Last week, Donald Trump reinforced the endless spate of web memes with an iconic photo with a glowing orb during his first overseas trip as US president. This week, a sharp parody image made by Nordic prime ministers seems to have taken the world by storm.

© Photo : Twitter/realDonaldTrump
Trump Emerges Unscathed From 'Brawl' With Swedish Feminists
Cinematic albeit slightly surreal pictures of Donald Trump, Egyptian President Abdel Fatah al-Sisi and Saudi King Salman bin Abdulaziz that were taken during the opening of the Global Center for Combatting Extremist Ideology in Riyadh quickly generated a spate of witticisms, suggesting parallels with everything from Lord of the Rings to Star Trek.

Prime Ministers in the Nordic countries seem to have jumped on the bandwagon by posting their own friendly jab at the US President. In the picture, Sweden's Stefan Löfven, Denmark's Lars Løkke Rasmussen, Norway's Erna Solberg, Finland's Juha Sipilä and Iceland's Bjarni Benediktsson mocked the President of the United States and his Saudi and Egyptian allies by posing with their hands on a soccer ball.

Norwegian Prime Minister Erna Solberg ruled out any coincidence, as she posted a collage of the two pictures on her Facebook page with the following caption: "Who rules the world? Riyadh vs Bergen. No idea what they thought about on the top image. On the bottom image, though, the five Nordic Prime Ministers are holding a ball with sustainability targets."

The Norwegian Secretary of State Sigbjørn Aanes told Norwegian TV-channel TV2 that the image of the five Nordic Prime Ministers was not meant to be a comparison, although the similarity was apparent. He also revealed that the picture was taken when the five met in the Norwegian city of Bergen for an annual summit, which was planned long before Trump's moment of glory in Riyadh. He also called the ball in the picture an "orb of sustainability" and explained that it will also be used in Norway Cup after such a promotion by the Nordic leaders.

nordic prime minister meeting. the orb of world domination loses power and is somewhat less threatening on these latitudes. pic.twitter.com/t5K7NfQOqu

​While the Nordic Prime Ministers received a lot of praise for what was perceived as an open mockery of Donald Trump, Swedish Prime Minister Stefan Löfven's press secretary Ingela Nilsson claimed that the picture had "nothing to do with Trump's meeting in Saudi Arabia," stressing that the football symbolized the UN's sustainability goals.

"This is no hint at President Trump. It has nothing to do with it," Ingela Nilsson told the Swedish tabloid newspaper Aftonbladet.

One Ball to Rule Them All! Trump's Arabian 'Orb of Power' Mystifies Social Media