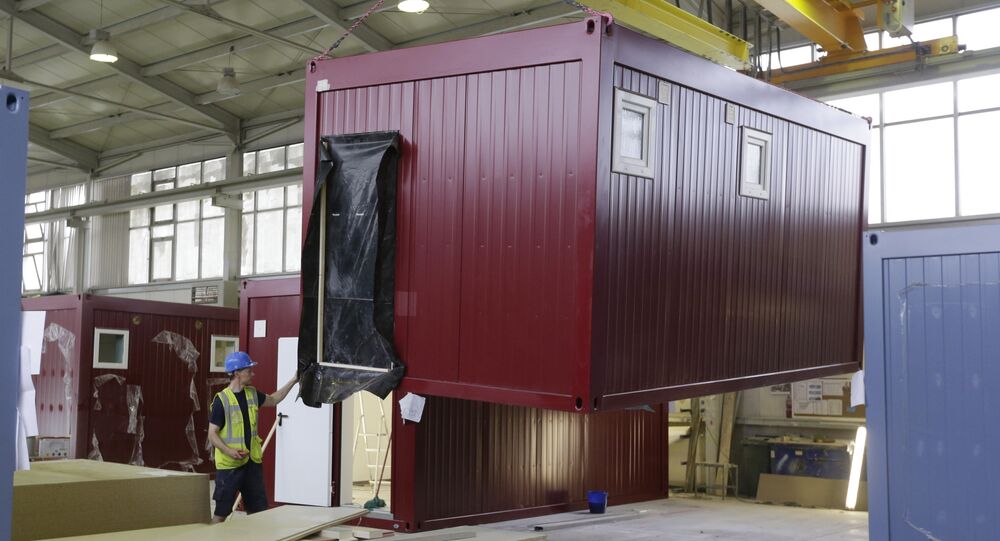 Sweden's plan to plug the widening housing gap with cheap modular houses raised experts' eyebrows when it was first presented amid the raging migrant crisis of 2015. Almost two years later, experts' skepticism proved to be justified, as modular housing schemes not only received a giant price tag, but were also paralyzed by neighbor conflicts.

© Photo : Pixabay
Full House: Sweden Using Scrapped Containers as Homes
In 2015, many experts warned the Swedish government that then-Housing Minister Mehmet Kaplan's idea of bridging the housing shortage with "cheap" modular homes would not only be expensive, but actually of no help in alleviating the housing crisis.

The construction companies JM and Veidekke were among the first that slammed modular housing. Veidekke CEO Lennart Weiss roasted the idea of modular homes in an interview with the Swedish newspaper Dagens Samhälle as far back as in April 2015.

"This would be the worst homes at the highest cost ever. Modular houses are an economic, social and political disaster. This promotes exclusion and shows that Swedish politicians fail to display a holistic approach to the housing crisis," Lennart Weiss said.

The idea of modular housing was also slammed by Ulf Perbo, one of the government's foremost housing experts.

"It will be very substandard housing at an overblown cost. It seems like a pure panic reaction which is likely to characterize [Sweden's] housing policy for 10-20 years to come," Ulf Perbo said.

© AFP 2021 / JONATHAN NACKSTRAND
There's No Place Like Home: 'New Swedes' to Move Into Cities of Their Own
Today, all criticism of the ill-conceived system seems to be justified, as the "quick" modular houses clearly failed to become the solution the Swedish government and municipalities had been hoping for. The Swedish Association of Local Authorities and Regions (SKL) now advises municipalities to choose permanent solutions instead of temporary ones, which prove to be cheaper in the long run. According to SKL housing expert Jan-Ove Östbrink, modular homes became a difficult process even for large municipalities.

In the city of Malmö, not a single modular residence has been completed until now, two years after the refugee crisis. Meanwhile, the rent for 21 square meter apartments stacked on top of each other has reached 6,000 SEK ($700) a month.

© Flickr / Anders Lejczak
Desperate Sweden Banks on Hotels to Combat Homelessness, Housing Shortage
The construction of modular houses has also been stopped in Gothenburg. Of the 1,000 modular homes slated for construction, only 57 have been completed. Additionally, complaints about sky-high rents and neighbors' noise are being heard. In the only modular block built so far, a three-roomer of 70 square meters costs about 21,000 SEK ($2,400) per month.

"It has become more difficult to build temporary houses than to build a permanent house. We have a precarious position. The state and municipalities have not worked in sync," Jahja Zeqiraj of the Gothenburg Property Board said.

According to Swedish housing portal Hur vi bor ("How we live"), nine out of ten Swedes live in a municipality that is suffering from a housing shortage. According to previous estimates by the Swedish Housing Board, a total of 710,000 new homes will be needed in Sweden, a nation of 10 million, by 2025.

Refugees Refusing to Leave Sweden Regardless of Situation at Home