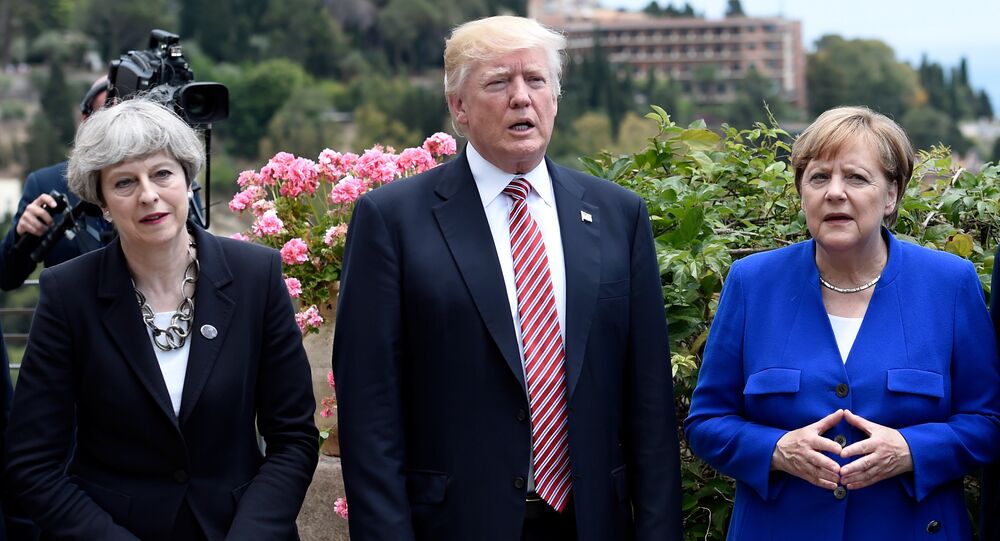 How to Lose Friends and Alienate People: Reactions to Trump's Eurotrip

According to German magazine Der Spiegel, President Donald Trump slammed the German-US trade deficit as unacceptable. Focusing on the German car industry, Trump is reported to have said, "The Germans are bad, very bad." The White House has attempted to soften the president's stance amid growing negative press coverage of Trump's European tour.

© AP Photo / Pablo Martinez Monsivais
Run That By Me Again? German Chancellor Schools Trump on Trade 101
The first meeting between US President Trump and NATO allies was never going to be a jovial one.

There was too much bad blood.

A combination of dismissive comments from the US president on the organization being "obsolete," together with pointed comments by German and EU officials on the dangers of "building walls" — which many commentators took as a deliberate reference to Trump's Mexico border wall policy — resulted in tension ahead of the Brussels summit.

Now German journalists at Der Spiegel are reporting that this tension boiled over into angry remonstrations from Donald Trump against German car manufacturers during a meeting with the European Commission President Jean-Claude Juncker and the European Council President Donald Tusk.

"The Germans are bad, very bad," President Trump said, according to participants in the room who spoke to Der Spiegel.

"See the millions of cars they sell in the US, terrible. We will stop this."

In 2016, Germany had a US$64 billion trade surplus with the US. Trump's top trade advisor, Peter Navarro, has accused Germany of currency manipulation — like the Chinese — through "grossly undervaluing" the euro to boost exports.

However, threats to curb Germany's car exports to the US have exposed President Trump to accusations of hypocrisy.

The billionaire media mogul is thought to have an extensive collection of foreign cars, as was noted on Twitter by Californian Democrat Congressman Ted Lieu.

Dear @realDonaldTrump: Do you consider it "bad, very bad" that you own a bunch of German cars? https://t.co/Cdo4lWT5RT

Trump's former clothing line Donald J. Trump collection — which included ties, suits, and dress shirts — was manufactured outside the US in Bangladesh, Vietnam and Honduras.

Trump has voiced his frustrations with Germany's trade surplus with the US before.

In January 2017, he threatened to impose a 35 percent tax on German auto imports.

"If you want to build cars in the world, then I wish you all the best. You can build cars for the United States, but for every car that comes to the USA, you will pay 35% tax," he said in an interview with German newspaper Bild.

However, he has also attempted to negotiate a bilateral trade deal with Germany when he met with German Chancellor Angela Merkel in March.

However, Merkel rebuffed President Trump, insisting that all deals with EU member countries must be made multilaterally with the EU.

This latest row ads to a rocky public display of the relationship between the US and NATO states.

European Commission President Jean-Claude Juncker has dismissed the quotes by Der Speigel on Friday, May 26, insisting that the German reports were exaggerated.

Except it's not true: Juncker says Trump was not aggressive on German trade surplus@Reuters https://t.co/qswRXmONX9 https://t.co/HcWqqNIpga

"He did not say that the Germans were behaving badly," Juncker told reporters in Sicily ahead of G7 talks.

"He was not aggressive at all and anyway we have taken the defense of the Germans," he continued.

Nonetheless, some US political commentators have expressed concern that Trump's treatment of the US' European allies could elicit a freezing effect on cooperation.

President Trump has also been widely lambasted by the international press and mocked on social media for shoving a European leader — the Prime Minister of Montenegro Milo Dukanovic.

Slo-mo: Trump appears to push aside/shove another NATO leader to get to the front of the group. pic.twitter.com/K0OC6QnEL4

German Chancellor Merkel has not commented on the Der Speigel's account of President Trump's conversation with top EU officials.

Under Merkel's tenure, Germany has become the third largest exporter in the world.

Ahead of Germany are China and Trump's own country: the US.