The Spanish Health Ministry and the Catholic Church have finally handed over documents relating to thousands of babies which were stolen from hospitals in Spain over many decades. A British MEP led a fact-finding mission after being alerted about a case from 1992.

But the secret network of nuns, doctors and midwives is believed to have been operating the "ninos robados"(stolen babies) ring since the era of General Franco.

Jude Kirton-Darling, a Labour MEP for the North East of England, was alerted to the scandal by Ruth Appleby, 53, whose baby went missing after she gave birth in a hospital in La Coruna in 1992.

In Madrid interviewed by @BBCLN ahead of meetings this pm with Spanish ministry of justice on #stolenbabies scandal @SharonBarbour pic.twitter.com/78HNHwFxG9

She was told her baby had died but she believes the child was actually handed over to a Spanish family.

Lawyers believe up to 300,000 babies were taken from their original parents and given to those deemed more deserving.

The practice began during the Franco era. The General, a devout Catholic who led a right-wing dictatorship in Spain between 1939 and his death in 1976, apparently give his blessing to the practice of taking children from mothers who were considered too young, too poor or of questionable political backgrounds and giving them to supporters of the regime who were unable to conceive naturally.

But the corrupt network of nuns and midwives apparently continued the practice long after the death of the Generalissimo, especially in certain regions like Galicia, where Franco was born.

In the 1950s criminal networks are believed to have become involved, with an eye on making a profit by selling babies to barren couples.

Ms. Appleby said the admission by the Spanish authorities and the handing over of archive documents was great news:

"This meeting in Madrid feels like a bit of a turning point, it feels like there's real progress being made for the first time."

Ms. Appleby only realized the authorities in La Coruna had lied to her when she requested her baby's remains be exhumed in 2010 so she could be reburied in England. She noticed the body appeared to belong to a child rather than a newborn baby.

She reported her fears to the Spanish police but says she was brushed off and then petitioned the European Parliament.

Tweet: "A search for "stolen children" campaign launched from the Franco era"

"The commitment that we have had is that the Catholic Church is willing to work with the Ministry of Health and the Ministry of Justice to pool all of their archives so families will be able to search for documents they could not previously find." Ms, Kirton-Darling said.

There are some similarities with the "Disappeared" in Argentina, although in that case the babies that were adopted and given new identities were the children of left-wing parents who were tortured and murdered by the military junta between 1976 and 1983. 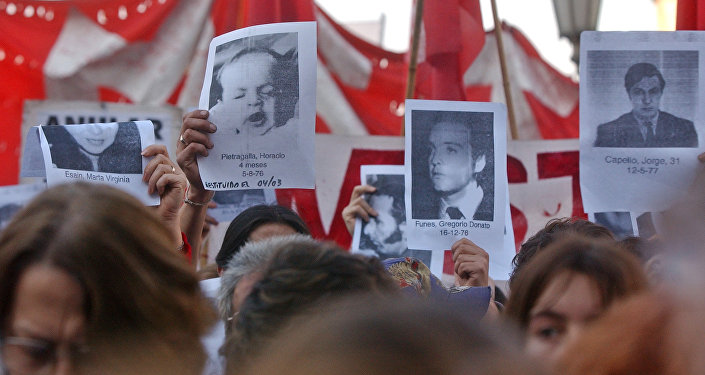 In that case 500 children were taken and given to Argentine military families, many of whom are still unaware of their true identities even today.

MPs in Spain recently voted to exhume Franco's body from a state-funded mausoleum in the Valley of the Fallen, west of Madrid. The conservative Spanish government has said it is "not a good idea" and "reopens old wounds."