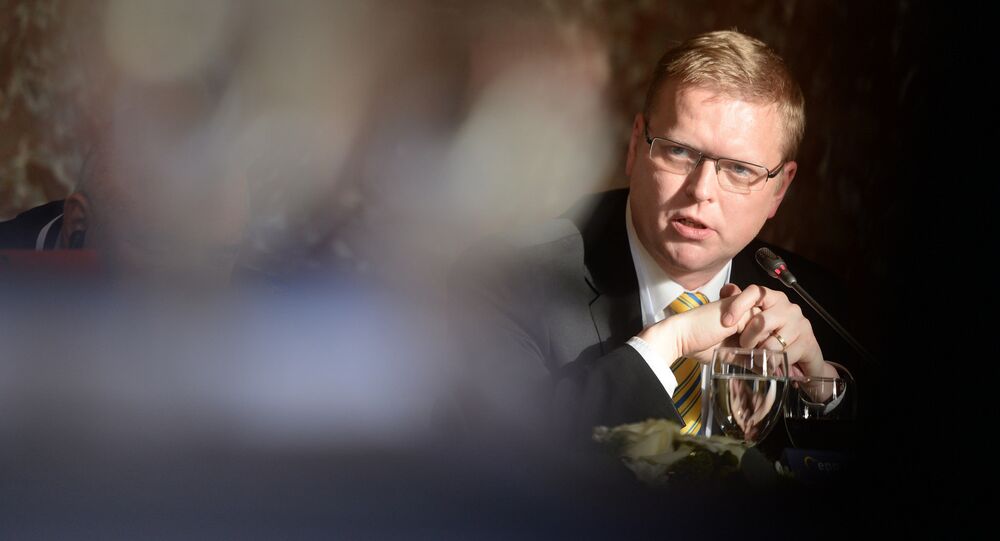 The deputy prime minister of the Czech Republic, Pavel Belobradek, has courted controversy by agreeing to attend a rally next week by a Sudeten German group. Four million ethnic Germans were expelled from what was then Czechoslovakia as retribution for Hitler's actions.

After the First World War the Sudeten Germans found themselves living in the newly created state of Czechoslovakia. They had lived for centuries under the Austro-Hungarian Empire and in the early 1930s they began chafing at the bite and demanding to be reunified with their German-speaking cousins across the border.

© REUTERS / Umit Bektas
German Press Makes Shocking Comparison Between Erdogan and Hitler
Eventually, in September 1938, they got their way.

In April a German newspaper, Die Welt, likened Turks in Germany who supported President Erdogan to the Sudeten Germans in the 1930s.

Among the most infamous of Sudeten Germans was Karl Hermann Frank, who rose to become an Obergruppenfuhrer in the SS.

After Reinhard Heydrich was assassinated in Prague by Czech partisans it was Frank who organized the massacre of Czechs in the village of Lidice, which was carried out in retaliation and to force the Czechs and Slovaks into submission.

When the Czechs threatened to rise up in April 1945 Frank warned they would be drowned in a "sea of blood." Frank surrendered to the US Army and was hanged in May 1946 as thousands of Czechs looked on and cheered.

After the war, the Sudeten Germans were among millions of ethnic Germans who fled eastern Europe and it has always been assumed they were driven out by Czechs, Poles, Russians and other host nations.

But Czech historian Eva Hahnova published an article in 2015, which claimed the Sudeten Germans and other German-speaking people were ordered to return to the "motherland" by Nazi officials. She said it was the last great war crime committed by the Nazis. Most Sudeten Germans settled in Bavaria.

A new US$33 million museum is due to open in Munich next year to honor the Sudeten Germans and their contribution to German culture. Among the most famous Sudeten Germans were composer Gustav Mahler and poet Rainer Rilke.

The Sudeten Landsmannschaft (SL) group was set up years later to campaign for the return of property which had been taken from the Sudeten Germans.

They dropped that claim in 2015 but the Sudeten German issue remains a sensitive one in the Czech Republic.

SL is holding its 68th annual rally in the German city of Augsburg on June 3 and 4 and Mr. Belobradek has agreed to attend.

He is the Science and Innovation Minister in Czech Prime Minister Bohuslav Sobotka's coalition government and the leader of a junior coalition partner, the KDU-CSL.

Czech foreign minister Lubomír Zaoralek pointed out Mr. Belobradek was attending as leader of the KDU-CSL and not as deputy prime minister. But Vojtech Filip, leader of the Czech Communist Party (KSCM), condemned his attendance in Augsburg.

In 2016, Culture Minister Daniel Herman — another KDU-CSL member — was the first member of the Czech cabinet to officially attend a SL rally.

Mr. Belobradek said he would be in Augsburg to try and foster reconciliation between Czechs and Sudeten Germans.

"[After the war] the Sudeten Germans were sent to both western and eastern occupied zones of Germany as well as occupied Austria. Their reception varied greatly but in many areas the locals did not take kindly to extras mouths to feed and new arrivals from the 'east', so they had a tough time of it. The Red Cross and occupying authorities assisted to a degree, but arguably less so than for other displaced persons," Dr. Martin D. Brown, an international history professor at Richmond University, the American International University in London, told Sputnik.

"Under the terms of the 1946 Peace treaty the value of the land, buildings and other properties form part of Czechoslovakia's war reparations from Germany, and various Presidential Decrees, the legitimacy of which remain disputed, incorporated and sized property from enemies of the state," he added.

Dr. Brown said many Czechoslovaks moved into the properties which the Sudeten Germans had left behind while others were taken over by border guards and other state security officials.

"All the Allies had agreed to the forced removal under article 12 of Potsdam Agreement. In 1996 the Russian Federation, the UK and the USA all restated that they stood by the agreement.

"It was certainly not a topic of general discussion in Socialist Czechoslovakia but it wasn't forgotten. The expellees themselves were exceedingly vocal in West Germany calling for the return of their lands and property.

"Many western, especially American historians now claim it was forgotten but this is not correct." Dr. Brown said some Sudeten Germans have returned to the Czech Republic but he said various legal provisions have prevented them from buying their old property or lands, although some have been bought with the aid of Czech intermediaries," Dr. Brown concluded.