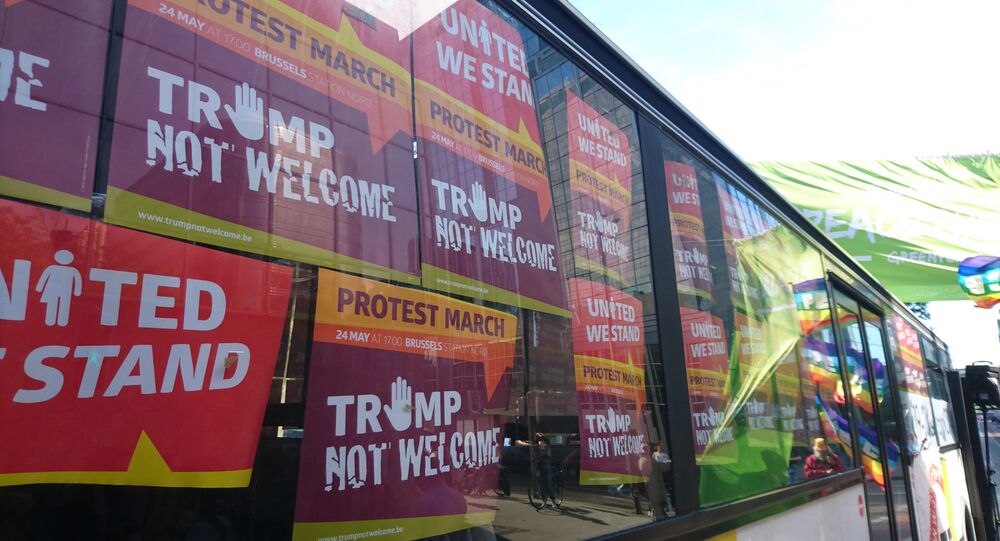 As leaders of the 28 NATO member states arrived in the Belgian capital for their annual meeting, thousands marched through Brussels in protest. While some activists held broadly anti-NATO signs, the majority of them seem to hold just one NATO leader in particular contempt – and that person is Donald Trump.

The US president arrived in Brussels following his meeting with Pope Francis at the Vatican. Besides addressing the leaders of NATO, Trump will also spend time with Belgium's royal family and the country's top government officials.

But unlike those authorities, many in the city are unhappy with the visit. Some recall Trump's harsh words about Brussels, while others dislike his domestic or foreign policy more generally.

A retired Belgian teacher came to the really with a poster proclaiming "Dump Trump," because of what he sees as "wild capitalism and war economy." Some people held rephrased versions of Trump's campaign slogans, such as "make the environment great again!" and "make humanity great again!" One woman's poster read, "I don't take orders from NATO."

The "Trump not Welcome" initiative is being spearheaded by students in Brussels and Ghent, with the support of many civil organizations, including Greenpeace, Oxfam International and Doctors of the World.

Besides Belgian activists, Germans, Cubans, people of Afghan descent, Iranians and activists from the US joined in the demonstration.

Dr. Nilufar Ashtari, an academic currently based in Belgium, came to voice fears about the US waging a war on her home country, Iran.

"I hope Europe will take a firm stand against America," she said, "because if ever there is a war against Iran, we'll have repercussions in Europe — in terms of extreme right, and because of refugees."

Americans who took part in the Brussels rally have other concerns, from bringing Bernie Sanders back into the political spotlight to fixing US and NATO's major international missteps.

Ann Wright, a retired US army colonel and a prominent peace activist, told Sputnik she came to the rally to say no to NATO, which, in its current state, is not as much about security as it is about making enemies.

"I feel that it's important that my voice is here to say that the military exercises NATO is having right on the border with Russia are very provocative and very destabilizing," she said. "And these types of things NATO is doing to provoke military responses, and not for the security of the world, but to make money for weapons manufacturers."

While the leaders of the alliance convene at the new NATO headquarters on the outskirts of Brussels on May 25, peace activists plan to hold their annual peace conference in the city.

As for Trump, it will be his first face-to-face talks with all the NATO leaders, a good chance to discuss the alliance's most pressing issues, like members' defense spending, as well as the US' commitment to Article 5 of the NATO treaty, which ensures the safety of all member states.

A Bolt From the Blue: Russia Now Strategically on Par With NATO

Crucial Deal Agreed Over NATO Row Between Turkey and Austria