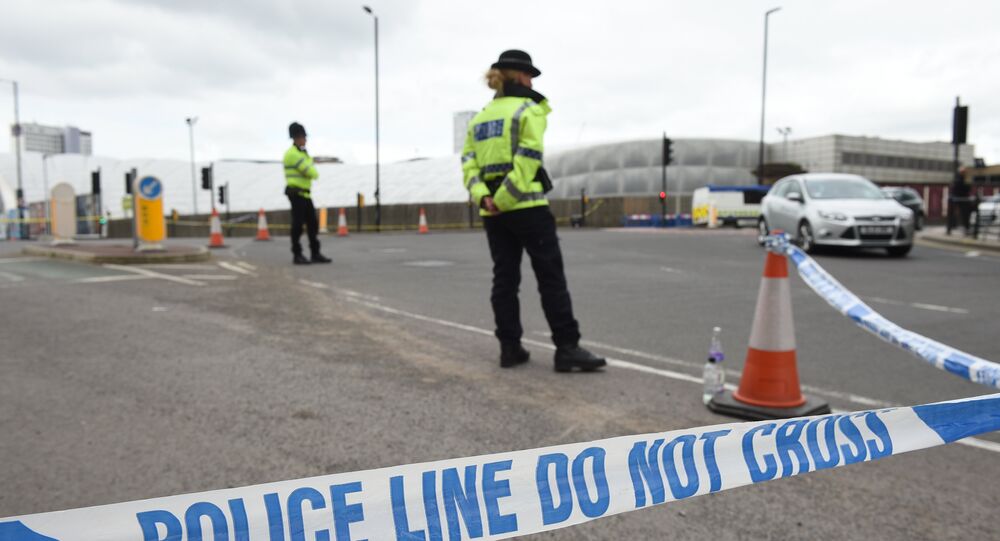 The United Kingdom late on Tuesday raised the level of terrorist threat in the country from "severe" to "critical" following the Manchester attack, which left 22 people dead and some 120 injured, UK Prime Minister Theresa May said.

© AFP 2021 / Oli SCARFF
#ManchesterAttack: 'There is No Way We Can 100% Protect Every Possible Target'
MOSCOW (Sputnik) — On Monday night, an explosion occurred outside the Manchester Arena at the end of US singer Ariana Grande's concert, with Daesh (banned in Russia) terror organization reportedly claiming responsibility for the attack. UK police named one Salman Abedi, 22, the perpetrator of the attack.

This is the third time the threat level is raised to "critical," and the police hope it will not last for a long time.

© REUTERS / Peter Nicholls
Man With Knife Detained in Birmingham During Vigil for Manchester Attack Victims
In August 2016 the terrorist threat level was raised to "critical" for the first time, following the so-called transatlantic aircraft plot, which targeted as many as 10 aircraft bound for the United States and Canada. The plot was discovered by the police and led to introduction of unprecedented security measures. The threat level was reduced back to "severe" in three days.

On June 30, 2007, the level was raised again after three terrorist attack attempts in 36 hours in London and Glasgow. The threat level remained at "critical" until July 4.

ARMY ON THE STREETS

Prime Minister May also announced that Operation Temperer was now in force, allowing members of the armed forces to be deployed to key civilian sites.

© AP Photo / Rui Vieira
Social Media Trolls Circulate Fake Manchester Attack Victim Pictures and Stories
"This means that armed police officers responsible for duties such as guarding key sites will be replaced by members of the armed forces, which will allow the police to significantly increase the number of armed officers on patrol in key locations. You might also see military personnel deployed at certain events such as concerts and sports matches, helping the police to keep the public safe," May said after a meeting of the government's Cobra emergency response committee.

According to media reports, some 5,000 military servicemen may be deployed within the Operation Temperer.

London Mayor Sadiq Khan called on the population to remain vigilant and report anything suspicious to the police.

"There will be additional police officers on London's streets over the coming days — including additional armed officers. You will also see some military personnel around London — they are there to help our police service to keep us safe and guard key sites," Sadiq explained.

SUSPECT BORN AND RAISED IN UK

Also, a 23-year-old man was detained in Manchester in connection to the attack, Greater Manchester Police Chief Constable Ian Hopkins said, with Prime Minister May stating that there is a strong possibility that "a wider group of individuals" was linked to the attack.

May called on the people to "be vigilant and to co-operate" with the police, pledging to take every measure available and provide the police and security services with every additional resource to protect the public.