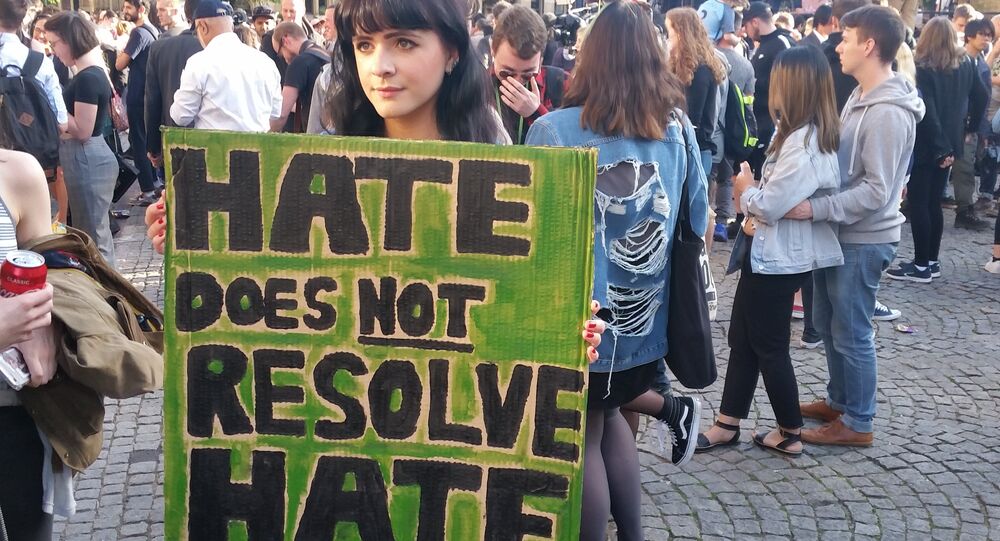 Vigils like one in Manchester on Tuesday night may seem something of a cliche, but they are the only way a community can respond to a terrorist attack.

Rifat Mirza joined a group of women from Cheadle mosque who were in the city's Albert square to send a message to Daesh after Monday night's attack on Manchester Arena, which killed 22 people following a concert by American popstar Ariana Grande.

"We are here today because we wanted to be united with everybody and show solidarity with Manchester and everybody who is suffering," she told Sputnik.

"Why did they do it? Why pick on young children who are just enjoying themselves? They have taken lives and that is against everything in the Koran and it is not Islam."

© AFP 2020 / Oli SCARFF
UK Election Campaigns to Stay on Hold Over Manchester Attack Until Next Notice
The sun shone down on Manchester but the atmosphere was eerie, with a palpable chill in the air. Less than 24 hours earlier a 22-year-old born in the city, Salman Abedi, had blown himself up outside the arena where Grande had been performing to a largely teenage audience.

Stepping off a train at Manchester's Piccadilly station I found myself confronting my own prejudices, as a stoney-faced Asian man in his 20s walked past, carrying a gray rucksack. He was an entirely innocent traveler but the bombing had triggered an illogical fear inside me. Outside the station a Sikh police officer, carrying a semi-automatic carbine, patrolled with a colleague, offering reassurance to shaken Mancunians.

Five years ago I was in this city when another lunatic roamed the streets, striking terror into the locals. Dale Cregan, armed with guns and grenades, was a gangster who killed two rivals and then lured two women police officers to their death. He had a vendetta against Greater Manchester Police.

But the fear this time is different. It's random.

In what deranged mind are eight-year-old girls like Saffie Roussos — one of the first victims to be identified — military targets in a "holy war"? What was her crime? To idolize an American singer who belted out sassy but harmless tunes? Grande's fashion sense may offend Salafist zealots but she is not living under the shrinking "caliphate" of Daesh. To deliberately target such innocents is anathema to all but the hardest hearts.

Megan Walsh, 22, from Salford, told Sputnik: "Things like this are always awful but it was just kids. It's just disgusting. It makes the whole thing even worse."

Rabbi Solomon Liberow, who works in Manchester's schools, said he had come to the vigil to show solidarity.

"Suicide bombings started in Israel and no-one believed they would come to the West," he told Sputnik.

Aiden Fairs, 21, a concrete contractor from Huddersfield, thought the attack had been brought about by the West's intervention in Iraq, Afghanistan and more recently Syria, although he was quick to point out that those who died were entirely innocent victims.

There were around 5,000 people at Tuesday night's vigil and they represented every community in a very multicultural city.

Afshan Choudry, a Muslim, said, "In the Koran it says if you kill one person you kill mankind. These people are not Muslims. They're insane."

© AP Photo / Gregorio Borgia
Italy Plans to Beef Up Security in Wake of Deadly Manchester Attack
Manchester is a city which has been ravaged by Goering's Luftwaffe and IRA bombs. It will move forward after this.

As the Lord Mayor of Manchester, Eddy Newton, told the crowd, the city will never forget the victims of May 22.

Many of them were the flowers of youth from northern England and Scotland. They traveled to the city for what they thought would be a fun night out, a school night treat. Instead they were visited by evil. An evil which sadly is still finding weak-minded and deranged recruits.