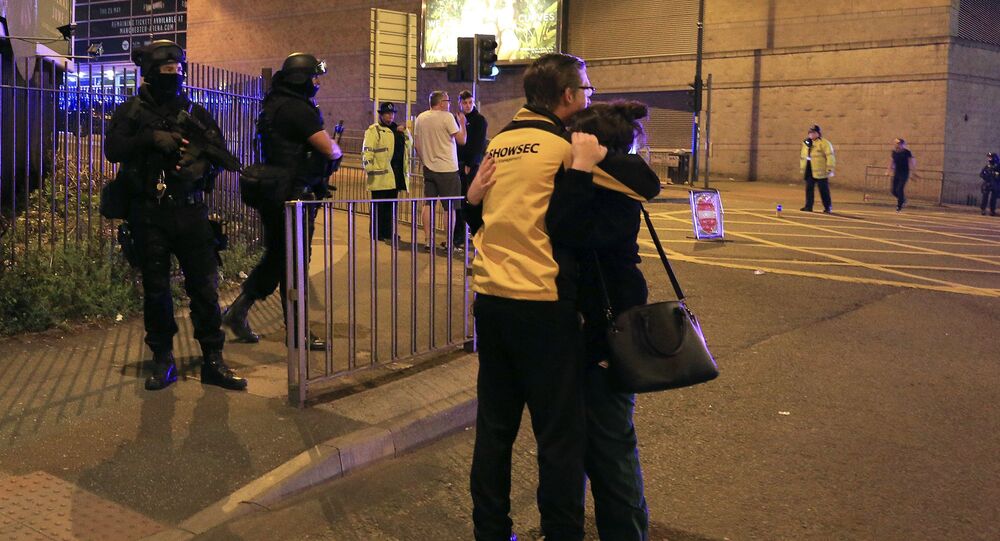 'Horrific Incident': What is Known So Far About Manchester Suicide Attack

At least 22 people are reported to have been killed and 59 injured in a suspected suicide bombing outside Manchester Arena, one of the busiest and biggest live entertainment venues in the world, minutes after a concert by American pop singer, dancer and actress Ariana Grande ended.

The explosion took place at approximately 9:30 pm GMT, causing panic among those attending the event. In its latest statement, Greater Manchester police described the attack as "the most horrific incident we have had to face" in the city in the northwest of England.

"Families and many young people were out to enjoy a concert at the Manchester Arena and have lost their lives. Our thoughts are with those 22 victims that we now know have died, the 59 people who have been injured and their loved once. We continue to do all we can to support them. They are being treated at eight hospitals across Greater Manchester," the law enforcement agency said.

​Law enforcement officers have not released identities of the deceased and the injured.

Chief constable Ian Hopkins added that the attack was most likely carried out by one person, adding that it remains unknown whether he was a part of a larger network. "The attacker, I can confirm, died at the arena. We believe the attacker was carrying an improvised explosive device which he detonated causing this atrocity," Hopkins said.

UK authorities have urged locals to avoid the area since emergency services are still working at the scene.

Footage taken at Manchester Arena shows people rushing to exits after they heard the sound of the explosion.

Footage of inside the concert @ManchesterArena. You can hear the boom and everyone frantically running to the exit. pic.twitter.com/Ab36LRaTCf

Video taken from the Manchester Arena at the Ariana concert. This truly breaks my break. pic.twitter.com/dHq5N5X80y

​​People have taken to Twitter to express condolences to the victims and to help locate those missing after the suspected attack.

DON'T STOP RETWEETING UNTIL THEY'RE ALL FOUND🙏🏼😭 #Manchester pic.twitter.com/Ygje1tkx6M

My friend still isn't found please I'm begging you if you see her dm me #ManchesterArena #ariannagrande pic.twitter.com/yXt79LSXCB

Local taxi drivers are reported to have offered their services free of charge to help concertgoers get back home or reach emergency services.

#Manchester everyone help share this! If you are from hull and have family in Manchester, message him and he will help! #ManchesterArena ❤️ pic.twitter.com/Bs1UEIGlEq

​Some have offered food and shelter to those stranded after the explosion.

​Messages of condolences have poured in following the deadly attack.

© AFP 2020 / Paul ELLIS
LIVE UPDATES: Multiple Fatalities, Hundreds Injured as Blasts Rock Manchester Arena
"We are working to establish the full details of what is being treated by the police as an appalling terrorist attack," UK Prime Minister Theresa May said in a statement. "All our thoughts are with the victims and the families of those who have been affected."

First Minister of Scotland Nicola Sturgeon described the news as "heartbreaking," saying that her "thoughts are with all those who have lost loved ones or been injured in this barbaric attack."

"Canadians are shocked by the news of the horrific attack in Manchester tonight. Please keep the victims and their families in your thoughts," Canadian Prime Minister Justin Trudeau tweeted.

Canadians are shocked by the news of the horrific attack in Manchester tonight. Please keep the victims & their families in your thoughts.

​Bill English, the prime minister of New Zealand, said that "our condolences go out to any families who have suffered from this … It is devastating for parents if their young ones go off to entertainment, no one expects them to lose their lives in such a cruel and unpredictable way."

The White House has not released a statement yet, but Press Secretary Sean Spicer said that United States President Donald Trump has been briefed on the incident.

​"Heroic Manchester, dark evil cannot overcome it. We pray for those in sorrow on the hard journey of loss & pain, & for those who protect us," Archbishop of Canterbury Justin Welby said.

© REUTERS
WATCH: Chaos At Manchester Arena Following Explosion At Ariana Grande Concert
Mayor of Greater Manchester Andy Burnham described the bombing as "an evil act," pledging to "do whatever we can" to support the relatives and friends of the victims. "We are grieving today but we are strong," he said.

Following the attack at her concert, Ariana Grande tweeted that she was "broken."

"From the bottom of my heart, I am so so sorry," the singer said. "I don't have words."