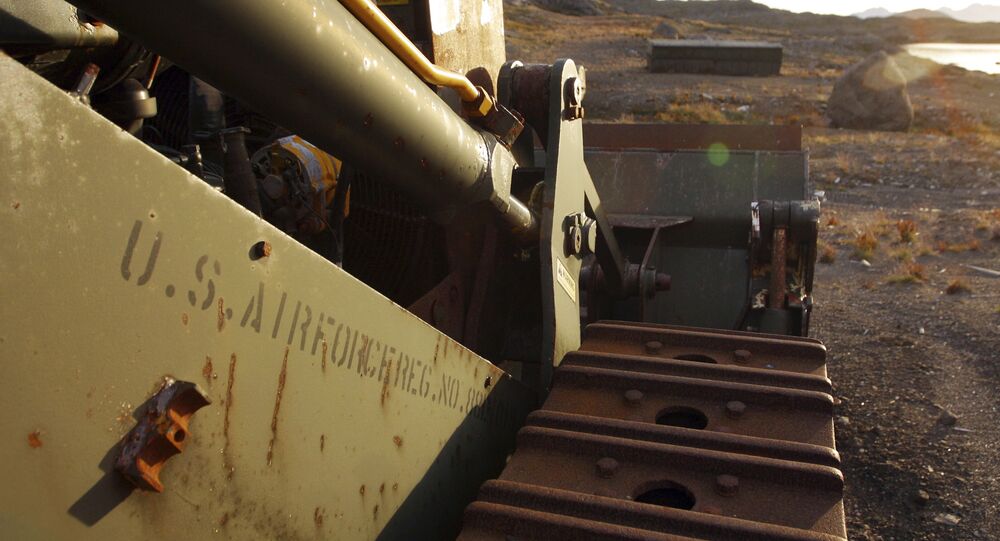 Greenland Dishes on Denmark to UN over US Junk, Then Backtracks

The toxic remnants of the US military bases in Greenland, some of the world's most pristine areas, continue to sow seeds of discord in the Danish Realm and recently the bitter row over the responsibility for the clean-up has gained a second wind.

© AP Photo / John McConnico, FILE
NASA Maps Radioactive US Cold War Redoubt in Chilly Greenland, Poised to Poison North Atlantic
Greenland, which would like to see the mess from former US military bases cleaned up, accused Denmark of reneging on its ecological responsibilities after the US military presence and complained to three different UN institutions.

In addition to accusations of neglecting its responsibilities, Denmark was also scolded for failing to provide adequate compensation to Greenland for hosting the US military base. This complaint marked the first time that a beef between Denmark and Greenland was been brought before the UN.

"This is about making the Danish Government treat Greenland correctly. We've been asking for answers for four years. That is the essence," Former Greenlandic Foreign Minister Vittus Qujaukitsoq told the Danish newspaper Information.

Carsten Staur, the Danish ambassador to the UN in Geneva, confirmed that he delivered the complaint to the UN on behalf of Nuuk to be treated in confidentiality.

© Photo : Sergey Anisimov, http://www.mamm-mdf.ru/
Greenland Pushes Denmark to Clean Up Dangerous American Military Junk
However, following Qujaukitsoq's resignation in late April, Greenland seemed to have second thoughts about its righteous cause and withdrew its complaint against Denmark "due to inaccuracies."

In her letter to the UN Special Rapporteur on the Rights of Indigenous Peoples, Greenland's new Foreign Minister Suka Frederiksen wrote that the Greenlandic National Council, Naalakkersuisut, saw the need to withdraw its complaint due to inaccuracies. The Naalakkersuisut admitted to being unable to back up all the information submitted with facts, the Danish newspaper Extra Bladet reported.

This gave rise to massive speculations that Former Foreign Minister Vittus Qujaukitsoq, who was known as an ardent supporter of a broader self-rule in Greenland, acted outside the rest of the Greenlandic National Council, which was blankly rejected by Naalakkersuisut chairman Kim Kielsen. During his tenure, who Qujaukitsoq repeatedly slammed Danish "arrogance" and threatened to leave the Danish Commonwealth.

On April 24, Qujaukitsoq stepped down in order to avoid being axed by Kim Kielsen over discrepancies over how the relations with Copenhagen shall be continued.

Greenland's UN complaint focused on pollution at abandoned US military bases. From WW2 onwards, 32 military sites were established across Greenland, of which only Thule remains in operation. The most notorious example of US military junk left to fall apart in Greenland is Camp Century. Built in 1958 at the height of the Soviet-American standoff to station several hundred nuclear missiles, Camp Century featured underground living quarters and a nuclear reactor, but was abandoned shortly afterwards, in the 1960s. Recently, it gained international attention, as researchers suggested that unknown quantities of radioactive and toxic waste, which are currently safely frozen deep in the ice, will melt only decades from now, amid global warming.

“Camp Century,” a secret military city under the ice, soon to be exposed as Greenland melts. https://t.co/42cAavp0sF pic.twitter.com/3Ei3mbUzGs

The US military bases are only one of the tense issues between Nuuk and Copenhagen. Greenland would also like to have a say in decision-making about its premier export industry fishing, as well as break free from Copenhagen's "diktat" in trade and natural resources. At present, though, Greenland is dependent on Denmark's frozen subsidy of 3.2 billion DKK ($500mln).

A short 30 min. stop at #Kangaamiut, a town with around 250 inhabitants. Since the ferry couldn't go into the harbour, a smaller boat was used to transfer the passengers from ferry to land and vice versa, so no citywalk exploration here 😅 #Qeqqata #Greenlandpioneer #Greenland #Icebergs #Travel # Repost @thesusan