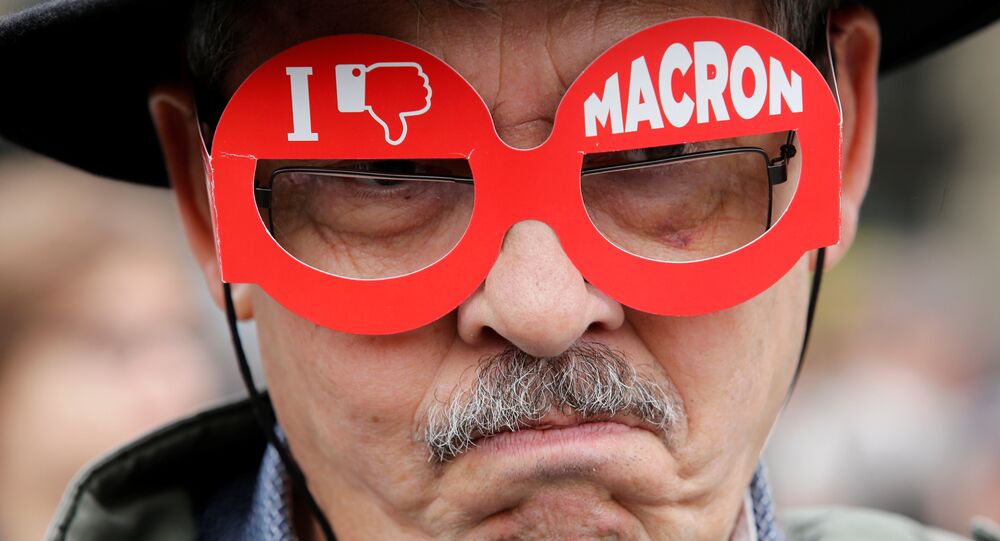 In many European capitals, Emmanuel Macron's election surely provoked sighs of relief – a reassurance France remains committed to the European Union, and European integration. However, close scrutiny of the new leader’s program reveals significant potential rifts between his proposed France and other member states, and Brussels itself.

The celebrations of triumphant Macron supporters on May 8 were no doubt punctured somewhat by a condemnatory broadside issued by European Commission President Jean-Claude Juncker. He said at the launch of a book by German Foreign Minister Sigmar Gabriel that France represented a "real problem."

​"The French spend too much money and spend it on the wrong things. That can't go well in the long run with relatively high debt — [the country] is going to have to compromise with others," he explained.

© REUTERS / Eric Gaillard
Macron Win Leaves 'Bitter Taste' Amid Calls for 'Reorientation' of EU
Juncker spoke with reference to France's projected budget deficit, which may surpass the 3 percent of GDP limit eurozone countries are compelled to abide by.

Nonetheless, despite the negative intervention, Macron — a former investment banker — may well have been receptive to the EC President's concerns. While concrete policy proposals were often lacking during his presidential campaign, his manifesto specifically pledged to stick to the 3 percent target, by cutting around 120,000 public sector jobs.

The issue for Macron himself is he leads a divided country and currently lacks legislators in the National Assembly that would allow him to push through such measures without a fight. Moreover, as his predecessors Nicolas Sarkozy and Francois Hollande found out to their cost, budget cuts and reforms to France's public sector and welfare structures are deeply unpopular.

Macron is determined to reform the EU, but of course Britain is quitting just in time to miss its chance to influence change.#Brexit #GE17

​Macron's Presidency is likely to be typified by discord and clashes — although, not all of them will be with the French people. During his campaign, he repeatedly made clear that he believed the EU cried out for reform — and he wished to play a leading role in achieving that end. Some of his reformist proposals are likely to lead to clashes with both the EU's leadership and major Member State capitals.

A key area of conflict may well be the eurozone itself. Macron promised in his presidential program to battle for the establishment of a dedicated eurozone parliament, budget and finance minister. Such proposals have not been welcomed by Germany, particularly Finance Minister Wolfgang Schauble.

Post-Brexit, Berlin is extremely wary of euroskeptic populism on the continent — the argument that Brussels calls the shots in member states and not their parliaments was evidently a seductive, energizing campaigning point. A eurozone structure that shatters any remaining illusions of national budgetary independence would play straight into populists' hands.

Moreover, such seismic changes to the functioning of the eurozone would require a treaty to achieve, necessitating a large-scale negotiation process and unanimous agreement on the reforms from all EU member states.

© AFP 2020 / PHILIPPE HUGUEN
'Two-Speed' Europe: A Last-Ditch Effort to Save the EU Bloc

The EU's reluctance to push for universal change could well produce further contention in other areas, given Macron has said greater cooperation should not be stalled by others, and willing countries must move ahead without waiting for the participation of all others.

The notion of a "multi-speed" Europe was mooted repeatedly in the lead up to the Rome Declaration, symptomatic of Brussels' intense anxieties over public opposition to greater integration. However, the concept was hotly contested by Central European leaders, who believed the phrase was a euphemism for a Europe of "first class" and "second class" countries.

At the time, Lubos Blaha, the Chairman of the Committee of the National Council of the Slovak Republic for European Affairs, succinctly summed up these fears.

"They talk about open cooperation. In fact, this will mean that if your opinion does not coincide with that of the strongest [EU members] in just one instance, you won't be able cooperate with them on other issues," he previously told Sputnik.

In the end, the highly diluted Rome Declaration simply spoke of Europe moving at "different paces… in the same direction." The document failed to offer concrete timetables or commit to any specific policies or actions.

The new president may also be cruising for a bruising in picking a fight with Hungary and Poland. He has repeatedly called for tougher action against the two countries, which he claims have disregarded fundamental EU values.

While his threats may have been electioneering, his indictments were undoubtedly unpopular in Budapest and Warsaw — and given the repeated reticence of member states to invoke Article 7 of the Lisbon Treaty, it's uncertain whether Macron's tough talk was received sympathetically elsewhere in the EU either.

Robin Huguenot-Noel, policy analyst at the European Policy Center, is highly skeptical of the efficacy of Macron's reform agenda, noting pushing any of them through could prove "politically difficult," and other EU partners may have "alternative priorities" such as migration and security.

In the former case, Macron seemed indifferent to public concerns — and in the latter, French voters widely perceived him as weak. Still, Huguenot-Noel believes there may well be hope.

EPC Publications | The French presidential election: an (E)U-turn in the making? by Robin Huguenot-Noël https://t.co/87mbeRZAHJ

​"However, in order to preclude the perspective — and the wider spill-over effects — of an irreversible French (E)U-turn, Germany and other pro-EU governments may well be tempted to help Macron deliver on parts of this reform agenda — not out of solidarity with France but out of "enlightened self-interest" aimed at securing the future of European integration," he wrote.

Macron is confirmed as President May 14. Watch this space.