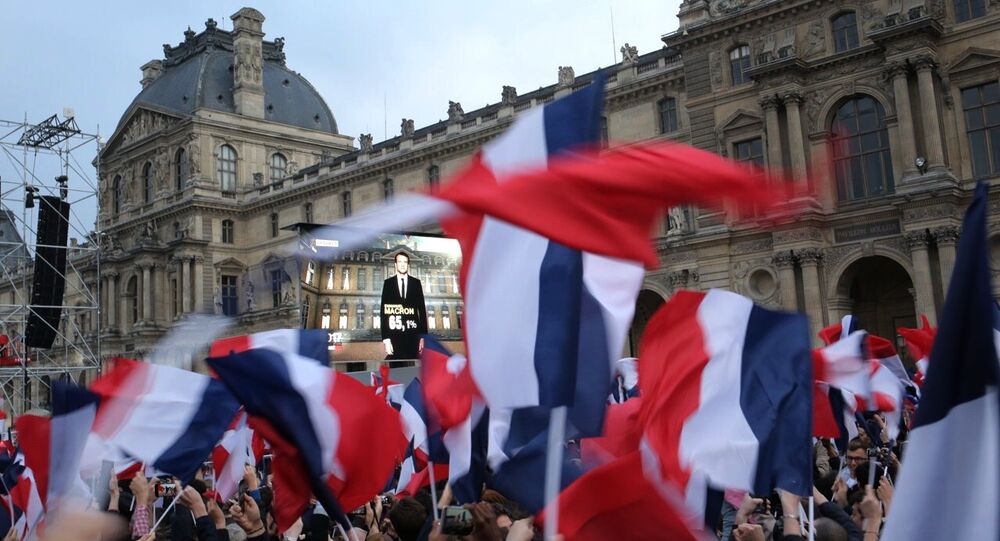 WASHINGTON (Sputnik) — On Sunday, Emmanuel Macron was elected president in a runoff election by gaining 66.1 percent of the vote to his rival Marine Le Pen’s 33.9 percent, according to France’s Interior Ministry figures.

"The first round of the presidential elections was the biggest wipe out of traditional French political parties in history," international affairs analyst and historian Jeff Steinberg said on Monday. "What was a big surprise was the number of French voters who either stayed home or voted blank ballot. The political establishment is in big trouble."

The election outcome, Steinberg claimed, was a humiliating outcome for the Gaullist and Socialist Parties that have dominated the politics of the Fifth Republic for nearly 60 years.

© REUTERS / Francois Lenoir
Macron's Win in French Election: More Anti-Russia Sanctions, More 'NATO Must Expand'
Although it was a foregone conclusion that Le Pen would lose, she got 34 percent of the vote, Steinberg noted, doubling the party's support.

"The National Front is hardly dead as the result of the election," Steinberg pointed out.

More refined voter analyses will likely show that Le Pen drew votes from the left as well as from her more traditional rightwing voter base, Steinberg suggested.

© REUTERS / Gonzalo Fuentes
Macron Overcomes Weak Support to Win French Election by Not Being Le Pen
National Assembly elections in June will determine whether Macron will be able to govern, Steinberg predicted.

"[The] National Front could significantly boost their size in the National Assembly. Macron has a slate of untested candidates, so it will be important to see if he can build a new political institution around his electoral victory," he remarked.

"Le Pen wanted to restrict immigration into France, erect high tariff walls around France, and likely might have tried to lead France out of the EU. None of that will likely happen now," he pointed out.

In contrast, Macron has said he wants to reform the French economy by cutting corporate taxes and liberalizing the 35-hour work week, Eland noted.

However, Macron must do more than make modest reforms to bring enough prosperity to France to ameliorate the nationalist threat from Le Pen in the future, he predicted.