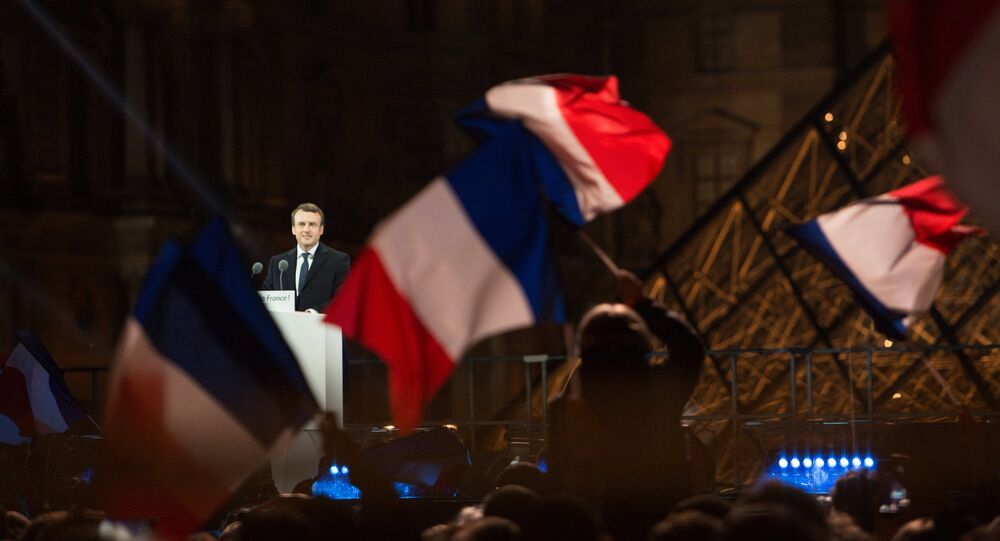 PARIS (Sputnik) — The first activities of Emmanuel Macron as the president of France will be connected to the improvement of the country's economic policies.

According to Daniel Boy, Senior Researcher at the Centre for Political Research at the French Sciences Po university (CEVIPOF), Macron will focus on dealing with the unemployment as soon as he starts his activities as a president, because during the elections campaign a lot of Macron's promises concerned this phenomenon.

"It has been a longtime challenge in the French political context: France is facing high unemployment rates and sees low economic growth," Boy stressed.

© AFP 2021 / PHILIPPE WOJAZER
French People in Regions Skeptical About 'President of Rich' Macron
He added that both left and right parties had previously tried to come up with a solution however the efficient actions had not been taken to combat unemployment in France which sees one of the highest unemployment rates in Europe. During her campaign, Macron's rival Marine Le Pen offered a solution to the problem, which implied closing France's borders in the face of globalization.

"Macron has an opposite vision: if we need to live in the globalized world, we need to develop, and change the general attitude regarding labour [abandon the 35-hour workweek], and be more flexible at the same time," Boy suggested.

As for other Macron's activities as the new French president, Emerson mentioned the improvement of the societal relations with the immigrant communities, and the reestablishment of the positive sentiments toward the European Union among the French.

"[Macron's] major priority will be to relaunch positive momentum for the European Union, in the sense of openness to develop new active initiatives, for example in the direction of the European Border Guard, active use of his military in peace or conflict resolution situations, and a sustained support for principled multilateralism. He will stand therefore for a traditional European-style international order," Emerson explained.

However, in order to implement his project, Macron will firstly need to win the parliamentary majority during the French parliamentary elections scheduled for June 11 and 18, according to CEVIPOF's senior researcher.

"Giving the existing election procedure, it will not have a hundred of elected [members of parliament], they can have 10, 15 maximum. So the National Front is not a threat to the parliamentary majority, which Macron wants. It’s a threat because it’s a very strong, coherent and hostile opposition, which he is obliged to count with," Boy pointed out.

According to the French Interior Ministry's data, Macron won the second round of the election which took place on Sunday, with 66.1 percent of the ballots against 33.9 percent of voters who had supported Le Pen.

Media reported earlier on Monday, that Macron's inauguration would take place on Sunday.

Trump, French President-Elect Macron to Meet on May 25 at NATO Summit