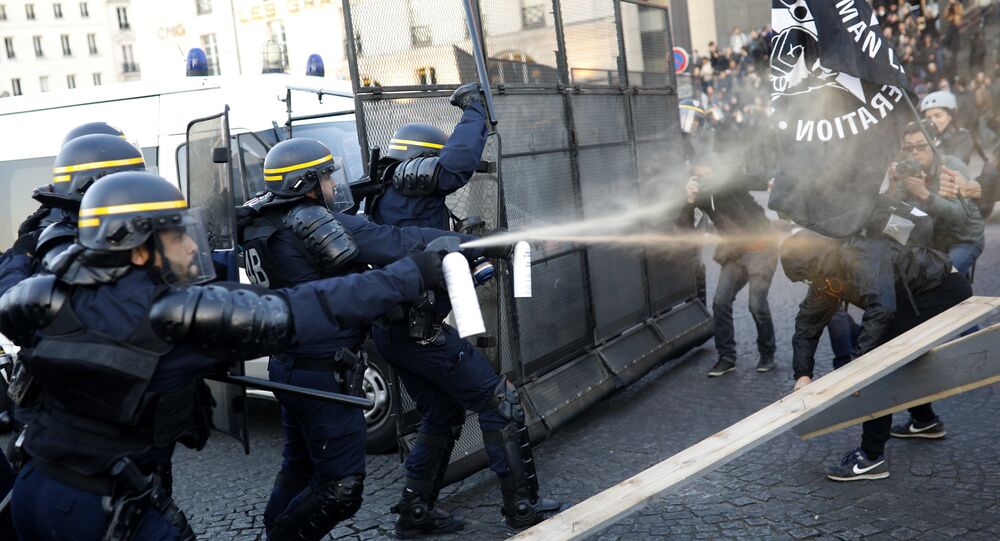 A number of protests erupted in the French capital city following the victory of Emmanuel Macron in the presidential elections on Sunday, in which he had received 66.1 percent of the votes.

Youtube/Sputnik France
Violent Clashes Erupt in Paris Following Macron Win
MOSCOW (Sputnik) — Following the announcement of first preliminary results of the elections, clashes erupted late on Sunday between anti-fascist activists and police in Menilmontant area in the 20th arrondissement located in eastern Paris. Police officers used tear gas after demonstrators threw bottles at them, shouting slogans against fascists and capitalists. Reinforced police units, equipped with shields and helmets, then blocked the bar where protesters gathered after the manifestation, slowly pushing people away from the entry to the building.

During the protest in Menilmontant, French police officers detained RT broadcaster correspondent Charlotte Dubenskij despite the fact that she had shown them a press card. The correspondent was later released as police did not file any charges against her.

On Monday, protesters gathered at the Place de la Republique square in Paris, with some people carrying banners saying "He is not our president" and "The first enemy of working people."

According to a Sputnik correspondent, police used tear gas and rubber bullets against the participants of the rally against elections and set up cordons en route. The correspondent added that protesters had also thrown a firecracker at a police cordon.

During the rally, police assaulted a Sputnik correspondent, confiscating her safety helmet and mask and almost breaking her phone which she was using for a live broadcast. The correspondent later said she felt well and did not receive any serious physical injuries.

The anti-elections protest ended at the Place de la Bastille square. According to the correspondent, it had lasted about half an hour and was said to take place again in the future.