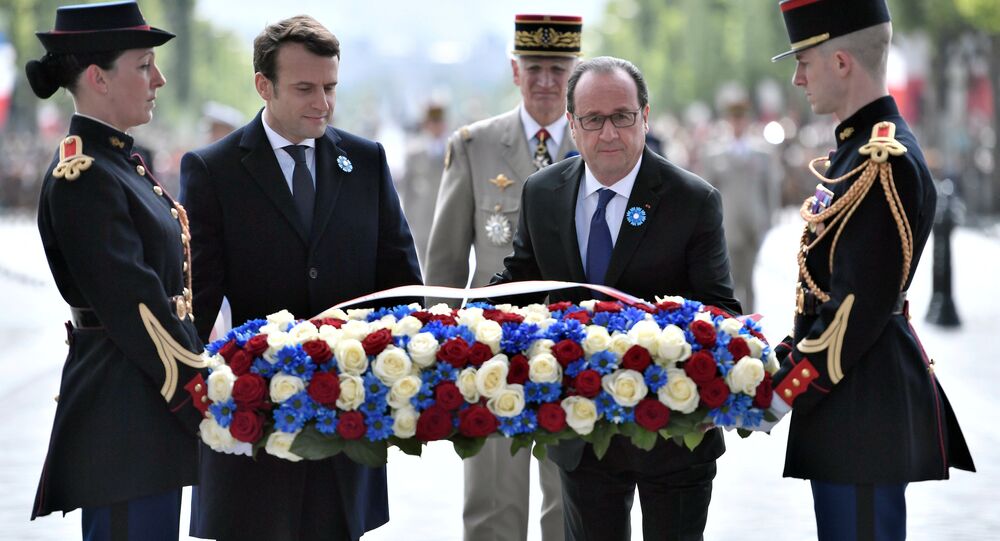 A hardline pro-Brexit group, backed by UKIP's former leader Nigel Farage, tweeted "RIP France" after Emmanuel Macron's victory in the presidential election and later posted images which suggested it was similar to the French surrender during the Second World War.

The victory of Emmanuel Macron in the second round of the French presidential election has been equated on Twitter to the French surrender during the Second World War by a group backed by UKIP funder Arron Banks and former leader Nigel Farage.

​It later posted a picture of a Second World War-era front page reading "France Surrenders" along with a caption reading: "The French rolled over in 1940. This time they've saved Germany the fuel and bullets."

The French rolled over in 1940. This time they've saved Germany the fuel and bullets. 🇫🇷 #Presidentielle2017 pic.twitter.com/SbrDoonw3s

The tweets were a reference to Macron's pro-European Union policies and his pledge to work closely alongside Germany and other EU member states in the interests of European co-operation and integration.

Some critics see Macron's policies as indistinguishable from those of Francois Hollande, who will leave the Elysees Palace with one of the lowest approval ratings in French political history.

Macron served as Economy Minister under Hollande between 2014 and August 2016.

He was at the forefront of pushing through labor law reforms, which caused violent demonstrations by trade unions.

In May 2016, more than 200,000 French workers blocked motorways, burned police cars and blockaded buildings in a vain attempt to block measures which abolished the country's national working time agreement, that imposed limits on the number of hours an individual can be asked to work before receiving overtime pay. But it is Macron's pro-EU policies, which are particularly in contrast to those of his vanquished rival Marine Le Pen, which have triggered Leave.EU's vitriolic response.

Today marks 72 years since #VEDay and the sacrifices made to protect freedom and democracy.

We liberated Europe once, we can do it again! pic.twitter.com/seIsOmtDLw

Le Pen had threatened to take France out of the eurozone and restore the franc and also said that she would hold a referendum on France's EU membership unless the EU drops free movement of people, which she claimed threatened France's national security.

Support for the UKIP appears to have collapsed since the British prime minister Theresa May took on a more hardline position on Brexit, effectively stealing the clothes of the anti-Europe party.

I warmly congratulate @EmmanuelMacron on his success and look forward to working with him on a wide range of shared priorities.

Conservatives won 561 seats in local elections that took place May 4, many of them at the expense of UKIP candidates.

Sunday, May 7, when it was clear he had won, Macron discussed Brexit in a phone call with May and he is expected to meet with her formally after his inauguration Sunday, May 14.

European Commission chief Jean-Claude Juncker tweeted that he was "happy that the French chose a European future" while Germany's Chancellor Angela Merkel said Macron "carries the hopes of millions of French people, and of many people in Germany and the whole of Europe."

Congratulations to Emmanuel Macron on his big win today as the next President of France. I look very much forward to working with him!

Meanwhile the leader of the Socialist group in the EU said today Macron's victory left a "bitter taste."

Gianni Pittella said the rise of populists like Le Pen — who garnered a third of the vote — showed there was a need for radical policies to bring people back on board with support for the EU.

Only 43.6% of Registered Voters Supported Macron as Abstention Rate Reached 25%

Hollande Will Transfer Authority to Macron on May 14