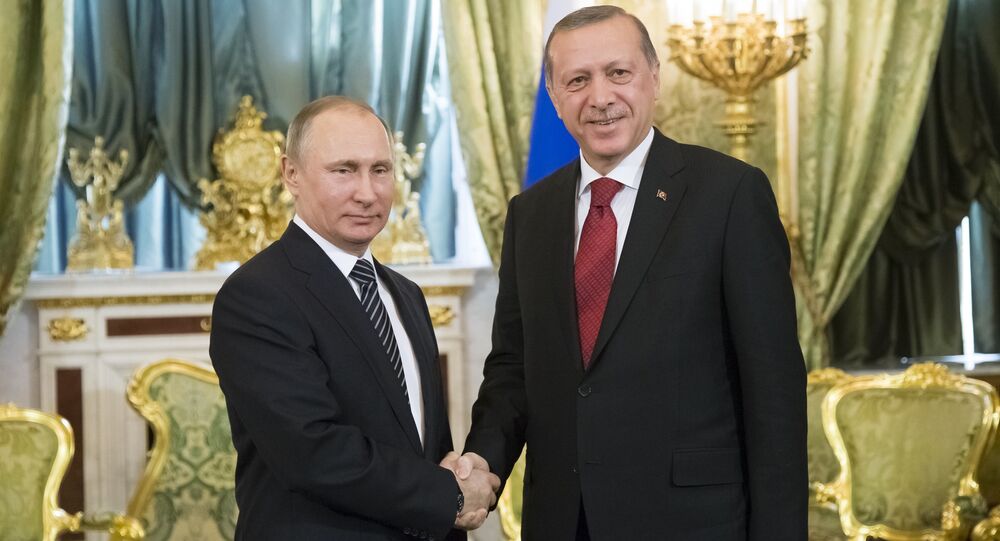 In an interview with Sputnik Turkey, Recai Berber, a member of the parliamentary faction of Turkey’s ruling Justice and Development Party, described as very important the recent meeting between Presidents Recep Tayyip Erdogan and Vladimir Putin where the two leaders agreed to lift all trade rectrictions beween the two countries.

© Sputnik / Aleksey Nikolskyi
Turkey Has 'More Points of Contact With Russia Than It Has With US'
“This is exactly what we expected from this meeting,” Berber told Sputnik Turkey.

Describing the relations between Turkey and Russia as “good,” he added that he still expected their further improvement also in light of the two countries’ cooperation in Syria.

Mentioning the two presidents’ possible impact on the situation in Syria, Recai Berber said that after Turkey, Russia and Iran agreed on a ceasefire there, they became its guarantors.

“Unfortunately, the truce has already been broken on several occasions. The region has essentially become a place where terrorist organizations feel free to do their subversive work, that’s why we need to fight them,” he said.

Recai Berber described the current buildup in Syria of terrorist organizations such as the Kurdistan Workers Party/Kurdish Democratic Union party as an irritant in Turkish-Russian relations and said that Ankara expects certain progress on this track.

“Turkey has made it perfectly clear to Russia and the United States that it will never agree to have a terrorist organization capitalize on the chaotic situation in that region to establish an autonomy there. I believe that in his upcoming visit to China [President Erdogan] will discuss this with President Xi Jinping. Turkey wants to see Syria as a single and undivided state and this is something we and Russia fully agree on,” Recai Berber emphasized.

In late-April, Turkish jets struck in northern Syria and Iraq the positions of the Kurdish People's Protection Units (YPG), which is the military branch of Syria's Kurdish Democratic Union Party (PYD).

© REUTERS / Omar Sanadiki
Russia, Turkey, Iran to Set Up Syria Safe Zones Map Working Group in Two Weeks
Russia criticized  the Turkish airstrikes against the Kurdish forces, whom it considers as an ally in the war against Daesh.

Ankara considers the PYD to be affiliated with the Kurdistan Workers' Party (PKK), which is listed as a terror group in Turkey, the United States and the European Union.

However, the PYD and the YPG, as well as the Kurdish-led Syrian Democratic Forces (SDF) have been receiving support from the United States in fighting Daesh in northern Syria.