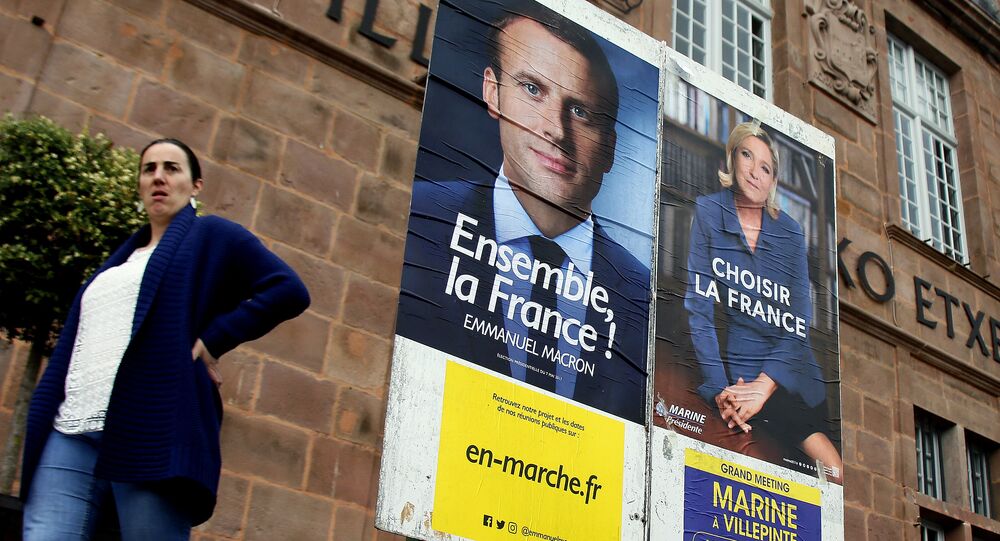 French citizens unite to fight abstention in the upcoming second round of presidential election, with spontaneous civil initiatives flourishing throughout the country.

© REUTERS / Eric Gaillard
Prince Trubetskoy Plans to Vote for Le Pen, Says Macron 'Came Out of Blue'
PARIS (Sputnik) — First step – to make it easy for whoever wants to put his ballot in the box — to reach one of the almost 70,000 polling stations, which will be working in Metropolitan France on Sunday.

On the final day of French presidential election, museums will offer free entrance to visitors with a stamped voter’s card and taxi drivers will propose a free lift to a polling station.

Some of the transportation companies, like FlixBus, offering long-distance bus trips, launched special anti-abstention campaign under the hashtag #JeVote [#IVote]. The company offers a free trip to any destination to those, who’ll make a photo in front of the polling station with their voters’ card in hand.

A western city of Laval in the Pays de la Loire department came up with an initiative entitled "BlaBlaVote." A dozen of volunteers will organize transportation between retirement homes and polling stations. The move aims to encourage the compatriots to participate in the voting.

Some taxi drivers of the Bretagne region will help those having trouble getting to the ballot station by offering free rides – initiative put in place for the first round of vote and prolonged for the second. Another treat for the voters of the region: in Saint-Malo, a local bakery will reward the customers who have accomplished their civil duty with a free croissant.

Some museums in the French capital also want to send a message. The Pantheon will offer free access with a stamped voter’s card. So will the National Museum of the History of Immigration, which will open its doors to everybody before or after having voted for free. The organization offers the visit of the exhibition "Ciao, Italia!" which traces the contribution of Italian immigrants into the French society.

© REUTERS / Charles Platiau
'Restore Order in Five Years': What Future Marine Le Pen Wants for France
According to the latest polls, abstention during the second round of vote will be stronger than during the first round, which took place on April 23, with 78 percent of population showing up at the polling stations. That’s according to the Odoxa poll, published on Thursday. It forecasts a 75-percent voter turnout on Sunday’s second round of vote. According to the Elabe poll, conducted for BFMTV and L’Express, 19 percent of those determined to vote, will leave their ballot empty.

The final round of French presidential election in Metropolitan France will take place on Sunday. According to the latest Ifop-Fiducial poll conducted for Paris Match, CNEWS and Sud Radio and published on Friday, independent candidate Emmanuel Macron is leading the race with 63 percent, while right-wing Marine Le Pen might secure 37 percent of the votes.