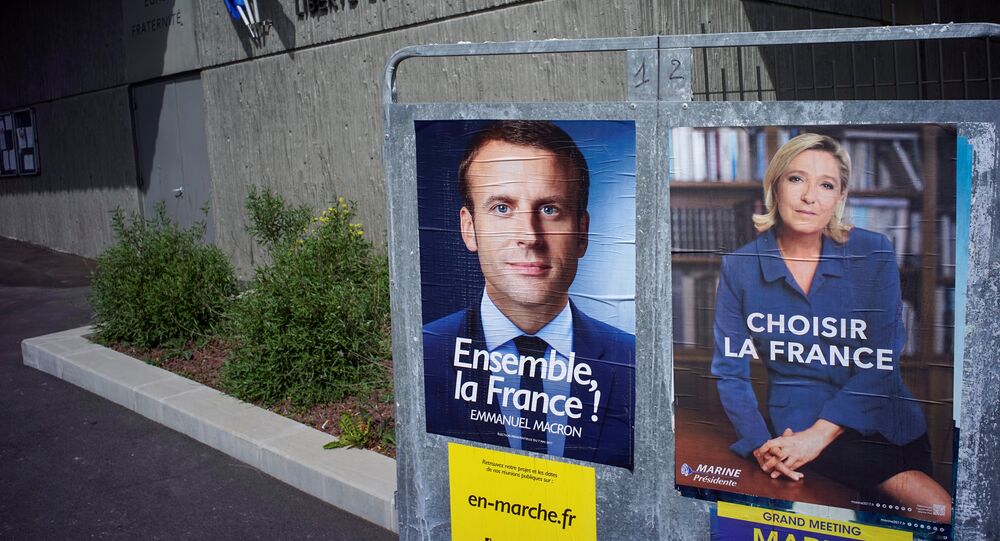 The world’s attention is glued to France as the country is set to choose its next president on Sunday from the two candidates, right-wing Marine Le Pen and independent candidate Emmanuel Macron, whose political programs strongly differ on every issue.

© REUTERS / Charles Platiau
'Restore Order in Five Years': What Future Marine Le Pen Wants for France
PARIS (Sputnik) – Candidates political programs strongly differ on every issue, including relations with Russia and the United States, the future of France in the European Union, immigration and the fight against terrorism.

Speaking of her opponent, Le Pen often used the term "ideal antipode," which illustrates the differences in the election programs of the candidates.

RUSSIA AND THE UNITED STATES

Le Pen has repeatedly stated that she plans to normalize relations with Russia in order for Europe to be able to "look into the bright future." She called the sanctions against Russia "incoherent" and recognized Crimea’s reunification with Russia, calling it "natural."

Le Pen believes that France needs to reach balance in relations with the United States and Russia, noting that there is no reason for Paris to wage a "cold war" against Moscow.

She considers cooperation in the fight against terrorism as one of the main points of relations with Russia, and believes that the two countries should exchange intelligence on the issue.

Former Economy Minister Macron also believes that France needs to conduct dialogue with Russia, but his position is harsher. According to Macron, France’s strong ties with the United States as a strategic partner must remain a priority, including the cooperation in the fight against terrorism. The candidate considers Russia a "working partner" on "regional issues," in particular on the Ukrainian and Syrian crises. Macron also supports the idea of maintaining the sanctions regime against Russia, linking it with the implementation of the Minsk agreements.

One of the key points of Le Pen’s election campaign is France’s possible exit from the European Union. The candidate softened her rhetoric on the issue a bit before the run-off, stating that she intends to replace the European Union with a "European alliance of free and sovereign states," initiating in case of her victory negotiations on a profound reform of the "totalitarian" union. If the negotiations fail, Le Pen promised to hold a referendum on Frexit.

However, the candidate noted that she was not against the united Europe, but stressed that the European project dodged from its aims. She also spoke in favor of leaving the Schengen area, bringing back national borders and leaving the NATO military command.

Macron, in his turn, is a firm supporter of European integration and considers defending the interests of the European Union and its citizens his priority, especially after Brexit. However, ahead of the second round he stated that the European Union has to be reformed or will face perspectives of Frexit, as the French were full of "anger" at the Union.

As for the single currency, Le Pen, if elected, plans to hold a national referendum on leaving the eurozone, and called euro "dead" because of the differences in the countries’ competitiveness. She also promised to return the franc for everyday operations within two years after her election, only keeping the euro for corporate payments and international operations. Macron lashed out at the idea.

The first round of the election took place on April 23, with Macron receiving 24.01 percent of votes and Le Pen finishing second with 21.3 percent.