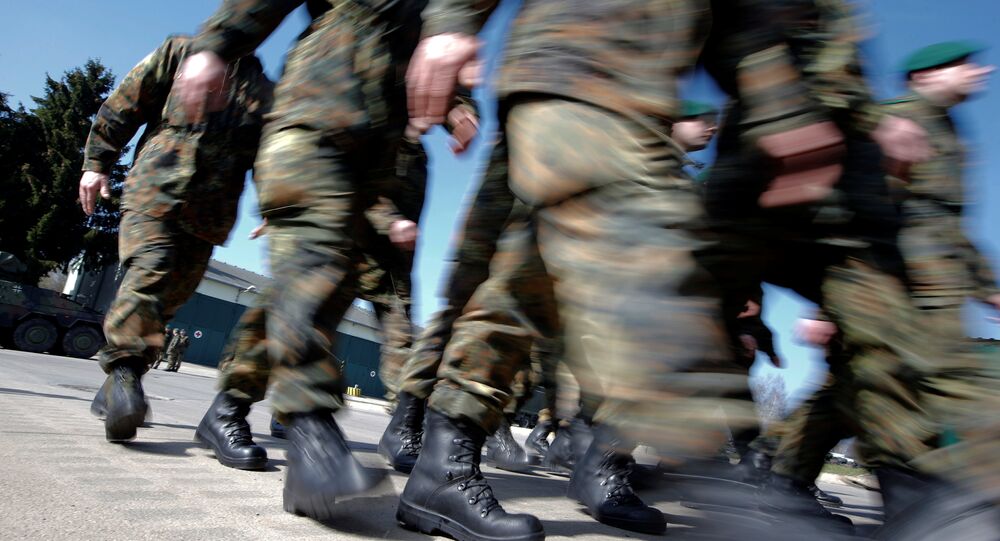 The recent string of scandals to hit the Bundeswehr, Germany’s military, is a legacy of the organization's foundation and its former Nazi leaders, military expert and former lieutenant colonel in the Bundeswehr Juergen Rose told Sputnik Deutschland.

© AP Photo / Markus Schreiber
Latest Neo-Nazi Scandal to Hit Bundeswehr Brings Backlash for Defense Minister
The recent revelation that a Bundeswehr soldier held far-right views and was allegedly preparing to carry out terrorist attacks has caused concern about the prevalence of far-right extremism in the German armed forces.

Last week, a 28-year-old German lieutenant named Franco A. was arrested on suspicion of terrorism. He had allegedly drawn up a list of terror targets including former German President Joachim Gauck and Justice Minister Heiko Maas.

In addition, the soldier had posed as a Syrian asylum seeker in Bavaria in late 2015. Astonishingly, he successfully tricked officials into launching an asylum application on his behalf, despite speaking only broken Arabic.

Although some reports claim he was preparing a "false flag" terror attack, he has not revealed what his motives were.

Since the arrest of Franco A., another Bundeswehr soldier has been arrested in connection with the investigation. According to Germany's RND News, the Defense Ministry believes that Franco A. was a member of a network of five suspected right-wing extremists operating in the German army.

The case of Franco A. is concerning because the soldier was first suspected of harboring far-right views in 2014, when he wrote a master's thesis which was rejected by his professors as a "pseudo-scientific work" of radical nationalist and racist ideas.

However, he rewrote the thesis and the soldier's superiors allowed him to remain the forces until recently.

© AP Photo / Markus Schreiber
A German forces Bundeswehr officer enters the German Defense Ministry prior to a meeting between Defense Minister Ursula von der Leyen and about 100 top officers in Berlin, Thursday, May 4, 2017.
Defense Minister Ursula von der Leyen told German broadcaster ZDF that the reluctance to take disciplinary action against Franco A. or report him to the Military Counterintelligence Service (MAD) was due to a "misunderstood sense of camaraderie" among troops.

She followed up her criticism with an open letter to the troops published on the Defense Ministry website, where she reiterated that "we can no longer speak of individual cases" and repeated her view that a mistaken sense of esprit de corps was at fault for the abuses not being reported.

The Defense Minister linked the case to a string of recent incidents of misconduct within the armed forces, including abuse of recruits and evidence of neo-Nazi sympathies among hundreds of troops.

© AFP 2021 / Armin Weigel / dpa
German Army Bulks Up, But Can the Bundeswehr Defend Europe?
Von der Leyen's public criticism of the armed forces was badly received by many soldiers, who questioned her decision to "grandstand" and publicly chastise the army for failing to report Franco A.

Juergen Rose, a military expert and former lieutenant colonel in the Bundeswehr, told Sputnik Deutschland that the Bundeswehr has struggled with far-right elements ever since its establishment in the 1950s.

"This is to do with the fact that the Bundeswehr was created in 1955 out of former Wehrmacht and Waffen SS soldiers. Konrad Adenauer, who set the Bundeswehr on its way, said, 'I can't make 18-year-olds into generals,' and the spirit of the Wehrmacht and partially the Waffen SS was a part of the army from the beginning. That is its 'birth defect,'" Rose said.

In response to this, the German general and military planner Wolf Graf von Baudissin came up with the founding principles of "Innere Fuehrung" (leadership development) and "Staatsbuerger in Uniform" (citizens in uniform) in order to better conceptualize the army's role and integrate it with the German constitution.

"By and large, the Bundeswehr fulfilled this task but this traditionalist demon has always appeared. For example, think of the Rudel Affair, when the fanatical Nazi Colonel Rudel was invited to join an Air Force Association meeting, after which two generals in the West German Luftwaffe were forced to resign," Rose explained.

"There was also the case of the right-wing Manfred Roeder, who appeared at the leadership academy in the late 1990s. The then-Defense Minister, Ruehe, had a similar problem to that which Ursula von der Leyen has now."

"Bundeswehr officers were present in uniform at the funeral of Admiral Doenitz, Adolf Hitler's successor. These are individual cases, but many individual cases form a series. In that respect, the Defense Minister is not entirely wrong that there is a leadership and attitude problem in the group," Rose said.

The former lieutenant colonel said that many aspects of military life are also attractive to people with far-right sympathies, such as its hierarchical organization, exercise of power and handling of weapons. For this reason, the army must be very careful in its recruitment in order to exclude those who hold extreme right-wing views.

© AFP 2021 / CHRISTOF STACHE
German Minister of Defense Ursula von der Leyen (C) posing with mountain infantry soldiers of the mountain infantry brigade 23 after she watched an exercise near the Bavarian village Bad Reichenhall, southern Germany, on March 23, 2016
Nevertheless, von der Leyen's assertion that the army is suffering from institutional problems in terms of leadership and attitude was a step too far, since soldiers who contravene the German constitution still constitute a very small proportion of the whole armed forces. It was this assertion that so upset the troops, Rose said.

Von der Leyen's attempt to deflect the blame for the crisis onto the Bundeswehr leadership is particularly unfortunate, since her time in office has not been without mistakes, he added.

"The Minister appeared on Anne Will [a talk show] and declared that the anti-aircraft attack on Syria was justified. Did she not know better? That means she hasn't been properly instructed by her lawyers and that is a management problem. Or, she was trying to deceive the audience, which is a very serious attitude problem. As a Minister, you should be cautious about criticizing others when you yourself have leadership and attitude problems," Rose said.

© AP Photo / Diether Endlicher
Toothless Panzers: Hundreds of Bundeswehr Military Vehicles Kaput
The revelation about Franco A. comes after several reports of misconduct in the German Bundeswehr. In January, Der Spiegel reported on the violent sexual abuse of recruits at barracks in Pfullendorf.

Last week it was reported that army instructors at a barracks in Thuringian Sondershausen verbally abused new recruits, calling them "genetic waste," and forced them to endure long runs that sometimes caused them to physically collapse.

In the aftermath of that report, von der Leyen fired the army's chief instructor, General-major Walter Spindler, in the belief that Spindler's administration did not investigate the claims thoroughly enough.

In addition, the Defense Ministry announced last month it is looking into 275 reported cases of far-right extremism within the country’s military ranks, including soldiers saying "Heil Hitler," performing Nazi salutes and calling for violence against migrants.