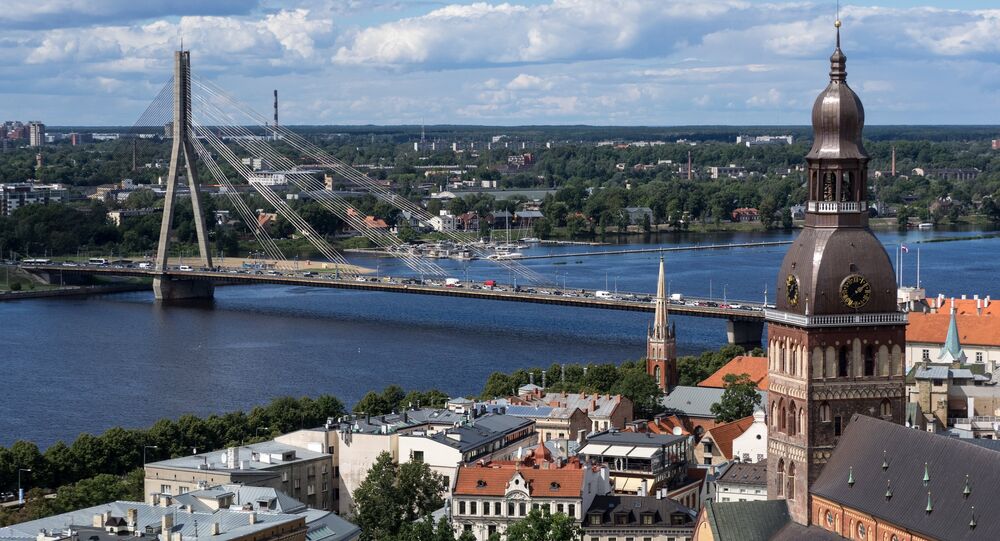 A new poll by European Commission polling agency Eurobarometer shows Latvians' support of membership in the European Union is down to 45%, declining three percentage points since last year. Speaking to Russian media, Baltic politics expert Yuri Dolinsky explained why the country's euro-skepticism is at an all-time high.

The poll's data, published last week, marks a stark contrast to Latvians' attitudes as they prepared to join the bloc. In 2003, ahead of the country's May 2004 accession to the bloc, Riga organized a referendum, with 67% of the population voicing their support for membership.

Fourteen years later, Eurobarometer polling shows that less than half of Latvians now support membership in the supranational union. Latvians are also the biggest 'euro pessimists' in the Baltics, below Lithuania (65% support for membership), Estonia (67%) and the EU average (57%).

Dolinsky explained there are three factors which help explain not only the anti-EU attitudes, but the general pessimism in the country.

"First, of course, is the economy," the analyst said. "Late last year, a study conducted within the framework of the so-called 'Baltic International Bank Latvian Barometer', a monthly study of the moods and attitudes of the country's residents…showed a sharp decline in people's optimism, particularly toward the economy. The expectations that the population associated with accession to the EU are not being realized."

This includes continued difficulties with unemployment (sitting at over 9% as of late 2016). Furthermore, Dolinsky stressed that it's actually very difficult to calculate the real unemployment rate, "since many emigrants [who go to other EU countries] do not declare their departure, and over the last 16 years, the country of about 2 million has lost over 400,000 people, according to official data."

"The second factor behind Latvian pessimism is moral and political," the expert said. "Here there are several problems that are interlinked. Latvians give a low score to the government…Instead of engaging in intensive work in their interests, people see never-ending political intrigue."

© Sputnik / Oksana Dzhadan
Almost 60% of Latvians Disapprove of EU Prolongation of Anti-Russian Sanctions
"For example, thanks to the struggle for the premier's seat, Solvita Aboltina, then the leader of the Unity Party, sacrificed political stability and initiated backdoor scheming against her own nominee – Laimdota Straujuma that was so intense that it resulted in the collapse of the ruling coalition, and Unity ended up losing the prime ministerial post."

"People aren't cattle," Dolinsky stressed. "They understand that this was a struggle between elites not for their well-being, but for control over financial flows," presumably including those coming from the EU.

"It's also worth drawing attention to the fact that polling has repeatedly shown that Latvians would like to see politicians for the post of prime minister who have declared the need to forge good-neighborly relations with Russia – Riga mayor Nils Usakovs, and Ventspils mayor Aivars Lembergs. But in spite of the success of Usakovs' Harmony party in elections, his party was not included in the ruling coalition, and he has been branded a 'Kremlin agent'. Lembergs, meanwhile, has repeatedly faced criminal cases against him."

According to Dolinsky, people see and understand what's going on. "Good relations would improve the situation with the economy. But politically, the ruling class finds it more beneficial to aggravate the situation. After all, the [anti-Russian] sanctions war does not hit the officials and political leaders, but farmers, dairy and meat industry workers, fisherman, and people in the transport sector."

© Photo : Youtube/Nil Ushakov
Self-Confident Cat Interrupts Riga's Mayor to Drink From His Mug
Latvia has been hit hard by the ongoing West-Russia sanctions-countersanctions war, losing hundreds of millions of euros in exports. The country's dairy and fisheries sectors have been hit particularly hard, both facing a drop in total exports by over 30%, according to figures released last year.

Finally, the third cause for pessimism, according to Dolinsky, is the general Russophobia among the Latvian elites, "which poisons the atmosphere in the country" in general.

"Of course, officials may say that they are against the Russian government, not ordinary Russians. But in practice, there are still over 240,000 permanent residents who are called 'non-citizens', who have a special 'non-citizen's passport.' The Russian language is squeezed out of education, although about 30% of the country's population is [Russian-speaking]. The so-called 'language inspection', referred to in the press as the 'language inquisition', penalizes people in the service sector and schools for insufficient knowledge of Latvian. Usakovs was even fined for speaking with Russian schoolchildren in Russian."

"Here, among the Latvian elite's anti-Russian attitudes, I would add war propaganda, which also poisons the mood," the expert added. "It's said that it's necessary to build up the country's strength so that Russia does not attack."

All in all, amid economic malaise, large scale emigration, particularly among Latvia's youth, amid political intrigue and the elite's general anti-Russian posturing, it's not difficult to see why Latvians' attitudes toward the EU are changing, and for the worse.