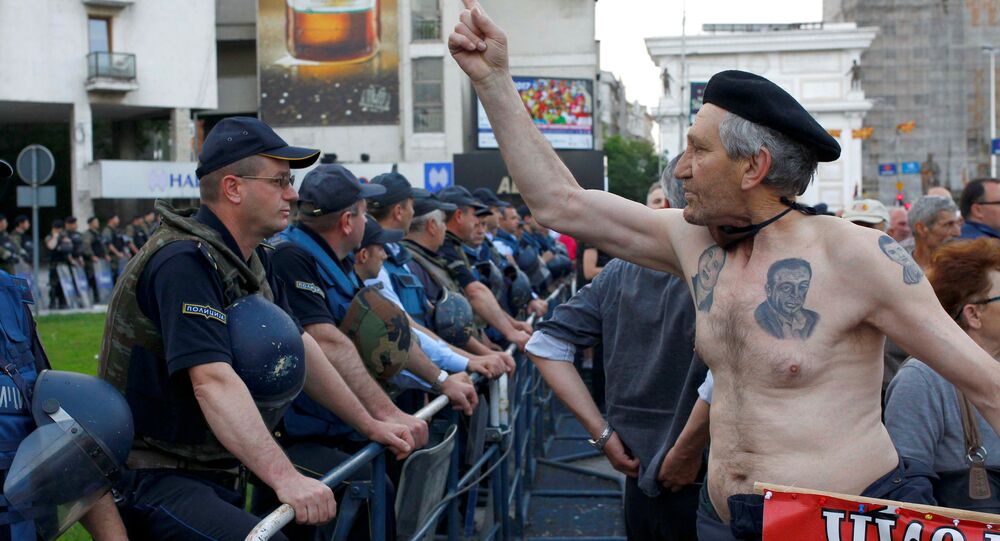 In an interview with Sputnik, Serbian expert Aleksandar Rakovic specifically focused on whether it is relevant to draw political parallels between Macedonia and Ukraine.

© AP Photo / Boris Grdanoski
'Overture to a Coup': Macedonia's Political Crisis May Lead to Country's Disintegration
Some experts have repeatedly pointed to certain political similarities between Ukraine and Macedonia, which both gained independence after leaving fragmenting socialist empires and which both faced a serious identity crisis 20 years later.

In this regard, these experts wonder whether Macedonia and Ukraine will be able to preserve their independence and integrity in the future.

Serbian historian Aleksandar Rakovic, for his part, told Sputnik Serbia that there are fundamental differences between Macedonia and Ukraine; according to him, Macedonia remains a more integral country in this regard.

He recalled that "western Ukraine is populated by Uniates [Eastern Rite Roman Catholics] who are closer to the Poles than to the Russians," and that "in central Ukraine the population considers themselves to be related to Russians, but does not want to sacrifice its Ukrainian identity."

"In Ukraine's Donbass, Kharkov and Odessa regions, many perceive themselves as part of 'the Russian world.' As for Crimea, the overwhelming majority there considers itself Russian, so here we see a wide range of self-identifications. In this vein, the situation in Ukraine is very specific, if not to say the most specific in this part of Europe," Rakovic said.

He added that unlike Ukraine, Macedonia includes only two ethnic groups: Macedonians and Albanians.

© REUTERS / Stringer
Dangerous Precedent: Situation Tense in Kiev Amid Commemorations of Maidan Coup
"The Macedonians are closer to Serbs and although the Macedonian language is similar to Bulgarian, culturally the Macedonians see themselves as part of the Yugoslav tradition," Rakovic said.

Albanians in Macedonia, in turn, consider themselves to be part of a larger Albanian community; many are cooperating with their compatriots from Kosovo and Albania to create so-called "Greater Albania," according to him.

"The Macedonians defend the integrity of their state, but they do not question the identity of the Macedonian Albanians. By doing so, they differ greatly from those who stands for the Ukrainian state in its present form while maintaining a Russian identity," Rakovic added.

He remained skeptical about Ukraine's integrity in the future, recalling that the country has already been split up; Crimea has become part of Russia, although the US and EU refuse to recognize this. Meanwhile, eastern Ukraine's Donbass region is under the control of Russian-speaking Ukrainians.

"The question is what will happen to western and central Ukraine, since these are different parts of the country. What we are witnessing now is a dramatically split in society [in Ukraine]," Rakovic pointed out.

As for Macedonia, it may still preserve its integrity if it agrees on some form of "weak integration" with Serbia, according to him.

"Not that Macedonia should be part of a new Yugoslavia. Serbia does not intend to impose anything on Macedonia — if the Macedonians want to establish an alliance with Serbia, Belgrade will welcome the move," he said.

Unlike Macedonia, he concluded, Ukraine has no one to integrate with, because the project of its association with the EU will never be implemented.