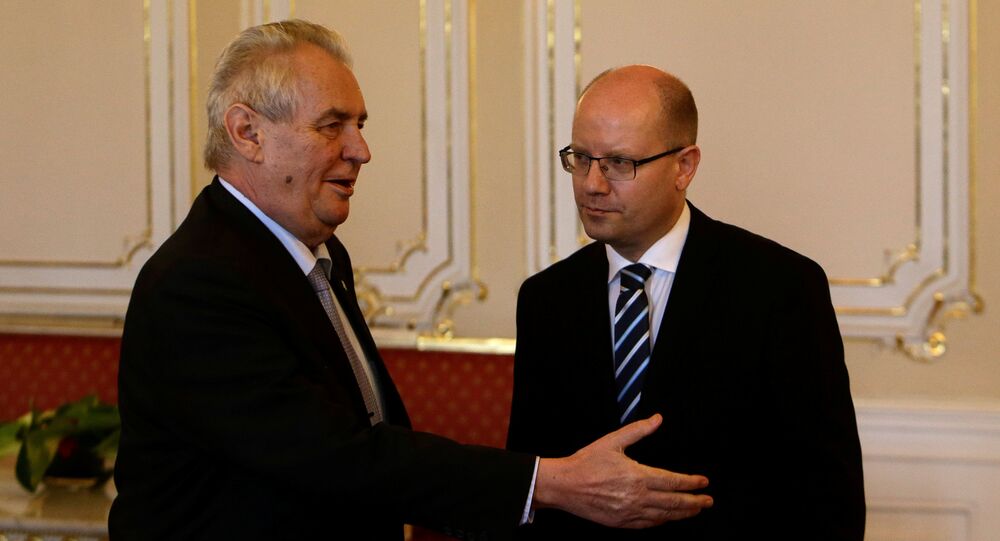 Pavel Belobradek, the head of the governing coalition partner Christian and Democratic Union - Czechoslovak People's Party (KDU–CSL), stated that it would not make sense to speed up parliamentary elections scheduled for October in the Czech Republic after the resignation of Prime Minister Bohuslav Sobotka's government.

© AFP 2021 / BELGA / DIRK WAEM
Czech Prime Minister Announces Cabinet Resignation by Week-End
Earlier in the day, Sobotka said he planned to resign later this month over disagreements with Finance Minister Andrej Babis amid corruption allegations against the latter. Sobotka previously wanted his cabinet to resign on Thursday, but now first plans to provide a plan to promptly resolve the post-resignation crisis as well as handing an analysis criticizing Babis' suspicious business dealings to Zeman.

"Both the president and myself think that it would not make sense to speed up parliamentary elections scheduled for October this year. It will not be possible to properly prepare for them and hold them early even due to technical reasons alone. Furthermore, the president agreed with me that there is no need for a provisional technocrat government," Belobradek told reporters.

KDU–CSL supports keeping the current government makeup with the possible resignation of both Sobotka and Babis, the party leader added.

The governing coalition is made up of the Christian Democrats, Sobotka's Czech Social Democratic Party (CSSD) and Babis' ANO 2011 centrist party.

Babis, who is one of the richest people in the Czech Republic, has been accused of tax dodging to the tune of millions of dollars, partly during his time in office, despite his party's anti-corruption platform. The Czech parliament ordered him to explain his private finances in late April after allegations that a part of his fortune could have been amassed by transferring bonds between entities involved in his business empire without being taxed.