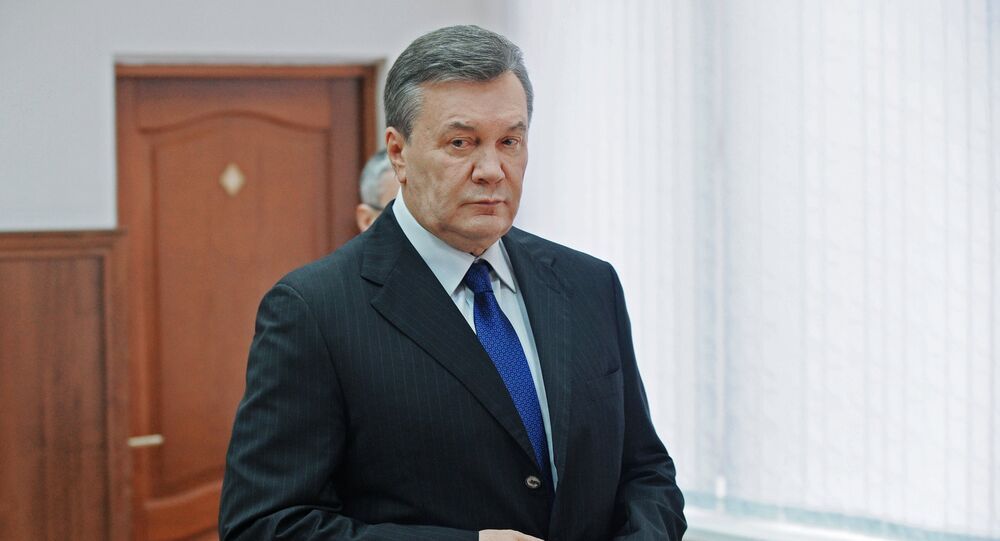 Ukraine's prosecution will seek the highest punishment for ex-president Viktor Yanukovych, accusing him of treason.

"The highest penalty is life imprisonment. The prosecution, because the accused and suspect Yanukovych did not plead guilty during the pre-trial investigation, will only petition for the highest punishment," Kravchenko said.

© Sputnik / Stringer
A Lousy Shot: Ukrainian Army Complains About US-Made Shoddy Cartridges
He also insisted that Yanukovych must personally take part in the hearings and added that the former president's lawyers had not provided any evidence proving Yanukovych’s innocence.

Obolonskyi District Court in Kiev announced a recess earlier in the day until May 18 to allow Yanukovych to take part in preliminary hearings via video linkup.

The treason case against the former president, who had been overthrown in 2014 by a West-fueled coup, was launched in November 2016. On April 11, Ukraine's President Petro Poroshenko signed the law allowing the conviction of Yanukovych in absentia.

© AFP 2020 / TOBIAS SCHWARZ
Poroshenko 'Radicalizes His Rhetoric' as World Starts to Ignore Ukraine
Earlier in the day, the Ukrainian chief prosecutor's office said it would challenge a decision by Interpol to remove the ousted president from its wanted list.

Yanukovych, who now resides in Russia, served as Ukraine's president from 2010 until his ouster in February 2014 by the Ukrainian parliament, when he fled Ukraine in fear for his life. The coup was preceded by months of pro-European protests in Kiev sparked by Yanukovych's decision to postpone the signing of the Ukraine–European Union Association Agreement over unfavorable terms.

Yanukovych: Granting Autonomy Status to Donbass Should Be Decided Via Referendum