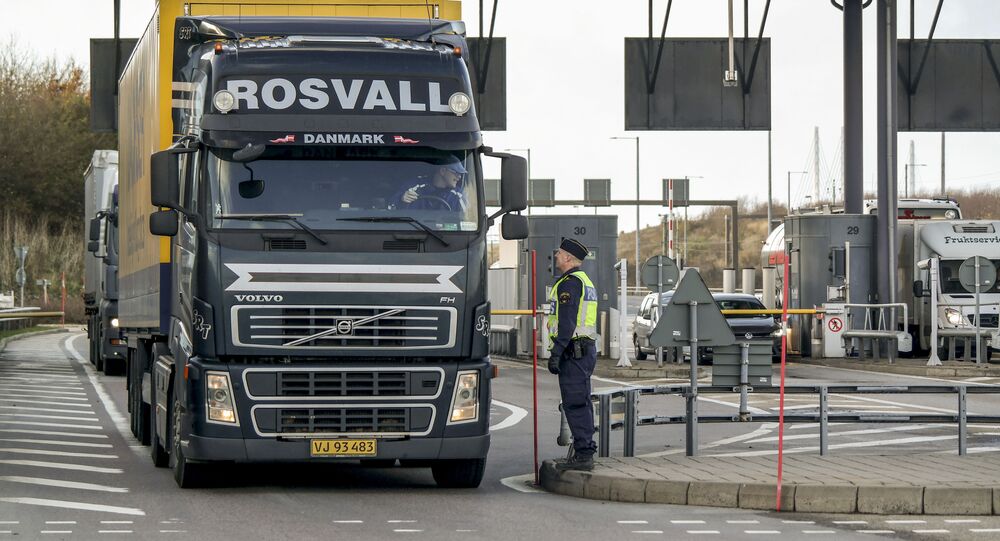 Sweden's decision to drop ID checks after being pressured by the EU has been met with mixed reactions, both in the home arena and in neighboring Denmark. While commuters, integrationists and the liberal left cheered the decision, concerns of a rollback to the pre-migrant crisis situation were also voiced.

© AFP 2020 / TT NEWS AGENCY / ERLAND VINBERG
Sweden's Paradox: Despite Rigorous Border Checks, Migrants Still Slipping Through the Cracks
The decision to abolish ID checks will soon be followed by the repeal of temporary border controls, in accordance with EU guidelines. According to the EU Commission's recent recommendations, "internal" border controls in Sweden, Austria, Germany, Denmark and Norway are to be phased out within six months.

Danish Prime Minister Lars Løkke Rasmussen said he was elated by Sweden's decision, claiming the checks had set back the whole of the Øresund region. The ID checks and border controls were previously reported to have affected jobs, trade, tourism and travel times in the transnational metropolitan area centered around the Swedish region of Skåne (of which Malmö is the capital) and the Danish region of Zealand (surrounding Copenhagen), where thousands of people commute daily across the Øresund connecting the two states.

"The checks have been a significant inconvenience for commuters and others travelers between Denmark and Sweden and have adversely affected the strong dynamic the region has had for decades. It has not been fun to experience it," Lars Løkke Rasmussen said in a statement.

© AFP 2020 / EMMANUEL DUNAND
Social Justice Warriors Wince at Danish Integration Minister's Cake Celebrating Migrant Controls
The news that ID controls had been scrapped also brought great joy to Sweden's Green Youth; the group welcomed the fact that it is now much easier for asylum seekers to come to Sweden, which still seems to have the ambition to become a "humanitarian superpower" as former Conservative Prime Minister Frederik Reinfeldt put it.

"The ID checks have been erased! Now all refugees can reach Sweden's border for asylum. This is something the Green Party been fighting for," Green Youth wrote on Twitter.

"We are in danger of repeating what happened in the fall of 2015 with every step the government takes in this direction," Johan Forsell told the Swedish national broadcaster SVT.

"The resources we possess today are not enough to maintain a close to 100 percent level of border control," the Head of the Border Police Patrik Engström told the Swedish daily Dagens Nyheter.

Last week, Sweden and Denmark engaged in a "blame game," commenting on escalating crime in the Øresund region. Many prominent Danish politicians, including Justice Minister Søren Pape Poulsen, blamed the "imported" crime wave on Sweden's lax immigration politics, which according to him resulted in the emergence of ethnic ghettos. This notion was echoed by Peter Kofod Poulsen of the Danish People's Party, who placed the responsibility on the recent Swedish governments.

"It's incredible that a well-functioning country such as Sweden has degenerated into what we are now witnessing," Peter Kofod Poulsen told the Danish newspaper Jydske Vestkysten. "There has been an explosion in crime and one can no longer deny that it is connected with Sweden's foreign policy," he said.

© AFP 2020 / JANERIK HENRIKSSON / TT NEWS AGENCY
Gang Wars Rage in Swedish Ghettos Despite Officially 'Decreasing' Crime Rate
Malmö Mayor Katrin Stjernfeldt Jammeh, on the other hand, put the blame on Denmark, claiming Copenhagen to be a floodgate of illegal weapons, drugs and liquor to Sweden, as well as a supplier of organized crime.

Sweden introduced border controls in November 2015, followed by ID checks in January 2016 on board trains, ferries and buses crossing the Øresund Strait. The measures were introduced amid a peak in the flow of illegal migrants from Denmark to Sweden.