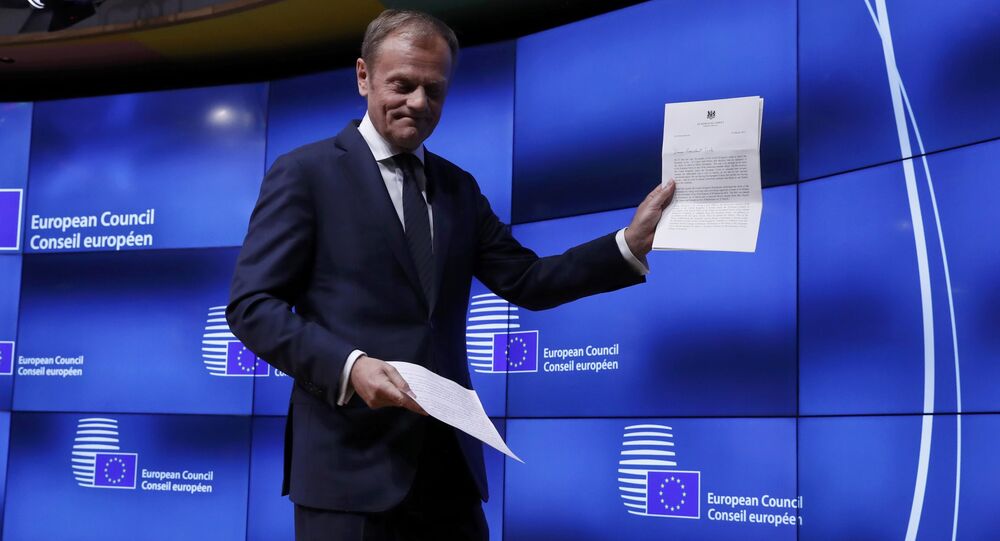 MOSCOW (Sputnik) — Leaders of the EU member states unanimously adopted the guidelines for the upcoming talks between Brussels and London on the United Kingdom’s exit from the European Union, President of the European Council Donald Tusk said on Saturday.

​President of the European Commission Jean-Claude Juncker noted on Saturday that the debate on the guidelines took only 15 minutes.

​According to the text of guidelines released by the European Council, "agreeing reciprocal guarantees to safeguard the status and rights derived from EU law at the date of withdrawal of EU and UK citizens, and their families, affected by the United Kingdom's withdrawal from the Union will be the first [EU] priority for the negotiations."

Besides, the council stipulated that "a single financial settlement… should ensure that the Union and the United Kingdom both respect the obligations resulting from the whole period of the UK membership in the Union" and stressed that future trade negotiations between London and Brussels could not result in a free trade agreement that would amount to participation in the Single Market which the United Kingdom will leave after the Brexit procedures are implemented.

The Union also pledged to prepare itself to the negative Brexit scenario to be able to handle the situation "if the negotiations were to fail."

On June 23, 2016, Britain voted to leave the EU in a referendum, with 52 percent voting to leave the EU. Theresa May, who was appointed prime minister right after the country voted in favour of Brexit, triggered Article 50 on March 29, 2017, formally beginning the process of the UK leaving the European Union.