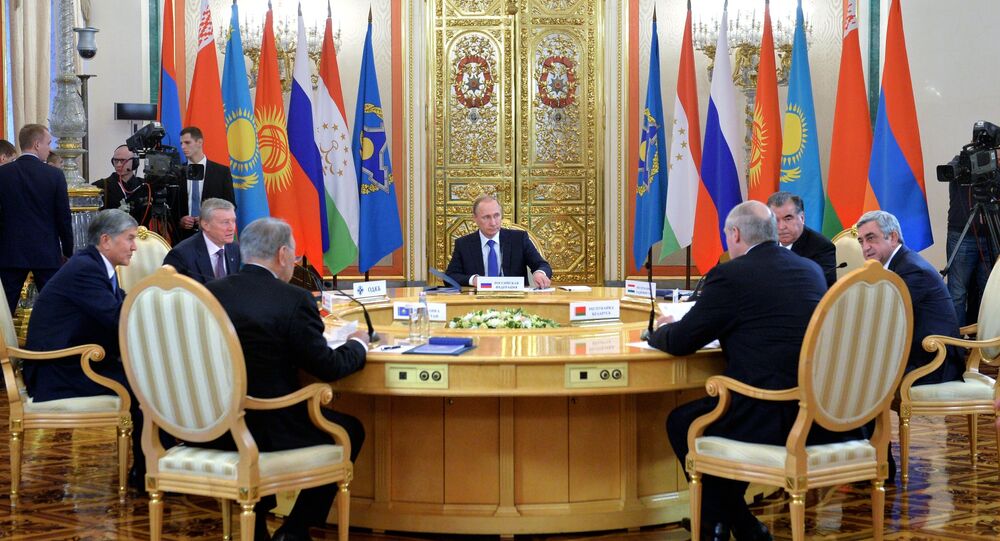 The Belarusian foreign minister said Thursday Minsk is going to focus on resolution of longstanding regional conflicts during the country's presidency in the Collective Security Treaty Organization (CSTO).

MINSK (Sputnik) — Belarusian authorities are planning to pay more attention to the regional conflicts and their settlements during the country's presidency in the CSTO, Belarusian Foreign Minister Vladimir Makei said Thursday.

"We are planning to pay more attention to the settlement of regional conflicts around the periphery of our organization. It is very important, because there are several conflicts we have get used to and we can not come closer to the solution of these conflicts," Makei said in an interview with the MIR TV broadcaster.

© Sputnik / Ramil Sitdikov
CSTO Leaders Informed of Putin's Meeting With Tillerson, N.Korea Not Discussed - Kremlin
He added that Minsk was planning to contribute to the solution of these crises by activating the settlement process.

According to the Belarusian diplomat, the CSTO member states should enhance cooperation at multiple levels.

The CSTO alliance was established on the basis of the Collective Security Treaty, signed by Commonwealth of Independent States (CIS) member states on May 15, 1992. The bloc comprising Armenia, Belarus, Kazakhstan, Kyrgyzstan, Russia and Tajikistan.