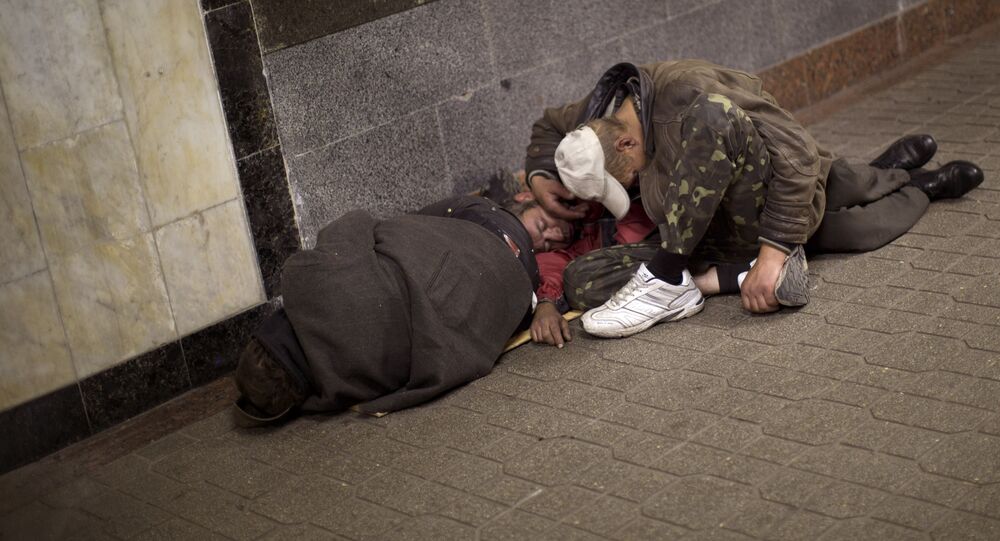 Authorities in the Ukrainian capital are preparing to move Kiev's 20,000-strong homeless population out of the city so as not to "irritate" European guests during the upcoming Eurovision Song Contest, Ukrainian media reports, citing Kiev police.

Kiev officials are preparing to hold the 62nd edition of the Eurovision Song Contest, an event already mired in controversy due to Ukrainian authorities' decision to ban Russian contestant Yulia Samoilova from entering the country.

Among their preparations, city officials have run into a previously unseen 'problem': Kiev's estimated 20,000 homeless population, who face a catastrophic lack of public shelters inside the city itself.

© Sputnik / STR
Eurovision Organizers Unable to Compel Ukraine to Comply With Song Contest Rules - Kremlin
According to Ukraine's Vesti newspaper, authorities have made a decision to round up the homeless and take them out of the city for the duration of the song contest, although they have yet to determine exactly where they should go.

The homeless problem is a major and growing issue in Kiev, but according to Vesti, there are practically no public shelters available, with one large center having closed last winter. According to Yuri Lifance, head of the Community of St. Gilles, the entire city of 2.8 million is now left with only one major shelter. "But it has only 152 beds," Lifance lamented.

To survive, vagrants engage in petty theft, serve as drug and weapons couriers, as paid demonstrators, and even as casual 'agents' for the Ukrainian Security Service. Some also stage car accidents to try to swindle money out of unsuspecting drivers.

According to authorities, the biggest concentration of homeless is found at Kiev's Central Rail Terminal.

Sergei, a patrolman at the terminal, told Vesti that an operation to clear out the homeless is planned, although ordinary officers don't yet know the details.

"We don't know yet where we'll be taking them, but such an operation will definitely take place. We might end up putting them in an open field somewhere outside Kiev," the police officer said.

© Sputnik / Andrey Stenin
This is How Visa-Free Regime Complicates Ukrainian Labor Migration to Europe
Sergei added that although the city's police have carried out similar sweeps before, vagrants continue to return to their old stomping grounds.

The press service of the Kiev police confirmed to Vesti that they are preparing to increase security measures, including a sweep of the homeless, but could not provide any more details about where vagrants will be taken. "This issue is now being decided. The measures are being planned. This should be announced by the chief of police," police spokeswoman Yana Semenyuk told the paper.

Ukraine's population has been facing a very difficult socio-economic situation since the Maidan coup d'etat of February 2014. On Tuesday, Deputy Prime Minister Pavel Rozenko revealed that the country now has about 1.9 million unemployed (or about 9.5% of the total working population of 18 million). Millions of working-age people have left Ukraine for Russia and Europe looking for work. Officials estimate that over 2.1 million working-age Ukrainians are currently living and working in Russia, with up to 400,000 more in neighboring Poland, and tens of thousands more in other EU states.