Sunday's destruction of an OSCE Special Monitoring Mission vehicle in eastern Ukraine comes at a moment that's suspiciously convenient for Kiev, Ukrainian and Russian observers say, particularly as the US and European countries consider a significant reduction in assistance to their Ukrainian partners.

On Sunday, a two vehicle convoy from the Organization for Security and Cooperation in Europe (OSCE) carrying out monitoring in the eastern Ukrainian breakaway region of Lugansk was struck, destroying one of the vehicles. The deadly incident, thought by OSCE chairman Sebastian Kurz to have been the result of a mine blast, killed one US national and injured two OSCE staff members from Germany and the Czech Republic.

© AFP 2019 / THOMAS KIENZLE
Poroshenko Holds Talks With Tillerson, Suggests Deploying UN Mission to Donbass
Shortly after the attack, Ukrainian President Petro Poroshenko spoke to US Secretary of State Rex Tillerson. The president proposed introducing UN peacekeepers into the war-torn region, and accused Russia, which is a guarantor, but not a party to the Minsk peace agreements, of failing to fulfill the deal's provisions.

Russian Foreign Minister Sergei Lavrov commented on the attack by insisting on the need for a "prompt, impartial, transparent investigation." Russia's Foreign Ministry has also issued a separate statement saying that "the circumstances of the incident indicate a high probability of a provocation aimed at undermining the peaceful settlement process in Donbass." 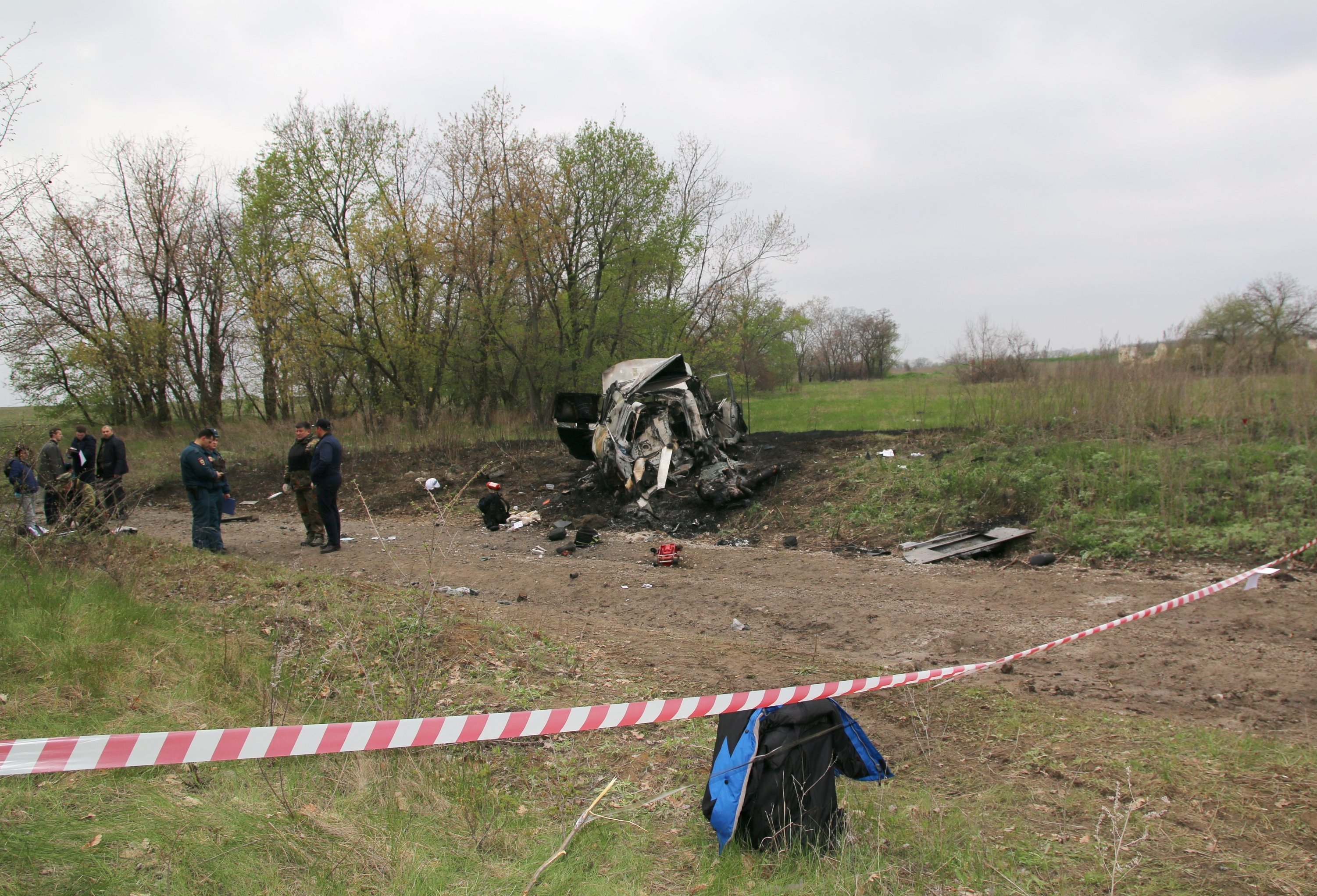 © Sputnik / Lugansk People's Republic people's militia
The site of the explosion of a patrol car of the OSCE’s Special Monitoring Mission to Ukraine, near the village of Prishib in the Lugansk region. One staff member was killed and two were injured as a result of the explosion.

Speaking to Radio Sputnik, political scientist Rostislav Ischenko, president of the Ukraine-based Center for Systemic Analysis, stressed that although he was confident that authorities from the Lugansk People's Republic (LPR) would allow Ukrainian investigators to conduct their investigation into the blast, together with other international investigators, it remains unclear whether Kiev will take advantage of such an invitation, since they do not recognize LPR authorities as a legitimate party for negotiations.

© AFP 2019 / YURIY DYACHYSHYN
End of Free Ride? US Mulling Almost 70% Cut to Ukraine Financial Aid in 2018
More significant, according to the analyst, was the fact that the blast took place at a moment very 'convenient' for Kiev – just in time for EU foreign policy chief Federica Mogherini's fence-mending visit to Moscow. "Furthermore, Poroshenko immediately got an opportunity to talk on the phone with Tillerson, which had not happened before."

"Of course this could have been the accidental explosion of a mine that was placed long ago," Ischenko noted. "But it's also possible that it was not an accident. And then the Security Service of Ukraine would be investigating a terrorist act which it itself organized. This is also possible."

Given everything that's known about the current authorities in Kiev, it's simply not possible to rule out Kiev's involvement, the political scientist stressed.

"It's [also] worth noting that just as an investigation began at the site of the explosion, Ukrainian forces began shelling the area with heavy artillery," he added.

© Sputnik / Eduard Pesov
Mogherini's Visit to Moscow Means EU's 'Anti-Russia Sanctions Futile'
Ultimately, whether accident or provocation, Ischenko emphasized that while officials in the Donbass breakaways have nothing to gain from Sunday's blast, Kiev certainly does. "Kiev has already begun using this attack to push through its initiatives abroad. Officials immediately began talking about the need to introduce UN troops to help control the territory," the expert concluded.

RIA Novosti international affairs contributor Alexander Khrolenko agreed with his Ukrainian colleague, and recalled that the idea of introducing UN peacekeepers from European countries (i.e. NATO members) into Ukraine is nothing new. Poroshenko had signed the corresponding decree over two years ago, in March 2015, although Kiev's Western partners have failed to engage, pointing to the need to involve Moscow in the peace process, Khrolenko wrote.

"Even then, it was already clear to many in Brussels and Washington that such a mission in the Donbass might end leading not to peace, but to coerced peace – i.e. to the continuation of Ukraine's disintegration," the observer wrote. Furthermore, he noted, even the OSCE has said that foreign monitoring of the breakaways' borders with Russia would be possible only after the Donetsk and Lugansk regions are constitutionally defined in a new Ukrainian constitution, the creation of which is something Kiev continues to stall. 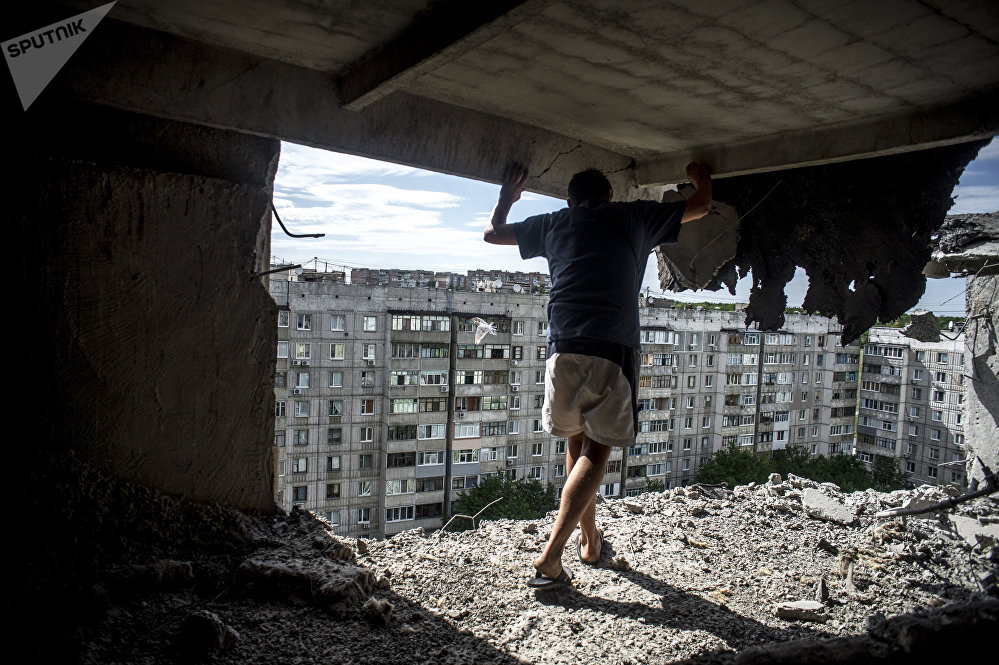 "Donbass," Khrolenko noted, "has stood in the way of the Maidan for four years now, and is leading Poroshenko into a state of despair. Kiev is probably still hoping to exact revenge militarily, even after the devastating defeat at Debaltsevo [in 2015] and three years of mindless shooting from all calibers of weaponry at their civilian compatriots in the east."

© AFP 2019 / Tobias SCHWARZ
Merkel Confirms German Citizen Injured in OSCE Mission's Car Blast in Donbass
Kiev's dream of a contingent of UN troops in eastern Ukraine "would allow it to secure the Donbass cauldron with their own forces," the expert said, with authorities insisting that the foreign troops come exclusively from European (i.e. NATO) countries, "without the participation of peacekeepers form Russia or the Commonwealth of Independent States."

In truth, Khrolenko noted, what Kiev now needs is a reality check. After all, for UN forces to begin a mission in Ukraine, they would need to receive the approval of the UN Security Council and its five veto-endowed permanent members, including Russia.

"Russia is a permanent member of the Security Council and has the right of veto. If a group of countries attempts to 'solve' the Ukrainian problem without taking account of Russia's interests, Russia will certainly use this right. And since the fundamental decision to introduce UN troops, including their composition and powers endowed to them, also depends on Russia's position, it's technically impossible to convert Kiev's abstract peacekeeping operation into a military operation using NATO troops." 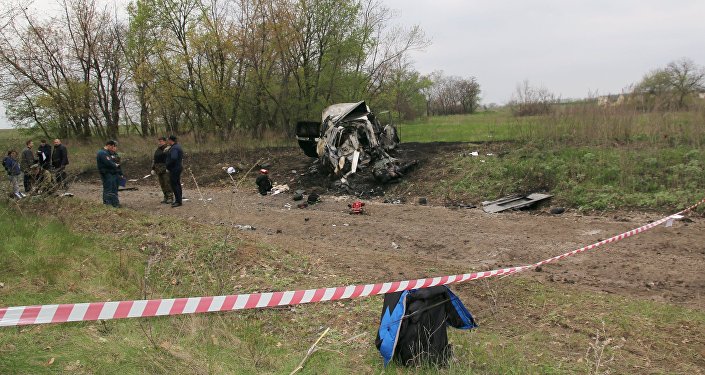 © Sputnik / Lugansk People's Republic people's militia
OSCE Probing Deadly East Ukraine Monitoring Mission Car Blast
Ultimately, Khrolenko emphasized that Kiev's goals here are obvious. "Growing economic problems and the country's militarization are leading Ukraine to chaos. Against this background, Poroshenko's hopes for 'kind peacekeepers' from the UN arise from his sense of uncertainty in the future. With such requests for military assistance, the president demonstrates his own inability to ensure order in his own state, and even a geopolitical naiveté. After all, the effectiveness of peacekeeping operations is usually extremely low." This is true in Kosovo, in Cyprus, in the various conflicts in the Middle East and dozens of UN peacekeeping operations around the world, Khrolenko recalled.

Ultimately, the journalist stressed that "if uncontrollable processes develop in Ukraine, a UN peacekeeping mission in the conflict zone will definitely appear – and it will include Russian representatives, whether or not Poroshenko might wish it. In any case, the fate of Ukraine will be solved taking into account the geopolitical interests of Russia, which Western powers should not have ignored beginning in December 2013 [when the Maidan 'revolution' began to pick up steam] and even before then."

OSCE Car Explosion in Donbass Seems to Be 'Provocation' - Moscow