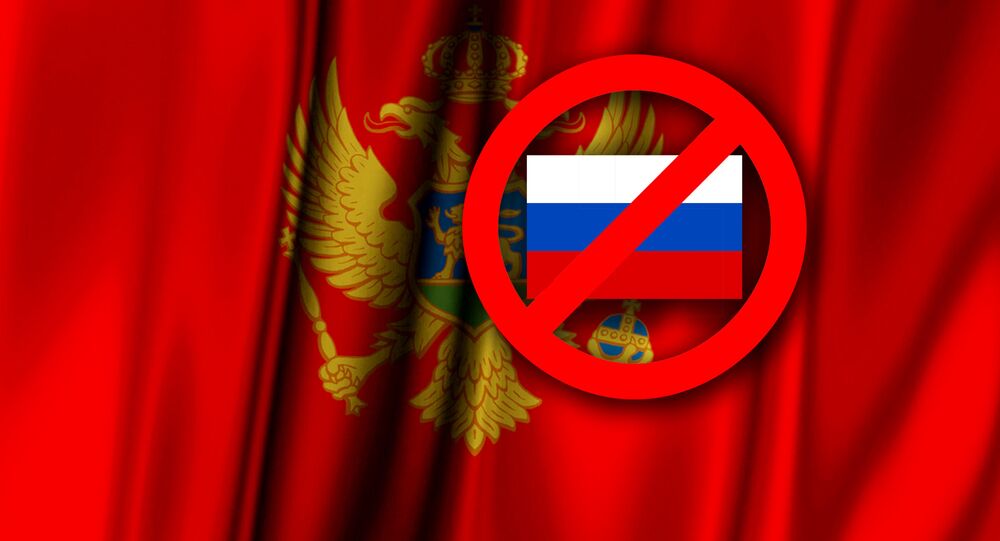 Why the Russophobia Campaign in Montenegro is Doomed to Boomerang

As the Parliament of Montenegro is set to vote on the ratification of the country's agreement with NATO on its accession to the block later this week, Sputnik Serbia examines the anti-Russia campaign in the country and looks how it might backfire on the political life of the country.

The negative attitude of the Montenegrin ruling elite towards its people and Russia has been noted long ago. The culmination of the process is expected on April 28 in Cetinje, Old Royal Capital of Montenegro, where the country's parliament is set to vote on the ratification of the agreement with NATO on Montenegro's accession to the block," reads the analytical article of Sputnik Serbia on the issue.

"A dramatic decline in bilateral relations provoked by Podgorica (the capital city of Montenegro), the upcoming accession of Montenegro to NATO and the Montenegrin authorities’ decision to join all the EU sanctions against Russia provide the backdrop for an upsurge in anti-Russia hysteria," Zakharova said at her weekly briefing on Thursday, when replying to a media question about the situation with Russian citizens in Montenegro.

"The general attitude to Russian business and Russians is becoming increasingly negative, and the ruling coalition is fostering a hostile attitude in Montenegrin society towards Russia and Russian citizens. In this situation, we cannot rule out the possibility of provocations, arrests of Russians on questionable charges and their extradition to other countries, primarily the United States," she added.

"The rise in anti-Russia sentiments, which is not typical of Montenegrins, is the doing of the country’s political authorities. The recent decision by Podgorica to grant a 90-day visa-free entry to Russian citizens is a ploy that cannot hide changes in the attitude towards Russia that is being fostered to please the West," the spokeswoman stated.

© REUTERS / Ints Kalnins
Montenegro's Government Hinders NATO Referendum - Lawmaker
The comments of Maria Zakharova are enough to understand the basic line of relationship between new Montenegro and Russia not only for serious political analysts, but for ordinary people, says Sputnik Serbia. Ordinary people want one thing while the authorities, who think as ordered by Washington and Brussels, pursue something entirely different.

In such small countries as Montenegro, everyone knows what others think, it says.

The only explanation why the authorities do not want to adhere to the will of the majority of their people is a fear to lose the power. The negative attitude of the ruling elite towards its people and Russia is being supported by the remarks of Milo Đukanović (former Montenegrin Prime Minister) and his oligarchy and recent baseless accusations of the Kremlin of a coup d'etat attempt during the parliamentary elections in the country (October last year).

Sputnik Serbia notes that the decision on NATO accession is being made by the parliament and not at a public referendum. Thus the opposition Democratic Front (DF) have announced its protests and appealed to the rest of the opposition to join them on Friday, April 28, the day of the parliamentary vote.

"It is of primary importance to the West that Russia's long-time ally Montenegro, which had been once called Serbian Sparta, joins the alliance and becomes a symbol of its germinating power. It is yet another signal to Moscow that the Balkans are currently under the boots of the US, even though they still have little room for maneuver," the website says.

© REUTERS / Francois Lenoir
Moscow: Montenegro’s Course to Join NATO Without Referendum Counterproductive
It further suggested that the ruling regime of Montenegro will lead to the loss of its identity and ties with Serbia and to the escalation of tensions in the society as the majority of Montenegrins are against the accession. Otherwise such a decision would have been made at a referendum. The positive parliamentary decision, it says, will lead to the confrontation with Russia.

"On the one hand, Moscow understands only too well what the key NATO's positions in Europe are. Montenegro is not on the list. Hence it would be ridiculous to suppose that Moscow might take any responsive measures and form any special military units for an attack on Montenegro," the website says.

"On the other hand, it does not mean that the Kremlin will graciously watch it and that Montenegro won't experience any consequences of such destructive policies. The only question is how long Montenegrin people will remain victims of such egoistic decisions of a small bunch of politicians," it finally stated.