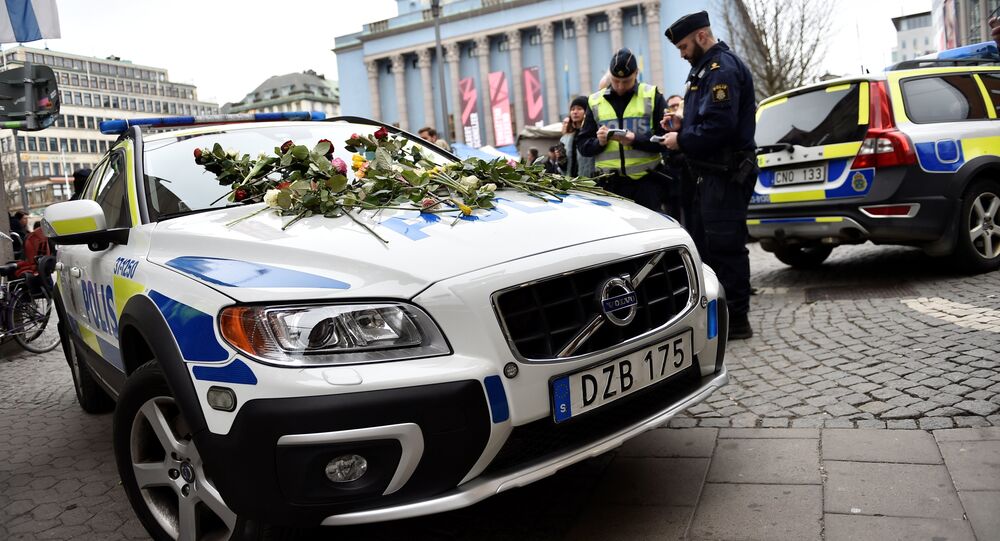 The truck attack in Stockholm, doubtlessly the bloodiest in Sweden's history, can trigger other radicals in the Nordic country to follow suit, Swedish experts maintain. Swedish society is claimed to be powerless in dealing with Daesh returnees and homegrown radicals, let alone stopping their interaction with the international Islamist community.

© AFP 2021 / PER WISSING / SCANPIX SWEDEN
Swedish Muslim Association Risks Losing State Funding Over Misogyny, Extremism
The Stockholm truck attack, which killed four people dead and injured 15, left many Swedes asking themselves what could possibly be done to prevent it from ever happening again. According to experts, Sweden's efforts to combat extremism are deficient in many ways.

"The work that has been done so far, in some sense equals lost years," National Defense College researcher Peder Hyllengren told the Swedish daily Dagens Nyheter. "The truck attack on Drottningsgatan can definitely trigger others, because it seems simple. You don't need any special knowledge of how to manufacture a bomb or something. Here, it's basically about being able to push the accelerator pedal to the metal," Peder Hyllengren said.

Of late, Swedish MPs have been engaged in cross-party talks about measures to combat terrorism, involving fast-track investigation, camera surveillance and enhanced information gathering rights. According to National Defense College senior researcher Magnus Ranstorp, these measures are insufficient and arrive too late, as Sweden already evolved into an "economic crimes paradise." Ranstorp pointed out that organizations banned in, for instance, Germany, are free to raise funds and propagate openly in Sweden.

© Photo : W.carter
Provocative Play 'Humanizing' Terrorists Shakes Sweden After Truck Attack
Another question the Swedish politicians most often miss, according to Ranstorp, is the foreign funding.

"A lot of money opens from the Gulf states such as Qatar and Saudi Arabia. They finance activities that are anti-democratic and may end up in violent Islamism. However, there is no discussion as to whether foreign countries should be allowed to fund mosques and the like," Magnus Ranstorp told the Swedish daily Svenska Dagbladet.

Svenska Dagbladet columnist Ivar Arpi went previously so far as to call Sweden a "Mecca for terrorists." In a scathing opinion piece earlier this month, Arpi highlighted the lack of procedures to charge jihadists and put them behind bars. As a result of Sweden's legislature, which demands irrefutable proof of war crimes, defectors who have murdered, raped and pillaged in the name of Daesh may go unpunished for lack of evidence.

"In Sweden, it is perfectly legal to join a terrorist organization like Daesh. Yep, it's actually true. One can go to Syria and join Daesh, and unless the authorities succeed in proving that the person actually been there fighting, he can return without problems as if it were a regular holiday. Even if it is beyond reasonable doubt that the person has been involved with Daesh," Ivar Arpi wrote.

© AP Photo / Markus Schreiber
Swedish Authorities to Use Lions to Keep Terrorists Away From Stockholm's Streets
Magnus Sandelin, journalist and the author of "Swedish Daesh Warriors, From al-Qaeda to Jihadi Cool" argued that Sweden has been exploited as a "safe haven" for supporting Islamist terrorism since the early 1990s. According to Sandelin, recruitment, propaganda and fund-raising were all carried out from Sweden, which he called an exporter of terrorism.

"Undoubtedly, this lax attitude to our domestic jihadist environment has facilitated terrorism abroad, which has harvested many innocent victims. Until now, however, terrorism has been at a convenient distance from the Swedish public," Magnus Sandelin wrote in his opinion piece in Expressen, arguing that Swedish laws should have been changed long ago.

Yet another problem linked to the truck attack is the problem of refused asylum seekers. Uzbek terrorist Rakhmat Akilov was found to be only one of thousands of asylum seekers slated for deportation who had disappeared from the radar of Swedish authorities. In the Nordic country, the Swedish border police are tasked with tracking down people who stay in the country illegally, keeping an eye on the external border, as well as monitoring airports, ferry terminals and the country's over 100 border crossings.

"From the Migration Board, we have 17,750 cases, of which 12,222 have gone underground," Patrik Engström, of the National Border Police told Swedish national broadcaster SVT. "Well, it's like looking for a needle in a haystack," he added.

© Photo : Swedish Green Party facebook
It's Not Easy Being Wrong: Swedish Greens Hit Rock Bottom After Reversing Position on Illegal Immigrants
According to him, it is extremely unlikely that these people will choose to leave Sweden voluntarily. Moreover, the horde of illegal immigrants is expected to grow further, as Sweden is moving on with processing the 163,000 asylum applications it received in the record year 2015. By his own admission, Engström was expecting between 40,000 and 60,000 new cases in the coming years, of which two thirds will go missing.