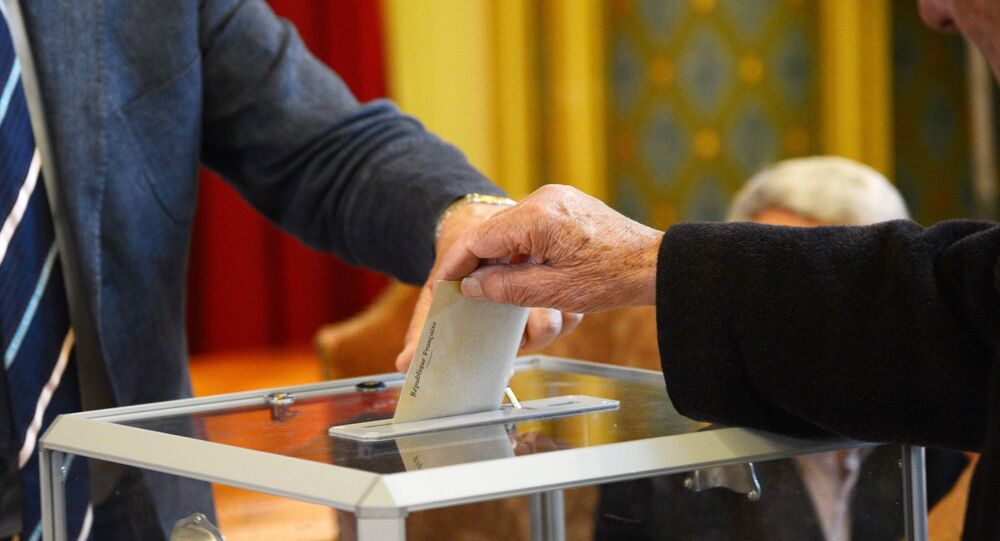 MOSCOW (Sputnik) — En Marche! movement founder Macron and National Front (FN) leader Le Pen, who, according to preliminary French Interior Ministry information with almost all votes counted, garnered 23.86 and 21.43 percent of votes respectively, cleared the first round of French presidential election on Sunday and are now heading to the run-off on May 7. The Republicans (LR) candidate Francois Fillon and independent leftist Jean-Luc Melenchon fell behind with under 20 percent each, while current President Francois Hollande's Socialist Party candidate Benoit Hamon got just over 6 percent.

The election followed a turbulent year in French politics, which was marked by an upsurge of security concerns amid a wave of terrorist attacks, an unprecedented influx of migrants and refugees from the Middle East and Africa and a corruption scandal involving Fillon. In the wake of the events, Le Pen pledged to take France out of the European Union, restore borders, crack down on migration and leave NATO. In turn, Macron offered a model of centrist populism and campaigned on a pro-EU platform.

Both Macron and Le Pen are outside of the mainstream and the summary rejection of Fillon and Hamon amounts to a voters' protest, Vincent Pons, an assistant professor at the Harvard Business School, told Sputnik.

"I think that Emmanuel Macron taking the lead over other candidates after the first round of French presidential elections first expresses the rejection of mainstream political parties. Macron has campaigned on being neither right, nor left, and the candidates of the mainstream Parti Socialiste and Les Republicains, which have governed the country for decades, are both eliminated, a result which is unheard of," he said.

© Sputnik / Natalia Seliverstova
Russia Respects France's Choice in First Round of Election - Kremlin
The upcoming run-off will, therefore, be a race between the pro-EU and the eurosceptic projects, the expert added.

Swing to the Left?

Le Pen's result was slightly below figures predicted by the polls ahead of the election. The last polls before "silence day" on Saturday indicated around 22.5 percent support for the right-wing leader, a percentage point below the preliminary result.

This, however, is also a symptom of rebellion against the mainstream, as most of the defectors had switched from one end of the spectrum to another and cast their vote of protest for left-wing Communist-backed Melenchon instead amid his rise beginning mid-March, Pons explained.

"This vote share is a bit lower than what the Front National was hoping based on some poll estimates, which results from her losing votes to Jean-Luc Melenchon, on the far-left, who also proposed to withdraw France from existing European treaties, and to Emmanuel Macron, who also campaigned against mainstream parties," he said.

© Sputnik / Kristina Afanasyeva
Macron, Le Pen Advance to Second Round of French Presidential Vote
Macron's victory, however, may not mean a sway away from the left, experts noted. Macron's En Marche! was formed just a year ago and does not have any parliamentary representation, thus likely forcing Macron to rely on other parties, such as Melenchon's Unsubmissive France, for support in the upcoming legislative elections. En Marche! has already voiced its intention to take part.

"My sense is that Le Pen has done considerably worse than she thought she would, and that Melenchon did much better. Since Macron does not have a party in parliament at the moment, he's going to have to build coalitions — probably with the Left, i.e. Melenchon — to obtain a majority," LSE Associate Professor of Political Economy Bob Hancke told Sputnik.

Macron's likely victory shows that his blending of the right-left divide has struck a nerve with the French electorate, he added.

France's final political landscape will settle after June's parliamentary elections. Until then, the parliament will remain dominated by the Socialist Party and The Republicans.