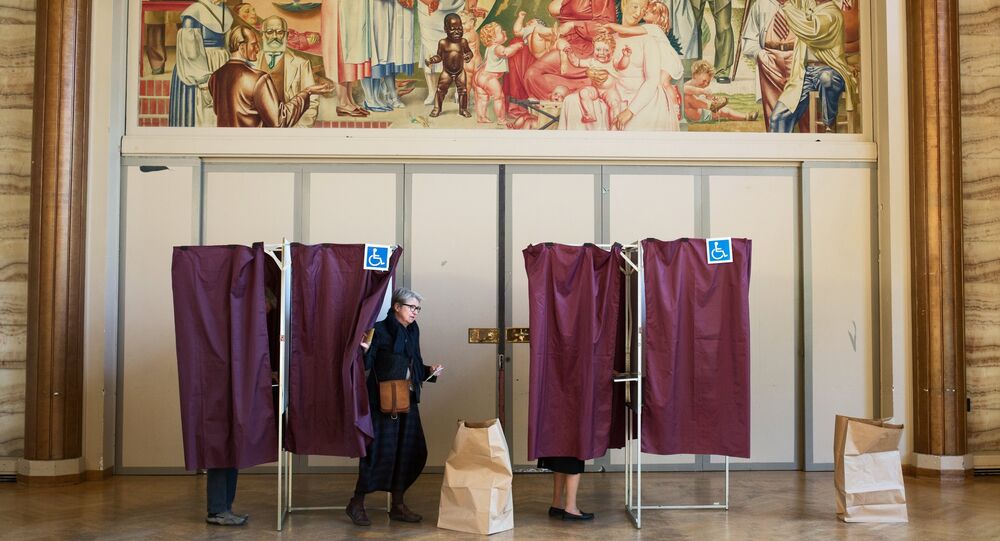 As the polling stations which opened in continental France on Sunday in the first round of the country's presidential elections, political analyst Anatoly Vasserman took a closer look at the main candidates for France's top job.

In a commentary for Sputnik, Anatoly Vasserman said that of these four, Francois Fillon is the only representative of the country’s old political establishment.

He once served as a Cabinet minister under President Nicolas Sarcozy, who brought France back into NATO’s fold and organized the assassination of Libyan leader Muammar Gaddafi.

“Still, compared with Francois Hollande, even the not-so-successful members of the pro-Euro-Atlantic government of Nicolas Sarcozy are viewed by many as people under whose guard France was moving forward,” Vasserman said.

This is probably why the Hollande administration has been trying so hard to undermine Fillon’s chances of being elected.

Marine Le Pen represents a political tradition that is even older than the one espoused by Fillon.

She is an ardent critic of the classical liberal economic theory of a global division of labor, according which the whole world one big enterprise where each country does what is prescribed by a single center.

This, however, is thought by many in France to undermine the very idea of national sovereignty and other time-tested values of the past. That’s why  Eurosceptics like Marine Le Pen, who are trying to re-establish traditional values, are seen by the liberal establishment – both right and left – as enemies and even fascists.

“That’s why I believe that when answering pollsters’ questions, many in France who support Le Pen choose not to mention her name even though she is exactly the one they might vote for. This is also why I think that her actual rating is much higher than reported even though it is not enough to land her a first-round victory,” Vasserman said.

He added that, unlike the majority of pollsters, he was not sure that Le Pen will lose out in the May 7 run-off.

© REUTERS / Robert Pratta
A Look at How France Chooses its Leader
Anatoly Vasserman believes that if in the second round Le Pen faces off with the independent hopeful Emmanuel Macron, this would increase her chances for victory because despite all the calls not to vote for the “dangerous” Le Pen, Macron is still seen by many as  a political appointee of those who brought Francois Hollande to power five years ago.

“No matter how hard he tries to portray himself as a ‘neutral’ and ‘independent’ candidate, everyone sees that many leading members of Hollande’s Socialist party have urged people to vote for Macron instead of their party’s own candidate,” Vasserman noted.

He added that before he entered the race, Emmanuel Macros had spent some time working as an investment banker and a member of Francois Hollande’s Cabinet.

“Macron’s inability to clearly outline his priorities reminds me of Mikhail Gorbachev. It could so happen that if Macron becomes president, France could repeat the fate of the Soviet Union under Gorbachev,” Vasserman warned.

Far-left presidential hopeful Melenchon, who initially had a low level of public support, has enjoyed a surge in popularity in the polls during recent weeks and has a rather ambitious presidential policy, which includes plans to rewrite the constitution, tax the rich at a rate of 100 percent, devalue the euro and withdraw France from NATO.

© REUTERS / Martin Bureau/Pool
Outcome of Election in France Could Have 'Profound Implications' for World
Anatoly Vasserman said that just like in the case of Marine Le Pen, many in France who support Melenchon won’t say so when answering pollsters’ questions. People who plan to vote for far-right or far-left candidates are usually more tight-lipped about their plans than those who support “centrist” candidates.

“I believe that having Le Pen and Melenchon in the run-off would be the best option for France because none of them will do France any harm,” Vasserman concluded.

The second round of the French presidential election is slated for May 7. According to recent polls, centrist candidate Emmanuel Macron and National Front hopeful Marine Le Pen have equal chances to win the first round, with voting intentions figures for both of them varying from 24 to 26 percent.